BDS: boycott, divest and sanction Israel as a way to end the military occupation of Palestine received a ‘shot in the arm’ with a UN report by the ESCWA titled: “Israeli Practices towards the Palestinian People and the Question of Apartheid.”

“Israeli Practices towards the Palestinian People and the Question of Apartheid” issued by ESWA Executive Secretary Rima Khalaf was published on 16 March 2017, accused Israel of imposing an “apartheid regime” of racial discrimination on the Palestinian people.

This was the first time a UN body has stated the obvious!

Israel’s Foreign Ministry spokesman responded by claiming the “Israeli Practices towards the Palestinian People and the Question of Apartheid” report was similar to a WW II Nazi propaganda publication that promoted anti-Semitism.

Richard Falk, a former UN human rights investigator for the Palestinian territories, and Virginia Tilley, professor of political science at Southern Illinois University, authored the ESCWA report “Israeli Practices towards the Palestinian People and the Question of Apartheid.”

Before leaving his post as UN special rapporteur on human rights in the Palestinian territories in 2014, Falk said Israeli policies bore unacceptable characteristics of colonialism, apartheid and ethnic cleansing.

The United States accused Richard Falk of being biased against Israel.

The ESCWA report concluded on the “basis of scholarly inquiry and overwhelming evidence, that Israel is guilty of the crime of apartheid.”

The report said the “strategic fragmentation of the Palestinian people” was the main method through which Israel imposes apartheid, with Palestinians divided into four groups oppressed through “distinct laws, policies and practices.”

The report affirmed, “Israel has established an apartheid regime that dominates the Palestinian people as a whole.”

After UN Secretary-General Antonio Guterres asked that the report be remove from the agency’s website Khalaf responded by calling the report the “first of its kind” from a UN agency to shed light on “the crimes that Israel continues to commit against the Palestinian people, which amount to war crimes against humanity.”

I am not oblivious to the vicious attacks and threats the UN and you personally were subjected to from powerful Member States as a result of the publication of the ESCWA report “Israeli Practices towards the Palestinian People and the Question of Apartheid”.

I do not find it surprising that such Member States, who now have governments with little regard for international norms and values of human rights, will resort to intimidation when they find it hard to defend their unlawful policies and practices. It is only normal for criminals to pressure and attack those who advocate the cause of their victims.

I cannot submit to such pressure.

I also believe people should not only have the freedom to speak truth to power, but they have the duty to do so.

I …stand by the findings of ESCWA’s report that Israel has established an apartheid regime that seeks the domination of one racial group over another. The evidence provided by this report drafted by renowned experts is overwhelming. Suffice it to say that none of those who attacked the report had a word to say about its content… 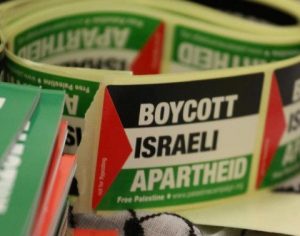 Erdan has already set up an intelligence unit to collect information on foreign BDS activists.

Israel’s Strategic Affairs Minister Gilad Erdan claimed that the information collected on BDS activists would be assembled primarily from open sources [such as this blog] on the Internet and social networks such as Twitter, Facebook and Youtube.

Haaretz columnist Gideon Levy took to YouTube to issue this calls for all Israelis to stand up and say: ‘We’re all BDS supporters’

Last week, American Israeli Professor Jeff Halper, a co-founder of ICAHD/Israeli Committee Against Housing Demolitions was leading another tour of an Israeli settlement in East Jerusalem, when police arrested him [again] on suspicion of “incitement” because of his pro-BDS position.

An apartheid society is much more than just a ‘settler colony’. It involves specific forms of oppression that actively strip the original inhabitants of any rights at all, whereas civilian members of the invader caste are given all kinds of sumptuous privileges.

Evictions and home demolitions have become the status quo in the so-called Holy Land and since 1967 with over 24,000 dwellings -averaging eleven people per unit- bulldozed by Israeli forces because they interfered with settlement expansion.

On July 5, 1950, Israel enacted the Law of Return by which Jews anywhere in the world, have a “right” to immigrate to Israel on the grounds that they are returning to their own state, even if they have never been there before.

In 1953, South Africa’s Prime Minister Daniel Malan becomes the first foreign head of government to visit Israel and returns home with the message that Israel can be a source of inspiration for white South Africans.

In 1962, South African Prime Minister Verwoerd declares that Jews “took Israel from the Arabs after the Arabs had lived there for a thousand years. In that I agree with them, Israel, like South Africa, is an apartheid state.”

On August 1, 1967, Israel enacted the Agricultural Settlement Law, which bans Israeli citizens of non-Jewish nationality- Palestinian Arabs- from working on Jewish National Fund lands, well over 80% of the land in Israel. Knesset member Uri Avnery responded: “This law is going to expel Arab cultivators from the land that was formerly theirs and was handed over to the Jews.”

On April 28, 1971: C. L. Sulzberger, writing in The New York Times, quoted South African Prime Minister John Vorster as saying that Israel is faced with an apartheid problem, namely how to handle its Arab inhabitants.

Sulzberger wrote: “Both South Africa and Israel are in a sense intruder states. They were built by pioneers originating abroad and settling in partially inhabited areas.”

Prime Minister Begin orally promises Carter to freeze all settlement activity during the subsequent peace talks. Once back in Israel, however, the Israeli prime minister continues to confiscate, settle, and fortify the occupied territories.

Effectively, this divides the West Bank into at least two non-contiguous areas and multiple fragments.

Palestinians would have no control over the borders around them, the air space above them, or the water reserves under them.

Barak calls it a generous offer. Arafat refuses to sign.

In their “Declaration by South Africans on Apartheid and the Struggle for Palestine” they proclaim:

We, South Africans who lived for decades under rulers with a colonial mentality, see Israeli occupation as a strange survival of colonialism in the 21st century. Only in Israel do we hear of ‘settlements’ and ‘settlers.’ Only in Israel do soldiers and armed civilian groups take over hilltops, demolish homes, uproot trees and destroy crops, shell schools, churches and mosques, plunder water reserves, and block access to an indigenous population’s freedom of movement and right to earn a living. These human rights violations were unacceptable in apartheid South Africa and are an affront to us in apartheid Israel.

October 23, 2001: Ronnie Kasrils, a Jew and a minister in the South African government, co-authors a petition “Not in My Name,” signed by some 200 members of South Africa’s Jewish community stating: “It becomes difficult, from a South African perspective, not to draw parallels with the oppression expressed by Palestinians under the hand of Israel and the oppression experienced in South Africa under apartheid rule.”

Three years later, Kasrils will go to the Occupied Territories and concluded: “This is much worse than apartheid. Israeli measures, the brutality, make apartheid look like a picnic. We never had jets attacking our townships. We never had sieges that lasted month after month. We never had tanks destroying houses. We had armored vehicles and police using small arms to shoot people but not on this scale.”

April 29, 2002: Boston, MA. South African Archbishop Desmond Tutu says he is “very deeply distressed” by what he observed in his recent visit to the Holy Land, adding, “It reminded me so much of what happened in South Africa.”

The Nobel peace laureate saw “the humiliation of the Palestinians at checkpoints and roadblocks, suffering like us when young white police officers prevented us from moving about.”

Referring to Americans, he added, “People are scared in this country to say wrong is wrong because the Jewish lobby is powerful—very powerful. Well, so what? The apartheid government was very powerful, but today it no longer exists.”

Jonathan Ben Artzi a nephew of Israeli Prime Minister Benjamin Netanyahu, refused to serve in the IDF and went to jail for 18 months pleaded with US:

Sometimes it takes a good friend to tell you when enough is enough. As they did with South Africa two decades ago, concerned citizens across the US can make a difference by encouraging Washington to get the message to Israel that this cannot continue…

In 2012, THIS AMERICAN upped her call for BDS of Israel into a run for US HOUSE on a platform that included ending USA collusion in Israel’s military occupation of Palestine, Israel’s nuclear apartheid and to end the USA Government cover-up of Israel’s June 8 1967 attack on the USS LIBERTY:

Eileen Fleming is the Health Reporter and Senior Non-Arab Correspondent for USA’s TADN,