The 20-page report “Human Rights Focus on Israel-Palestine” is, like the other eleven Reports, by the Sustainable Investments Institute (Si2), which explains: ”This report aims to give investors information to help further navigate the debate about operating in Israel and the Occupied Territories, ask informed questions and productively engage with companies more generally. Implementation of corporate human rights policies and steering a careful course through the divisive scene in the region presents both risks and opportunities for multinational companies in the region and their shareholders.”

The Report is available at HolyLandPrinciples.org — under ” Other Key Reports.” 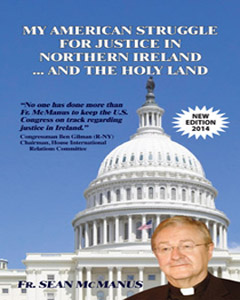 Among other things, Si2’s Report states: ”The U.K.-based EIRIS Foundation launched a database of companies operating in occupied lands. The EIRIS Conflict Risk Network carried out the underlying research into corporate activity in Crimea and Palestine, which is designed to provide ‘businesses, civil society, media and the investor community [with] access to objective and comprehensive information about corporate operations in these two occupied territories.’ The EIRIS database was partly motivated by the Holy Land Principles shareholder resolutions.”

The Report sums up the attitude of American companies operating in the Holy Land thus: “To date, company responses to campaigns specifically related to Israel-Palestine have been muted. Most refer to their general human rights policies, saying that these relate equally to their global operations. Many such policies include a commitment to the tenets of the UN Guiding Principles for Business and Human Rights, also known as the Ruggie Principles. While some readers may see this as adequate reassurance of good corporate practice in the region, others may consider it insufficient or even contradictory, given a UN interpretation that the settlements violate the Fourth Geneva Convention.”

Si2 also reports: “A June 2013 report by Kav LaOved and the Workers Hotline, funded by the European Commission, is entitled “Arab Citizens of Israel and Work: Trends of Workplace Discrimination and Violation of Labor Rights.” It reviewed Israeli government public data, as well as original research, and found:

Fr. Sean McManus, President of the Capitol Hill-based Holy Land Principles and Irish National Caucus said: “I hope this independent Report is of value to all concerned about fair employment by American companies doing business in the Holy Land. While those companies cannot be expected to solve ‘international issues,’ they are most certainly expected to practice fair employment. That is the limited, but key, mission of the Holy Land Principles. Who could be opposed to that? We are filling a vacuum that was crying out to be filled.”