Thus Palestine has always been within the belly of Israel

In recognition of the Balfour Declaration’s 100th anniversary this year, British Prime Minister Theresa May told the Conservative Friends of Israel last December that the Balfour Declaration “is one of the most important letters in history. It demonstrates Britain’s vital role in creating a homeland for the Jewish people. And it is an anniversary we will be marking with pride.”

The Balfour Declaration was just a letter in November 1917, but it became the biggest diplomatic triumph for Zionist goals in the Middle East.

One hundred years ago the Jewish presence in Palestine was around ten percent of the entire population of the piece of real estate many call the Holy Land. 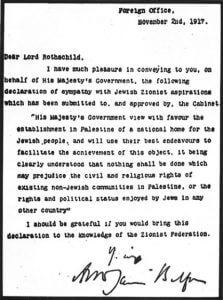 “His majesty’s Government view with favor the establishment in Palestine of a national home for the Jewish people, and will use their best endeavors to facilitate the achievement of this object, it being clearly understood that nothing shall be done which may prejudice the civil and religious rights of existing non-Jewish communities in Palestine, or the rights and political status enjoyed by Jews in any other country.”

The formula is simple and it’s reduced to four words every kid in the world knows: Tell me a story. It’s that easy.

As I told the Palestinian side of the story of the Balfour Declaration in my first historical fiction, it follows:

Jake and Harold had finished filling seven deer feeders scattered throughout their privately-held four thousand acres of wetland an hour east of Orlando, on the outskirts of the rural town of Christmas. The two men were in partnership with a group of professional businessmen, who had purchased the undeveloped acreage as an investment. Jake, Harold, and a few other partners also used the property as a hunting preserve.

While riding in a dilapidated camouflaged Jeep on the way back to camp, Harold yelled, “Hey, look! There are two deer in the clearing — nice fat does.” Jake cut the engine and the men sat in silence, watching the deer graze. Out of the thick palmettos, a twelve-point and a young buck with peach-fuzzed antlers appeared. The men watched in awe as the deer fed. When the majestic stag raised his eyes to the men and snorted, they all turned and bolted.

Further down the dirt road, Harold yelled once again, “Look, I think there is another herd way over there.”

“Oh, guess my eyes aren’t what they use to be.” Harold pulled out a purple velveteen sack that enrobed his bottle of Crown Royal and asked, “Care for some sustenance, Jake?”

Jake shook his head as he lit a cigar and grabbed a Tab from the cooler at his side. “You know, Brother Harold, I cannot get my neighbor’s problem off my mind. It’s usually my patients that keep me awake. But all day, I keep seeing this poor guy’s face. He’s worried about his wife, and there is cause for concern. If that weren’t enough, he’s on this mission to help save the world. I’ve told you about all of that, remember?”

Harold snorted affirmatively, and Jake continued, “Dr. Diab has more passion and commitment to social justice issues than anyone I have ever personally known. He is flying to Cairo Tuesday night, and I just told him his wife’s condition is unstable. For the past year, he has been working out a deal with the president of the Arab Fund for Social and Economic Development in Kuwait. He did this while working fifty hours a week at Martin Marietta. He has this incredible vision of linking the twenty-two Arab countries via modern telecommunication systems. He rounded up nine Arab-Americans with advanced degrees and lucrative positions to quit their jobs, go back to their homeland, and help their people. This Dr. D is an incredible person. He’s a Muslim, but he’s a better Christian than a lot of Christians I’ve known.”

“Yeah, man, I know exactly what you mean. But what I just don’t get is why those people over there keep fighting each other. If they are all so religious, why don’t they do what their religions teach and treat each other the way they want to be treated?”

Jake eased naturally into his other role of teacher and lecturer, and launched into a history lesson. “This modern conflict between Palestinian Arabs and Jews began around the turn of the twentieth century. The two groups have different religions; and do you understand that ‘Palestinian’ means Muslims, Christians, and Druze? The animosity towards Israel is not about religious differences, but about land. The UN divided the area known as Palestine into three parts in 1947: Israel, the West Bank, and the Gaza Strip. This is a very small geographical area, about the size of Maryland.

“Imagine carving up the state of Maryland, forcing the folks out of their homes without paying them, and ripping up their deeds. It really is an unjust situation, and things are more out of hand all the time. This morning, when we were discussing if he should go or not, I had a sense of uneasiness that had nothing to do with doctoring. Something I can’t put my finger on, like a bad premonition — but now I am sounding like my wife!”

Brother Harold nodded and rubbed his protuberant abdomen before responding. “Well, you don’t have to be a psychic to know bad stuff will keep on happening over there. What’s the deal with the UN? Why can’t they maintain peace there?”

“Well, the United Nations was the body that carved up the borders, and that is what led to the 1948 war. In November of 1947, even though the Arab Nations disagreed with the boundary lines, the UN went ahead with their plan. You see, after the fall of the Turkish Ottoman Empire, Britain had taken control of the land via a mandate whose time had run out. With Britain withdrawing from the area, the Jewish people flooded the region, claiming not just the territory given to them by the UN, but also places like Dr. D’s hometown. It was Palestinian territory, according to the UN. Come on, why should the Palestinians have to pay the price for the Nazi’s sins?

“Imagine the outrage, and you can understand why the Arab nations that surround the area formerly known as Palestine attacked the new state of Israel. That was the war of 1948. Since then, there have been two more wars, in ’56 and ’67, and I won’t be surprised when another happens. Understand, these attackers are being born and bred in the refugee camps. Imagine being young and healthy, and having no prospects or future. There is not much else to do but make babies. And they most certainly have been busy doing that. The Palestinians no longer have a nation, so they cannot get passports to migrate elsewhere.

“The group known as Fedayeen, which means ‘self-sacrificer,’ was born in the despair of the refugee camps. These men have given up hope of returning to their homes, which mostly have been torn down and rebuilt by the Israelis now. These Fedayeen do not only sacrifice themselves; they kill innocent people. They are homicide bombers! This naturally causes retaliation, which sets into place the continuing cycle of violence and destruction.”

“So why exactly does your friend want to go back over there?”

“He is a man with a vision and a passion. He is committed to justice for both sides, and he believes he can make a positive difference. If you knew him personally, Harold, you would believe it, too.”

Harold lifted his almost empty pouch of Crown Royal and exclaimed, “Let’s toast the man, and then I’ll tell you what my daddy told me when I was a kid, when my brothers and I would get out of hand. He’d say, ‘boys, you all are going the way of Cain and Abel, and you’d better quit. For one of those boys was filled with so much hatred and jealousy that he killed the other.’

“Then my old man would be on a roll, and he’d tell us about Sarah, Abraham’s wife. And we loved to hear that part, so we’d quit our fight. You see, although Sarah was already menopaused, she still desired a child. God had even shared a laugh with her about it coming true, but just like a woman, she took the matter into her own hands, and refused to wait for the Lord to deliver. So old Sarah decided to give her maidservant to her old man, and that chick and Abraham made a kid. Everything was fine when Ishmael arrived, but only for a very short while.

“Now, although Sarah was a dried-up old crone, she, too, birthed a son, and named him after the laughter she had shared with God, but called the kid Isaac. Sarah had gotten very territorial and demanded Abraham cast out his beloved first son with his mama Haggar, into the barren wilderness, and Abraham did it! But, as God always hears the cries of mothers and sons, he promised to make a great nation from Ishmael’s descendants, too. And thus, the Arab nation was born.

“By the sixth century before Christ, the conflicts in the land were already old news, and Jeremiah warned the people that all God could see was violence and destruction in the city. Sickness and wounds were all around.

“And then my old man would get tears in his eyes and softly recite:

And every tiny kindness you have ever done, every gentle word spoken, every time you held your tongue, every positive thought, every smile freely given, every helping hand that opens, helps bring in the kingdom.

And the kingdom comes from above, and it comes from within. Imagine a kingdom of sisterhood of all creatures and all men.

Harold stroked a tear away with the velvet pouch that held his Crown Royal, drew the last swig and offered up, “Godspeed to Dr. D on his mission from God.” [End chapter]

Dr. Diab’s dream was to blanket the land many call holy with fruit bearing trees rooted on both sides of Israel’s Wall because man made walls can fall in a day; but the walls some men erect in their hearts and minds may never fall.

Dr. Diab departed this world in 2015, but his dream lives within those he inspired to have a heart for Palestine and a gut to challenge Zionism.

In this 90 second excerpt from 30 Minutes with Vanunu  Israel’s nuclear whistle blower invites Hillary Clinton and “all the Christians to come and see the real wailing wall-the apartheid wall.”

She is currently writing her 10th book