Who Speaks for American Muslims?

The Islam American Muslims practice is distinctly different than the Islam practiced elsewhere in the world. America strips the culture out of religion and what Muslims see is religion sans culture, and we hope the pristine Islam that cares for God‘s creation, and essence over rituals will be restored in time. We have taken a small step for Muslims, and it would be a giant leap for Islam.  Praise the Lord!

The overwhelming majority of Muslims are moderate. However, there are not enough speakers out there to articulate what these Muslims actually believe and practice, and their significant contributions to America.

Those who had a morally corrupt agenda filled the gap and spoke negatively about Islam. Unfortunately, their version became the currency and so many Americans fell for it in the absence of the right information.

Everyone wants to see a cohesive America where no one has to live in apprehension, tension or fear each other. The Center for Pluralism, also known as the America Together Foundation has embarked on a mission to train speakers to deliver the message of Islam, as practiced by American Muslims ?which is distinct from Islam practiced elsewhere in the world.

There is no doubt that a few “Islamophobes” are out to get Muslims; they are well paid to do so. But in the same vein, Muslims would not be well served to believe that “all of them” are of the same ilk. These Islamophobes are simply afraid of what the “Islamists” are doing in the name of Islam and worried sick about its ramifications for America. Rationally they know it is not in America, but still the phobia persists.

We have an obligation to listen to our fellow citizens and a moral duty to allay their fears.

Pulitzer Prize winner Judith Miller speaks out on Fox News, “It is the fear that so many Muslims who are moderates, the fear they have of speaking out and the reaction of their own community. Until we win that battle inside, the Jihadists will take center stage. We are going to go on creating the impression that the Islamists Jihadists are the majority and they are not.” Brigitte Gabrielle of Act for America adds, “Where are the funders of people like Mike – is there not a mega millionaire in the Islamic world who can say, you know what I believe in your moderate message and can give Mike $5 Million dollars to build the grass root organization?” Here is a video:

Radical Muslims on the March | Mike Ghouse and Bridgett Gabrie…

The right leaning Muslims curse Gabrielle, Spencer and Geller out, while the left discounts them, leaving the moderates to deal with the issue. What I hear them say is simply this: Where are the mainstream Muslims to speak out about what they practice? The mainstream Muslims have reached the point of zero tolerance towards extremism and have the desire to assertively seek to push the literalists to see the essence of Islam.

The most sustainable way to counter Islamophobia and violent extremism is through education. Our programs are designed to bring Americans together; the more we see each other in social, cultural, civic, religious, political and other settings, the less divisiveness there will be, resulting in fewer misunderstandings and misperceptions between us.

This is the Islam of Moderate Muslims

Muslims are not arrogant and do not reject the validity of other spiritual paths. They believe that Islam is one of the many spiritual paths that bring support to an individual in dealing with the difficulties of life.

The Quran is a book of guidance to restore harmony within oneself, and harmony with others through a variety of values listed below.

Moderate Muslims are mainstream Muslims; they have no barriers between them and God’s creation. They are free from prejudice towards others.

They have an inherent sense of equality with respect to men and women.
They do not flaunt their religion at every opportunity. They will seldom say you will go to hell.

Social life is easy with them, they mix and mingle. They will go to a bar with you, and while you drink alcohol, they will quietly drink water or soda and not make a production out of their religion. If you invite them for dinner, they quietly eat what suits them and you don’t have to be stressed out about what to cook for them. They appreciate it if you are conscious that Muslims don’t eat pork products.

They are not hell bent on converting or missionizing others, as they see other paths as equally valid. They will not engage in the upmanship battle either.

As most White, Black, Jewish, Hindu, Sikh or Christian parents do, Muslim parents will neither compel their children to observe religion strictly, nor do they throw fits if their kids marry outside their faiths. Personalizing faith is an America value!

Most Muslims may not even talk about religion, it is not important to them, what is important is knowing and caring for their neighbors and respecting and honoring fellow beings, consistent with the Golden Rule.

Sharia is not coming to America nor do American Muslims want the kind of Public Sharia practiced in Saudi Arabia and Iran. American Muslims believe in personal Sharia – that is how you pray, fast, share what you have, care for fellow humans. Let’s “clear the air” of misunderstandings for all Americans. We need to put this fear behind us and focus on prosperity and living our lives. American Muslims uphold, protect, defend and celebrate the values enshrined in our American Constitution. Our faith reinforces the idea of one nation with liberty and justice for all.

These characteristic accurately describe the vast majority of mainstream American Muslims. They quietly practice their faith; and don’t feel the need to make a show of their religion.

The process of telling the American Muslim story has begun. It started with Sean Hannity of Fox News – he was the first one to bring a mainstream Muslims on his show. Before that, Muslims were usually represented by bearded men wearing religious costumes. Let me clarify, the beard and Hijab are not the determinants of one’s moderation or religiosity, they are cultural in nature and are a personal choice.

Gone are the days when you were not Muslim enough to speak about Islam if you did not wear the beard or hijab; did not throw in a ton of Arabic phrases; and did not wear some exotic sort of symbolic body and head covering associated with Islam.

What Islam is not is ruling others or compelling others to believe against their will. The Quran is clear on that, no one bears the burdens of others and no one is responsible for other’s actions. What Islam is, is freedom to believe as you will, and freedom to choose between right and wrong. And it is very much about taking responsibility for one’s words and actions.

American Islam is minding your own faith, and letting others mind theirs.

Islam is about spirituality – that is, becoming one with nature (God) where all walls fall that divide you from the others.

Islam is pluralism – that is, respecting the otherness of others and accepting the God-given uniqueness of each one of us. You’ll learn all about this in our class, replete with references from the Quran and the prophet’s practices. It simply can’t get more authentic than that!

The New Breed of Muslim Speakers

Nothing will change without intention and effort. If we wish for speakers who reflect the values of the majority, we have to find and encourage them.

Fortunately, we have begun this process. 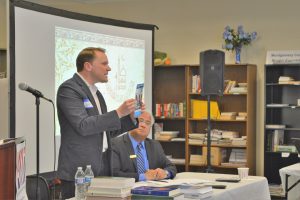 ues are taught: First Amendment, responsibility and accountability, truthfulness, justice, forgiveness, caring for fellow beings, humility, equality, and pluralism, freedom of speech, harmony, and civil dialogue. In a nutshell, this is Islam.

Many people, and many Muslims themselves, have been hungry for speakers who spoke about the values of Islam, and now we have taken the first step towards it.

We have just completed the first course, held in metro Washington, DC. Subject to funding, the next course will be a three weekend 15 hours course to be held in May 2017 also in DC. The training is open to people of all faiths, and indeed, at least one non-Muslim has already completed it. Anyone with the knowledge of good universal human values and a heart for harmony within the human family can pick up the training and speak for Islam, the American Islam.

If you are looking for speakers on Islam, we have a good lineup available. They graduated from the Muslim Speakers training pr 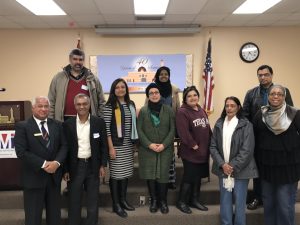 ogram and are ready to speak on the values of Islam, the values that contribute towards making the world a better place for every human being. They speak of Islam as it is, the inclusive Islam practiced by contemporary American Muslims.

Here is a statement from each of six graduates about what they can speak about. 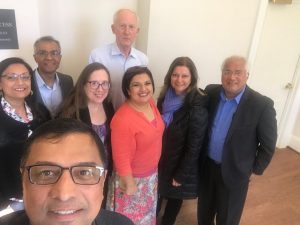 Charles Stevenson: “I can speak as a Catholic friend of Islam and as a childhood son of Northern Virginia’s rural American South, and as a citizen passionate about building an American future built on the rocklike foundation of harmony in diversity.”

Rina Hafiz: “I am a bridge of understanding to help other cross over and experience the view points of both the west and Islam. I’ve loved and enjoyed the diversity having lived on both sides of the globe; I am an American, a soccer mom and a Muslim woman who feels empowered by my faith.”

Rashed Hasan: I can speak as an American Muslim Professional, who studied engineering at MIT and business at The Wharton School, and have taken a deep dive into the Qur’an to understand Islam at its core in terms of values and principles, not just rituals. I am currently publishing a series – Removing the Middleman – putting values and principles from the Qur’an in the context of our contemporary lives and societies. It will give you a sense of what to expect when I speak about Islam, religious plurality and our common humanity for our generation.

Fatima Argun: I can speak about the value of diversity in today’s America and why it is important for shaping cohesive, collaborative and resilient communities. To that end, interfaith dialogue and true understanding of those in a community that are different than oneself is at the heart of creating a more harmonious, peaceful world.

Shagufta Hasan: “I can speak on how it was to grow up in the suburbs of Pittsburgh as a young Muslim girl, and later as a mother helping my children understand and navigate the challenges of their adolescent lives and guiding them to focus on the values and morals that are taught in Islam to become a good human being.”

Mike Ghouse is the president and executive director of the Center for Pluralism. An interfaith, pluralism and a Muslim Speaker, thinker, writer, organizer, human rights activists, newsmaker and a pluralist committed to building cohesive societies with a belief that what is good for Muslims has got to be good for the world and vice versa to sustain peace, harmony and prosperity. He is a conflict mitigater and a goodwill nurturer offering pluralistic solutions to Media on issues of the day. http://www.mikeghouse.net/