Shame on the men and women who hurl curses at President Jimmy Carter at every opportunity they get – all we see on the internet is ugliness displayed towards him. What is wrong with their sense of gratitude? Of course, a majority of good decent Israelis respect and honor him, but we don’t hear much from them, it is time for them to speak up, lest not the world think they are ungrateful people. 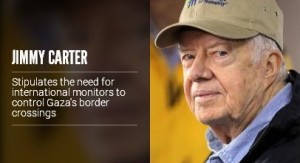 The Israelis should kiss his feet, he is the only man in the difficult Jewish history who brought a real sustainable security to Jews; he removed a major enemy of Israel by forging a friendship agreement with Egypt. Carter is a peace maker, and has the balls to do the right thing. I wish Obama was man enough to stand up to Netanyahu to get him to do the right thing; instead he buckled to Netanyahu, who is not good for Israel’s long term security, neither his actions will mitigate the rise in Anti-Semitism across the globe.

President carter locked Begin and Sadat in a room and told them to come to agreement or rot in there. It took tremendous courage on his part, despite the attempts by right wing lobby to derail his work and the end his courage and wisdom won for Israel. Israelis should be grateful to their savior and honor him by building a statue in his name at Ben-Gurion Airport.

The book he wrote on Apartheid in Israel is good for Israel in the long run; you cannot bury your head in the sand and deny it. Apartheid is not good for Israel, as it was not good for America or South Africa. Apartheid is expressed in so many ways, including the stinky attitude that does not value the lives of Palestinians and justifies killing them; they can be spared. I am concerned about the abnormal guilt laden people Israel will have in the future. It is not good for Israel. Talk to Iraqi veterans, Vietnamese Veterans and thoughtful Israeli soldiers and others, they know injustice towards others impairs their mental balance.

A good Jewish Scholar disappointed me severely. He and I worked together on a few projects, and then he disappeared and would not return my calls or emails. One day at a Synagogue I was a greeter; he walked in, saw me and walked away in a hurry, as if I were a land mine. I was not going to let that happen and ran up to him. He did not like a bit, when I pointed that as a scholar like him, should give me a reason for his cold shoulders. He looked at me with disgust and said, “Take that xxx xx x xxxxx Carter off your website” then I will talk with you. He did not want to elaborate and simply walked away and I kept looking at him in disbelief; such a hatred for your savior?

President Carter is being attacked on facebook again, “He accuses Israel of committing “deliberate attacks on civilians.” And responses were like, “Major. Asshole”,”Nasty old man, a liar as well as a fool.” Someone wrote Fxxx him. This is disgusting. Those few men who ‘curse’ him should repent and pray for him. No one has done more good to Israel than Jimmy Carter. None!

Of course, a majority of good decent Israelis respect and honor him, but we don’t hear much from them, and all we see on the internet is ugliness displayed towards him. Evil persists if we don’t speak up, and we have to speak up to bring awareness to the moderate Jews that they need to speak up.

I am glad Jimmy Carter has the vision and foresight to call on US, EU to recognize Hamas, indeed, I am writing a piece, it is good for Israel to have working relationships with its purported enemies and friends, if not who will they make peace with? Duh! It is time for the right wingers to sit on the side lines, and watch good things happen without their animal instincts. Let Jimmy Carter be in the middle again, God has blessed him to be a peacemaker. May he bring security to Israel and Justice to the Palestinians, Amen!
………………………………………………………………………………………………
Mike Ghouse is a public speaker, thinker, writer and a commentator on Pluralism at work place, politics, religion, society, gender, race, culture, ethnicity, food and foreign policy. All about him is listed in several links at www.MikeGhouse.net and his writings are at www.TheGhousediary.com and 10 other blogs. He is committed to building cohesive societies and offers pluralistic solutions on issues of the day.