Until my first trip to both sides of The Wall in the so called Holy Land I was a ‘church lady’ who taught Sunday School to middle and high school students at an Episcopal Church.

After my first of eight trips since 2005, I did not return to that church or any Christian institution because I had encountered Jesus not as my God but my brother:

A social justice, radically nonviolent Palestinian devout Jewish road warrior who challenged the job security of the Temple priests by teaching the people there was no need to pay for ritual baths or sacrificing livestock to be OK with God; for God already LOVED them just as they were: sinners, poor, diseased, outcasts, widows, orphans, refugees and prisoners all living under a brutal Military Occupation.

Two thousand years ago the Cross had NO symbolic religious meaning and was not a piece of jewelry.

When Jesus said: “Pick up your cross and follow me,” everyone then understood he was issuing a POLITICAL statement, for the main road to Jerusalem was lined with crucified agitators, rebels, dissidents and any others who disturbed the status quo of the Roman Occupying Forces.

What got Jesus crucified was disturbing the status quo of the Roman Occupying Forces, by teaching the subversive concept that God preferred the humble sinner, the poor, diseased, outcasts, widows, orphans, refugees and prisoners all living under a brutal Military Occupation above the elite and arrogant.

The term ‘Christian’ was not coined until the days of Paul, about 3 decades after Jesus walked the earth as a man.

The early followers of Jesus were called members of THE WAY-meaning THE WAY he taught one should be:

Nonviolent and live according to what God requires which is “Be just, be merciful, and walk humbly with your Lord.” -Micah 6:8
In the latter days of Nero’s reign [54-68 A.S.] through the domination of Domitian [81-96] Christians were persecuted for following the nonviolent, loving and forgiving Jesus.

The most decisive event in the history of Christendom occurred in 313 AD, when Emperor Constantine legitimized Christianity and those who had once been considered rebels began to enjoy political power and prestige.

100 years after Constantine, the Empire required that all soldiers in the army must be baptized Christians and thus, the decline of Christianity began.

Before Emperor Constantine brought Christianity into the mainstream, all the early Church Fathers taught that Christians should never serve in the army but willingly suffer and NOT inflict harm on any other. Clement, Tertillian, Polycarp and every other early Church Father taught that violence was a contradiction of what Jesus was all about.
With the justification of war and violence supplied by Augustine’s Just War Theory, wrong became right and nothing much has changed in two millennia.

Rev. Emmanuel Charles McCarthy is a priest of the Eastern Rite of the Catholic Church in communion with the Bishop of Rome, the Pope. He has been a Catholic priest since he was ordained on August 9, 1981, in Damascus, Syria.

On August 14, the Feast Day of Maximilian Kolbe, he wrote:

The story of St. Maximilian Kolbe is fairly well known. He was a Franciscan priest with an intense spiritual relationship with Jesus’ mother, Mary, who founded a monastery in Nagasaki that survived completely intact the August 9, 1945 atomic bombing of that city, and who on August 14, 1941, at Auschwitz, freely offered to lay down his life for a Jewish man with a family, Franciszek Gajowniczek, who had been selected to be killed in retaliation for the escape of some prisoners. The man and his family were at Maximilian Kolbe’s canonization by John Paul II in 1982.

St. Maximilian Kolbe in this act of nonviolent, dying to self-love at Auschwitz on behalf of that man is an excellent witness to defending others in a Way utterly consistent with the Way of Jesus and with the Will of the Father of all as revealed by Jesus.

His is a witness to Christlike, nonviolent, self-sacrificial love (agape) of a neighbor, even if one does not even know him or her personally.

So, St. Maximilian Kolbe has been officially designated by the Church as a Martyr of Charity.

Charity is the English translation of the Latin word, caritas, which is the Latin translation of the Greek word agape, which in the New Testament is used 318 times out of the 338 times that love appears as a noun, verb or adjective. (The other 18 times the Greek word for love that is employed is philia, as in the city of brotherly love, Philadelphia.)

The word martyr derives from the Greek word for witness, martys.

In its original meaning, the word martyr, meaning witness, was used in the secular sphere as well as in the New Testament.

The process of bearing witness was not necessarily intended to lead to the death of the witness, although this could be a consequence…

The early Christians who first began to use the term martyr in its new sense, saw Jesus as the first and greatest martyr, on account of His crucifixion in fidelity to the Word of God…

One of the aspects of Maximilian Kolbe’s Christlike martyrdom in Christ, with Christ and for Christ and for those whom Christ came to save is that he did not know if it was going to work or make any difference for the man.

Christlike, nonviolent, agapic creativity, courage, truthfulness and fidelity in presenting the spoken Word, the written Word and the lived Word is what the Church needs now from its popes, cardinals, bishops priests, ministers and pastors.

It does not need any more of the travesty of expanding that deceitful illusion of Jesus’ moral teaching, Catholic Just War Theory, into where it had never gone before, namely, into the wide open spaces of selectively chosen cross-border interventionist “humanitarian” military slaughter to stop selectively defined and interpreted crimes against humanity.

Continuing to pass-off such thinking as morally compatible with the teachings of Jesus simply opens the doors wide for government-corporate empire builders, like the Project for a New American Century, to recruit Christians to murderously steamroll their agenda across the face of the earth.

The works of war, regardless of the grandiose reasons given for choosing them, are never the works of Christlike love, which are the exclusive means by which God saves the individual and all humanity. And, such love is the power that vanquishes all other power, believe it or not…

As the late Rev. John L. McKenzie succinctly focuses the issue, “The thing about following Jesus is that you don’t do the right thing because it works; you do it because it’s the right thing. If it doesn’t work, nothing works because the wrong thing doesn’t work either. I think we have proven that.” –Emmanuel Charles McCarthy 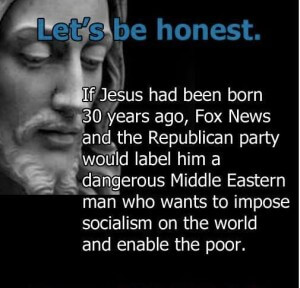 There have always been Christians who spoke out against the corruption of Jesus’ teachings and they have been ignored, reviled, rejected, mocked, persecuted and maligned throughout time.

There have always been Christians who never abandoned his true teachings, such as the Quakers, Mennonites, some Catholics and Protestants who have been faithful witnesses to Jesus by denouncing violence and caring for the poor.

There have also always been Jews, Muslims, agnostics, atheists, anarchists, secularists, rebels and revolutionaries who have lived lives that embody the teachings of Jesus.

Just because I no longer do church, I love and try to follow the teachings of Jesus, so I am connected to the cosmic Body of Christ.

The most rigid of fundamentalist Christians are my sisters and brothers because every Christian is but one cell in the cosmic Body of Christ.

“So in Christ we who are many form one body, and each member belongs to all the others.” -Romans 12:4 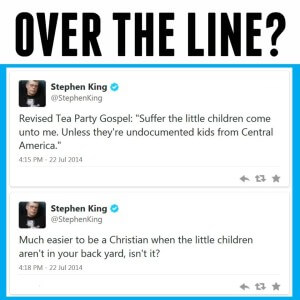 “Its parts should have equal concern for each other. If one part [of The Body] suffers, every part suffers with it.”-1 Corinthians 12:25-26

St. Paul never failed to express his freedom of speech and he warned the followers of Jesus to NOT judge the unbeliever but to provoke the believer onto good works.

The church must be reminded that it is not the master or the servant of the state, but rather the conscience of the state. It must be the guide and the critic of the state, and never its tool. If the church does not recapture its prophetic zeal, it will become an irrelevant social club without moral or spiritual authority.-Martin Luther King, Jr., Strength to Love, 1963.

Since I went online in 2005, my hope and prayer has been to Wake Up Americans to their roots in the land where Jesus taught that it is the peacemakers who are the children of God: NOT those that starve, bomb, torture or occupy others!

The Christian EXODUS from the Holy Land began in 1948 when Israel became a state.

In 1947, 20% of the total population of Palestine Israel was Christian.

Today, Christians represent less than 1.3% of the total population and their Exodus is due to a brutal, inhumane military occupation which denies their human rights as it ignores international law, aided and abetted by the US government and its citizens hard earned tax dollars.