No one has a right to declare that Shiism or Sunnism is false and heretical.

One of the major differences between Shia and Sunni traditions is about the role of leadership. When Prophet Muhammad (pbuh) was returning from his last pilgrimage, he gathered the caravan at an oasis called Ghadir Khumm and delivered a revelation, that as of this day he has delivered the complete guidance from God, the message of Islam is complete now.

That message was and is crystal clear; there is no misunderstanding about it. There is no more advisement from God, and nothing more needed to added to the religion, it’s done. However, the tag part of that message was understood in two different ways. 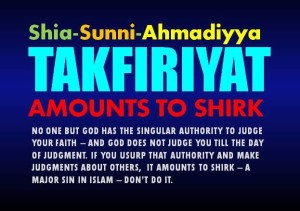 One set of people believed that the Prophet had assigned the role of spiritual leadership to Hazrat Ali and their understanding of the last sermon of the prophet was that, he was leaving behind the Quran and his family for future guidance.

Whereas, others believed that, all they have to do now is to stick with the Quran as Prophet had called for in his last sermon, and they do not have a record of Prophet’s call for the Ummah to follow his family for guidance or assigning the responsibility of leadership to Hazrat Ali.

The first group eventually became Shia and the other Sunni, and both have built up their arguments in “faith” and have concreted the differences.

If the Shia community feels they need guidance from a learned Imam, that is their choice, and the same goes for the Ahmadiyya Muslims. The Sunnis feel they don’t need one, and that is their collective choice

What is your (all of us) problem? Are you answerable to anyone’s deeds other than your own on the Day of Judgment? If not, then mind your own faith, instead of calling each other name and denigrating the other, focus on being a good human being.

IS THERE A NEED TO RECONCILE?

Is there a need to reconcile the differences? Not at all, there is no need to resolve nor will it be resolved, this was all natural and predicted. It is human nature to divide themselves on ideas, religion, politics, cultures and nations. Shia, Sunni and Ahmadiyya division is natural, and there is no need to compel any one to believe otherwise. Islam forbids compulsion (2:256) against one’s will without ifs and buts, and I hope all of us got that message right.

What we need to do is learn to agree to disagree, and respect the otherness of others as God has instructed in Surat Kafirun. In this Surat, Qur’an addresses the believers (of other faiths) in the most dignified way, putting every one on par without denigrating any. It is an exceptional example of civil conduct for one to follow. No where in this chapter a claim is made that the faith of Muslims is superior to others, or others’ faith to be inferior.

Kafirun is an exemplary Surat teaching civil dialogue, throughout the Surat, the other is treated respectfully and as an equal, “I do not worship what you worship, and you do not worship what I worship” – it does not say your worship is inferior to mine. The element of arrogance was not given a room in this chapter. Because you hold a different belief, you do not belittle the other’s belief.

This chapter is about consciously nurturing civility in societies. It is not about overlooking the differences and focusing on commonalities, but simply guides us in accepting the otherness of other. You are who you are and I am who I am and let’s figure out how we can co-exist with the least tensions. This is the basis of pluralism – i.e., respecting the otherness of others. I will be delighted to quote many examples of the prophet where he practices this principle.

The other verses that call to respect the otherness of others are in Surat Rahman (55:7-11). He has created a well integrated and diverse interconnected world to function in harmony, and expects us to sustain and manage it. We have the responsibility to work towards it, as we are called the manager (Khalifa) of our surroundings. Did we lose the leadership role assigned to us? Do we want to force others or figure out working together to create peace, the Hudaibiya treaty stands as a testament and example for us to follow.

We are all one family, and each one of us is a progeny of Adam and eve, and God has made us into different tribes, communities, nations, (and faiths, as God acknowledges other faiths throughout the Quran and does not condemn any one, but assure them that if they are good to fellow beings, their reward is with him) races and other uniqueness (49:13), which prophet reaffirmed in his last sermon; i.e, not to discriminate any one based on any one of those criteria.

Each one of us is unique with his or her own thumbprint, taste buds, eye print and DNA. Had he willed he would have created all of us exactly alike in a factory like precision, but he chose to make, each one of us to be unique. That is his deliberate choice, isn’t it? Did he make a mistake? Shall we respect his will?

When we are so different, conflicts are bound to arise, and he offers further guidance – the best ones among you are those who learn about each other, and if we do, myths fall by the wayside, and understandings develop. Knowledge leads to understanding and understanding to acceptance and appreciation of each other’s uniqueness.

Islam is about human nature, and it is also known as a religion of fitra. Prophet (pbuh) had envisioned that we will divide ourselves into many (72/73 is a metaphoric number) tribes. We all must compete in doing good to fellow humans, and one among us will score high in good deeds (taking care of fellow humans – all humans regardless of their race, religion or region) while others will pass, one or two may fail. (College examples).

Prophet assigned you and me to read and understand the Quran, and he knew that we all will have a different understanding of it based on our own experiences.

No one has a right to declare other’s tradition as false or heretical. That is the Job of Allah, not yours. If you do that, you are assuming to be his deputy, an associate of God, or a partner of God and that is not acceptable to any Muslim other than men like you. Unless you have an appointment letter from Allah, your declaration is not acceptable.

If you are declaring fellow Muslim to be a non Muslim, then you are committing Shirk, and your word has no value to us in the society, however, that is between you and God for committing the fraud of representing him..

As a society, we can punish your for the violations of civil rights, robbing, raping, thieving, molesting, abusing family members, employees, breaking contracts with fellow beings, massacring, killing and other civic violations… but we cannot punish you, and no one has the right to punish you for what you believe, that is between you and God. You are a Muslim if you believe in God and Prophet Muhammad (pbuh) and claim yourselves to be a Muslim.

At World Muslim Congress, our Mission is to build cohesive Societies, where no human has to experience tension or discomfort, or live in fear of, a fellow human. Mike Ghouse

On the campaign trail in Turkey Abdennour Toumi

Illinois Governor Rauner can do the right thing American Arabs

Comments (3) on “Shia and Sunni Takfiriyat”