The antithesis of fundamentalism is curiosity, which when explored always enlarges ones point of view beyond what one thought they already knew!

Being curious as to WHY Christians voted for Donald Trump, I learned:

I could sense going across the country that God was going to do something this year. And I believe that at this election, God showed up.

Graham see’s Trump as an answer to his prayers.

It has often been said that you had better be careful what you pray for, because you just might get it!

God indeed works in mysterious ways and my conscience calls to engage in the spiritual battle being played out in the political realm by researching and writing about it!

Excerpted from A Psychological Analysis of Fundamentalism:

“Fundamentalist” is a term sometimes used to refer to anyone who is intolerant of other’s beliefs. Fundamentalism is “not so much an ideology as it is an attitude, an attitude of intolerance, incivility and narrowness,” says Walter Shurden, professor of Christianity and director of the Center for Baptist Studies at Mercer University.

“It is an attitude that says, ‘We have the truth, the whole truth and nothing but the truth, and we are going to impose it on you and control the system so that you will have to knuckle under to it.'” [1] 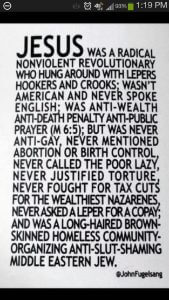 The rise of Fundamentalist Evangelical Christian Nationalism grew rapidly during the George W. Bush administration because he was ‘one of them.’

In 2016, Fundamentalist Evangelical Christian Nationalists twisted Obama’s “Yes We Can” to tell Trump: “Yes YOU Will” be their warrior to lead their ‘holy crusade’ against their antichrists of abortion, gay-marriage and Islam.

Fundamentalist Evangelical Christian Nationalists view Trump as an instrument of God, and they know but do not care that he is not a holy man.

Christians read in 1 John 4:8: “Whoever does not love does not know God, because God is love.”

“But love is not a victory march! It’s a cold and it’s a very broken hallelujah” [-Leonard Cohen, poet-musician born in 1934 and died on Election Eve 2016]

The early followers and lovers of Jesus were called members of THE WAY-being THE WAY he taught one should be;

Nonviolent, a Peacemaker and one who did God’s will and “What does God require? He has told you o’man! Be just, be merciful, and walk humbly with your Lord.” -Micah 6:8

What got Jesus crucified was disturbing the status quo of the Roman Occupying Forces, by teaching the subversive concept that God preferred the humble sinner, the poor, diseased, outcasts, widows, orphans, refugees and prisoners all living under Military Occupation above the elite and arrogant.

The bumper sticker actually did get it right: “We are spiritual beings having a human experience.”

According to the 1987 classic, The Different Drum: Community Making and Peace, Dr. Scott Peck defines the spiritual life as fluid and so one may pass back and forth repeatedly through any of the four-probably more-stages of the soul.

Stage one upon this journey is essentially our infancy in the spiritual life. Like a wild child, a person in this stage reflects the inner chaotic and anti-social, unregenerate soul that is interested only in its own self-satisfaction and ego, much like the stereotypical spoiled child.

Stage two souls seek to “let their light shine” and will live virtuous lives and do many good works. They also can be judgmental of others, self-righteous, rigid of thought, cold of heart, legalistic concrete literal thinkers and may even be guilty of a lukewarm faith. They want to do right and they even may desire to love and please God, but have not yet fully opened up to the Inner Light, as Joan of Arc did when she challenged church and state and persisted that she had intuited God within -even while being fried.

Stage two souls have not yet been set fully free and prefer the security of a higher human authority than themselves for guidance. They submit to elected officials, institutions, scripture, dogma, ritual, ministers, gurus and politicians!

The difference between a stage one and stage two soul, is that a stage one would NOT even notice a neighbor in need, while a stage two intuits that we to be our ‘brother’s keeper’ and might even respond like a good Samaritan who see’s and then offers care to a total stranger in need.

Stage three souls have not just awoken, they have evolved!

This evolution has led them to the realization of what Jesus was really talking about in the Sermon on the Mount AKA: The Beatitudes which sound like crazy promises, but are all about waking people up to The Divine within themselves and all others!

In other words: it is those who know their own spiritual poverty, their own limitations and sins honestly and trust God loves them in spite of themselves who already live in the Kingdom of God.

God’s name in ancient Aramaic is Abba which means Daddy as much as Mommy and He/She: The Lord has said, “My ways are not your ways. My thoughts are not yours.” -Isaiah 55:8

“Blessed are the meek, for they shall inherit the earth.”
The essence of meek is to be patient with ignorance, slow to anger and never hold a grudge. In other words: how comforted you will be when you also know humility; when you know yourself, the good and the bad, for both cut through every human heart.

“For with the measure you measure against another, it will be measured back to you”, Jesus warns his disciples as he explains the law of karma in Luke 6:27-38.

And what a wonderful world it would be when we all seek peace by pursuing justice; for there can be none without the other…[2]

A stage three soul may reject Jesus as God, but they often agree with the philosophy of Jesus, which Thomas Jefferson laid out when he weeded out the miracle stories from the gospels and clarified the teachings and ethics of Christ in: THE LIFE AND MORALS of JESUS of NAZARETH

A stage three soul will see that a neighbor is everyone on the planet and not just those who think and look the same and are born in the same geographical location. Stage three’s are seekers, doubters, skeptics, agnostics and frequently adults who grew up disenchanted with institutionalized religion. Their inherent intellectual curiosity leads them to seek their own way towards the Mystery of the Divine through philosophy and the study of multiple faith paths choosing and discarding according to their “inner light.”

Trump’s triumph overflows with opportunities for we the people to be the instruments for the change we want to see.

Godspeed on we the people to pray like Francis of Assisi:

Lord, make me an instrument of your peace:

Where there is hatred, let me sow love;

Where there is injury, pardon;

Where there is doubt, faith;

Where there is despair, hope;

Where there is darkness, light;

Where there is sadness, joy.

O divine Master, grant that I may not so much seek

To be consoled as to console,

To be understood as to understand…