On Saturday this author reporter discovered Twitter had censored weeks of my Tweets with the hashtags: USS LIBERTY and Vanunu by inserting “Tweet Unavailable” at the retweets.

ALL the Tweets remained available at my Twitter Wall HERE

BUT weeks of Tweets had disappeared at the hashtag wall for USS Liberty which I discovered the day after Veterans Day; ONLY because I did NOT log into my Twitter account to do a Twitter search for #USSLiberty.

For weeks, I had been tweeting at Donald Trump on a daily basis regarding the USS Liberty striving to end the USA Government Cover-Up of Israel’s 8 June 1967 attack on America’s then premier SPY-Ship as she navigated in international waters during the Six Day War.

On that day in infamy, Israel killed 34 Navy and Marine servicemen and wounded 174 more who were ordered by the LBJ administration to SHUT UP about their experiences under threat of “court martial or worse.”

By scrolling down the #USSLiberty Wall, I discovered my daily Tweets over the last few weeks were all missing in action!

ONLY because a few others had re-tweeted me, did I learn that my original “tweet is unavailable” meaning CENSORED!

I then searched Twitter for #Vanunu and learned that none of my Tweets regarding Israel’s nuclear whistle blower’s human rights struggle for freedom from Israel appeared on the wall, other than being noted as “UNAVAILABLE” at a Retweet!

Twitter also said they would only censor tweets if they received a valid request from an “authorized entity” and that they would notify the tweet’s author after their tweet was removed.

This American reporter’s weeks of Tweets’ were made “UNAVAILABLE” without any notification from Twitter;

So this article serves as a public notification of censorship of the press and is published as a public service in honor of ALL Veterans especially the USS Liberty veterans and also to remind the world of USA collusion in Israel’s Nuclear Deceptions and Mordechai Vanunu’s human rights struggle.

Two of this author reporters Tweets that TWITTER made “UNAVAILABLE” as in CENSORED after they were Retweeted: 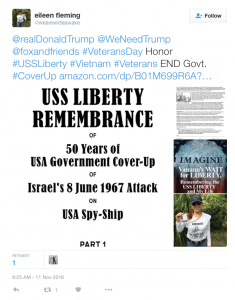 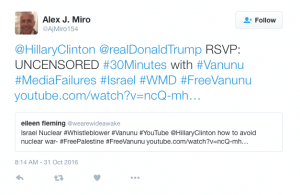 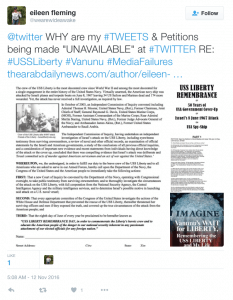