Immediately after reading the transcript of Mr. Trump’s Ukraine phone call and the whistleblower’s statement this concerned citizen contacted my Florida Congressional representatives seeking they support we the people. 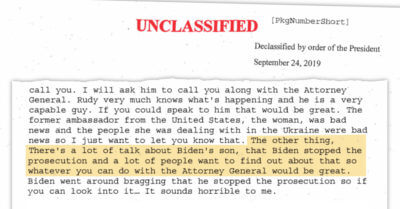 I am disappointed that Mr Trump’s attempts to rewrite the norms of presidential behavior in claiming the right to directly seek the assistance of foreign governments in pursuit of debunked conspiracy theories and blocking congressional oversight by prohibiting administration officials from testifying about their official activities [even in private] is not even on your radar screen!
This patriotic American who registered as an independent in 1972 [is married to a life long Republican] reminds you of what the Republican President Theodore Roosevelt wrote regarding patriotism:

Patriotism means to stand by the country.

It does not mean to stand by the president or any other public official, save exactly to the degree in which he himself stands by the country.

It is patriotic to support him insofar as he efficiently serves the country.

It is unpatriotic not to oppose him to the exact extent that by inefficiency or otherwise he fails in his duty to stand by the country.

In either event, it is unpatriotic not to tell the truth, whether about the president or anyone else!

This Story Will Continue HERE

Pro-Israel bullying on college campuses is so unAmerican American Arabs