Border(less): refugees face challenges. Today we follow a Kurdish family as they flee their home and navigate Europe’s elusive borders.

How do you lose a family member in Europe’s elusive borders? And as a refugee how do you navigate the world of smugglers when crossing the English Channel? At a time when nations are sealing off their borders, we explore the nuances of migration, border ambiguity and smuggling in this episode of Kerning Cultures. 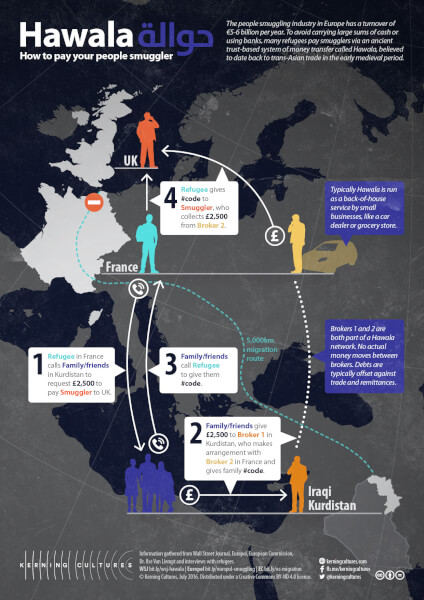 Where is Dunkirk? What is the history of this town?

Dunkirk is a small city in northern France that rests about 10 kilometers away from the Belgian border. According to the 2012 census, Dunkirk boasts a population of nearly 91,000 inhabitants. Originally a fishing village in the Middle Ages, this small city has undergone several territorial disputes and was briefly in the hands of Spain, the Netherlands, and England, before finally becoming official French territory.

How did a refugee camp evolve in Grande Synthe?

Grande Synthe has recently been considered France’s first internationally recognized refugee camp. Located in the suburbs of Dunkirk, the Grande-Synthe camp currently caters to a consistently fluctuating group of around 2,500 refugees. Local mayor, Damien Careme, along with several groups of volunteers, called for the construction of this new camp after witnessing the atrocious living conditions of migrants in the suburbs of Dunkirk, and of course, Calais.

How many refugees are in Northern France at the moment?

Although no accurate numbers can be provided as to the amount of refugees in Northern France, Grande Synthe alone used to houses 2,500 refugees. Along with an estimated 6,000 in Calais, many others in unrecognized refugee camps, and hundreds of reports of captured migrants, that number may well be in the high thousands.

Why aren’t some refugees seeking asylum in France?

Many refugees do attempt to seek asylum in France. However, the overwhelming majority are unable to do so due to a complicated and rather risky French policy on asylum. Many refugees are simply not provided with the information needed to apply. Some do not possess all the documentation they need in order to formally lodge an application, and many others do not see France as their final destination due to reasons such as the
inability to work legally as a refugee, heightened policy, or separation from
family.

Why are refugees setting their hopes on the United Kingdom?
Compared to France, current UK policies on asylum are much more lenient. Migrants may apply to seek asylum immediately upon arrival. They are provided with work permits 6 months after their arrival and are often able to find work without documentation in the meantime. Furthermore, in the UK there is a lack of continental institution, meaning that local authorities are prohibited from requesting identity papers unless there is a suspected criminal offense. In France however, asylum seekers do not have a right to work and without identity papers, they must live in a constant fear of being detained.

Why do they have to resort to smuggling methods to get to their destinations?

Refugees must resort to smuggling because they see no other viable ways of escape. In order to formally be considered refugees and thus apply for refugee status, they must be located in a country different from that which they are escaping. Smugglers then exploit the lack of legal opportunities provided to those facing persecution and profit greatly from
their vulnerability.

How big is the human smuggling industry?

The human smuggling industry is huge, and extremely profitable. The two principal smuggling routes- leading from East, North, and West Africa to Europe and from South American to North America- generate about $6.75 billion a year. And globally, this figure is likely to be much higher. The fees charged to smuggle migrants differ based on aspects such as distance and point of origin. However, the average price paid for a single
trip may be anywhere from $2,000 to $10,000.

What is the Hawala system?

The Hawala system is a method used by migrants and smugglers that ensures an informal contract between both parties. Refugees who are attempting to be smuggled into Europe do not actually pay the smugglers themselves in cash. Instead, their transaction is handled in their country of origin by a third party (like a family member or friend) who pays the money to a smuggling office that then provides them with a code to give the refugee. The
refugee then gives this code to the smuggler which is linked to a payment and a specific trip. This is done in order to leave the money untraced and to avoid the dangers of carrying large sums of cash while traveling.

How does “brexit” affect refugees in the North of France that are hoping to reach the UK?

Brexit may mean tighter immigration policies in the UK in a conservative effort to “take back  control” of its borders. The Brexit campaign has effectively worked to stir up anti-immigrant  sentiments in the UK and Europe generally, making it even more difficult for refugees to move freely. Furthermore, a UK restriction on migrant movement could trigger changes to border controls in Northern France that may ultimately hold back refugees in places like Calais and Grande Synthe.

How can I help?

There are a number of organizations working in and around the Dunkirk area. If you’d like to donate or volunteer your time, you can reach out to: Hafsa’s donation page or Utopia56. Hafsa is also currently setting up a charity called One Drop Care that helps refugees with more practical support and skills once they arrive in the United Kingdom.

President Trump is the catalyst the Arabs need to force them to act Arab News
Remember the USS Liberty’s MD in honor of National Dr. Day 2014 American Arabs
Christian Baptists raise funds for needy in Iraq and Gaza Bloggers