For Arabs, making food is part of family life, the bond that brings everyone together. It isn’t just about eating, but about memories of growing up in a beautiful family. One of my favorite and most popular Arab meals is stuffed grape leaves, which is diced lamb mixed with spiced rice wrapped in freshly picked grape leaves and cooked over a stewing pot of lamb or also mixed with ox tail. Stuffed Grape leaves, or in Arabic, wariq duwally.

Arab culture has many great food recipes, but one of my absolute favorites is stuffed grape leaves.

Stuffed Grape Leaves are grapevine leaves stuffed with a mix of diced and spiced lamb meat and rice.

The best grape leaves are the ones you make yourself. Many places that make them don’t do a very good job. The rice is often mushy and bloated and instead of using lamb, many places save money using hamburger meat.

I grew up watching my mother make grape leaves several times each week, especially on the weekend. She would be in the kitchen listening to ala del ouna Arabian themed music, or the songs of Fareed al-Atrash. She would often sing the words along with the music in Arabic as it played out on our mahogany Zenith stereophonic record player console credenza in the 1960s

The recipe she followed was really simple, but it took several hours to do it right.

The first ingredient, obviously are the grape leaves. Back in the 1960s, you couldn’t just go to the grocery store and buy grape leaves like you can today. You had to pick them yourself. So, as we drove around doing whatever — shopping or visiting relatives, or going wherever — my mom would see a grapevine on public property and she would tell my dad to stop the car.

She kept plastic bags in the trunk of the car and she would have all of us pick each grape leaf off of the grapevine one at a time and stack them neatly on top of each other in a plastic bag. We would quickly fill 10 bags, and then take off. Back then, there were lots of places where you could find wild grapevines growing in and along the side of the road in forrest preserves and parks. We have a grapevine trellis growing in our yard but mom made so many grape leave meals that one large vine was not enough.

Mom would put some of the plastic bags of grape leaves in the freezer section of our refrigerator, which in the 1950s was an ingenuity in and of itself back then.

Before the fridge, we used to have a wooden ice box with a ceramic tub where the “iceman” every few days would drop off a large block of ice. The iceman would walk up and down the streets pushing his ice cart as the water slowly dripped from the sides and yell “Ice here! Ice Here,” ringing bells or singing a familiar repetitive tune.

The ice only cost a few pennies. So it was hard to save the grape leaves back then. But once the refrigerator came along, we enjoyed every meal almost every day with stuffed grape leaves on the dinner table.

Once mom had the fresh grape leaves, she would start making the recipe in her kitchen.

Mom would pull out a large, deep steel cooking pot and fill it with some water. Then she would pour in the extra virgin olive oil, and pepper with with all kinds of spices. Then, she would put in the meat. Ox Tail was a favorite, but it had to be boiled at least three hours before it could be eaten. Or, she would put in lamb shoulder chunks.

Mom had a metal grinder that attached to the edge of her counter and she would take lamb meat and grind it like hamburger. She would spice it and then set it aside. She’d have a large bowl of rice and rinse it over and over again to get rid of the starch. I didn’t know what starch was but she showed me how the water in the bowls gotten clearer and clear after each rinse of the rice.

She would put spices in the rice, add olive oil and then mix in the ground lamb. Garlic. Finely diced tomatoes.

And that’s when the hard work would begin. It was back breaking because you would stand then and repetitively roll and fold each grape leaf. 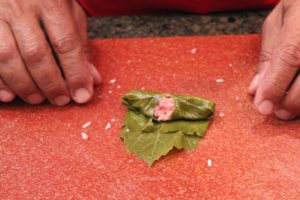 The pot of meat would boil slowly for about two hours to make the eat tender as mom wrapped the leaves.

She would begin by placing one grape leaf at a time on the table, course side up (shiny side down). She would snip off the remainder of the stem, and then place a clump of lamb and rice along the stem end of the leaf. She would start rolling the leaf, and then fold in both sides like a Christmas present. And then roll some more. until it formed a tight cigar shape.

She did that over and over again until all of the diced and spiced lamb and rice mix was gone. It would take more than an hour to “lif the wariq,” the Arabian phrase for “roll the grape leaves.” After about an hour of standing their rolling leaves, she would have a big pile of stuffed grape leaves ready to cook.

The boiling pot, which also had freshly diced tomatoes, spread the succulent aroma throughout the house even before the rolled grape leaves were placed in the pot. There is no way to forget that aroma. It was so delicious. 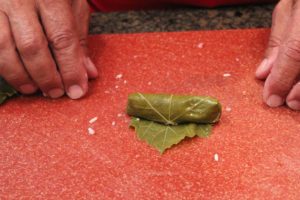 In the boiling pot, the water level was slightly over the meat. She showed me how she would lay a blanket of unused grape leaves over the meat and steaming broth covering everything, and then carefully place each wrapped grape leaf, one by one, on top and evenly throughout.

And then she would cover the pot and let it cook on low flame for another 30 more minutes.

A large pot of grape leaves would make enough for 20 people. She would roll 200 to 300 grape leaves, which would be the equivalent of maybe 4 single jars of grape leaves that you can purchase today at any store that offers ethnic food items. The most popular is Ziyad Grape Leaves which are the best because of their fortitude.

Freshly picked grape leaves are always the best to use. They are strong and protect the rice and meat as they steam hot inside. Keeping the stuffed grape leaves at the “water line” and above ensured that the rice would not get overcooked and become mushy. You have seen those at little bakeries that employee non-Arabs to cook their food. They churn out a lot of stuffed grape leaves, but they are only OK. Not great.

When you do them yourself, you want each little piece of rice to be tasted individually when you eat the grape leaf. Not mushy.

Food is the foundation of family life in the Arab community. The dinner table is the foundation of the family. Everyone would get together, relax, set aside their anger and their problems and enjoy the company of their parents, siblings, children and even visitors as they prepared to eat.

Dad tried to keep the focus away from the terrible news that would come in from the Arab world, or the constant wars with Israel and the news about the suffering of the Palestinian refugees. My dad was from the Holy City of Jerusalem and my mother was from the Holy City of Bethlehem. She attended the church of the Nativity and lived near by. Relatives run the Nativity Church until this day.

Sometimes, mom would make the grape leaves and we would take them with to eat when we would go to the drive-in movie theater where we watched our favorite actor, John Wayne — John Wayne never killed Arabs like the other actors. The 1959 film “Rio Bravo” was one movie I remember watching with the steaming pot of grape leaves wrapped in a large towel to keep it hot, and placed on a small table next to our car in the drive-in movie theater.

We would be eating and enjoying the movie and people would walk by and ask what that great smelling food was. Mom always had small paper plates and gave them a taste and told them, this is “Arabian Wariq duwally.”

They say serving a plate of mansaf (cooked rice on a bed of pita bread soaked in Jameed and topped with freshly cooked lamb is a meal fit for a king. But a large pot of properly cooked stuffed grape leaves is the a meal to fit a family gathering. Love. Companionship. Truth.

Sahtein everyone. Enjoy it.

Here are some links to videos of me making grape leaves, with my son Aaron. You can find a lot of them on TikTok under my handle rayhanania.

and one from TikTok
visit www.Hanania.com to get more information on Ray Hanania’s writings, and recipes, and his political columns and books.

Four reasons why you need Zahtar in your life American Arabs

Syrian refugees must re-register between Sept. 23 and Nov. 22 to keep status Civil Rights