The small to me 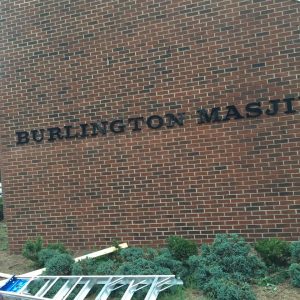 dium sized town of Burlington, NC is a stronghold of Christian conservatives with over 20 churches. It is also the home of the Burlington Masjid, which opened its doors in February 2016. Formerly the Life’s Journey Church of Christ, the Masjid now represents a community of over 150 families.

The Church had planned to move to a larger location for over a decade and as reported by the thetimesnews.com, Rev. Phil Hardy and Shahar Sayed, a leader of the community, took immense pride in building bridges through interfaith partnership. The community also owns and operates the Al-Asqa Community Clinic in nearby Greensboro that is staffed by volunteer doctors, nurses and students.

We have to admire the strength and determination of a Muslim community willing to shoulder the enormous risk of “going public” in the Bible Belt. As a former resident of the town, I was proud to have a place to worship but also very aware that acceptance of the Masjid was far from universal.

The Mayor of Burlington, Ian Baltutis deserves a lot of credit. He did more than greet the community with politically correct lip service during the Masjid’s opening ceremony. He walked through the front door on numerous occasions, attended Iftar, and maintains friendly relations with community members. Mayor Baltutis made the conscious choice of risking his popularity with some elements of his constituency by defying the natural order of lingering ignorance and outright racism. The South needs more politicians like him.

I never heard and doubt there has been a single khutba (Friday sermon) that addressed the problem of living in the midst of intolerance with a hint of resentment. The community’s unwavering commitment to doing good deeds, open door policy to people of all faiths and taking the high road is remarkable and righteous.

When faced with bigotry or ignorance, it was great to be able to say, “If you want to know the truth about Islam, come see it for yourself.” No one ever accompanied me but I’m sure other invitees have and hope the rest will eventually change their minds.

Many are familiar with the horrifying event that took place in Chapel Hill, NC when Craig Steven Hicks shot and killed 3 Arab students. In its wake, there was wonderful and compassionate expression of support from the entire Arab and Muslim community well as many other groups and organizations in the US.

30 miles down the road, a good number of religious leaders and academics, well aware of the potential backlash of the Burlington Masjid’s creation, sought to pre-empt acts of violence through a joint statement. Public threats against the Masjid have been marginal at best but the language is out there in cyberspace and as usual, some events probably remain unreported.

I invite you to visit their Facebook Page. What you do next is entirely up to you.

Trump’s war on the mainstream news media should be our war, too American Arabs