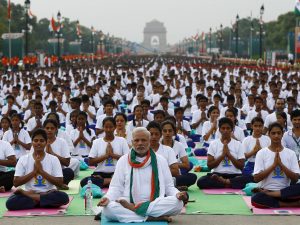 In his address Modi said:

We did not have health insurance in olden times. But Yoga is a practice, which gives health ‘assurance’ with zero spending.

Countries with poor health budgets should invest in yoga for preventive health measures and they can save a lot of money. It has become essential that everyone says ‘yes’ to yoga. We cannot wait any longer. Embrace yoga and make it a part of your life.

We are disconnected from ourselves in today’s times. Therefore, Yoga helps us in reconnecting with ourselves.
The way mobile phone has become a part of life; you can make Yoga a part of your life too.

From Qatar Al Jazeera spoke with Noor, who converted to Islam 17 years ago and teaches yoga to women-only classes.

Yoga and Islam are both very spiritual, the roots are the same, they both come from an oral tradition, through a chain of masters teaching their students how to reach God…

Yoga can help people practice their Islamic faith in a more mindful and peaceful way. Yoga is not a religion. It is a discipline.

Prime Minister Modi encouraged atheists to practice yoga and he also announced two awards for next years Yoga Day celebrations. One award will go to those who are doing good work in the field of Yoga on the international level and the other on the national level.

In the running must be the ShiftNetwork’s YOGA Day SUMMIT!

On Yoga Day, this reporter was one of over 26,000 online participants from 147 countries who learned about yoga’s “ancient roots to modern transformation” on live stream recordings that are now available for free here.

Three years ago instead of undergoing bilateral total knee replacements for bone on bone grinding due to the destruction of cartilage in my knees, I changed my ways and began to learn the practice of yoga.

My knees don’t bother me any more and one of my favorite yoga practices is yoga nidra, which has also become the last thing I do every night!

Yoga Nidra is a traditional yoga practice of guided meditation that promotes deep relaxation, which can lead to a literal transformation in the brain!

A study by Hans C. Lou et al in 1999 concluded that Yoga Nidra quiets the prefrontal region of the brain and arouses the posterior visual system – comparable to REM sleep.

In the 1970s, scientists began measuring brain waves of yogis and others with a consistent practice of meditation.

Studies consistently proved their brains slowed from beta to alpha within minutes even in the midst of distraction and noise.

Brain wave patterns that oscillate at a high frequency between 13-36 oscillations per second are called beta brain waves. This pattern shows up when the human mind is busy analyzing information, is stressed or multi-tasks.

Alpha wave patterns appear when the mind is relaxed yet alert and oscillations pulse at approximately 6-13 oscillations per second.

When brain waves slow down to the alpha state and theta wave patterns; the brain’s hyper-rational “executive decision-maker” network is quieted and other parts of the brain associated with unconscious are aroused increasing insight and creativity—two qualities Leaders of the World would do well to cultivate!

ENJOY this Experience of Yoga Nidra with Shiva Rea

Celebrating the Baptism of Christ on the Jordan River Arab World