Seth Morrison of Jewish Voice for Peace talks about the challenges facing the movement to bring peace to Palestine and Israel through compromise during an interview Friday, Oct. 10, 2014 on Talk of the Town Radio on WCEV 1450 AM radio and www.YahalaVoice.com.

Morrison explains that while many JVP members support the BDS movement, their support is limited to the occupation and products and firms connected to the occupation and does not include Israel proper. He also discusses extremism he has faced in the American Jewish community that targeted him and other American Jews when he embraced the BDS movement (Boycott, Divest, Sanction) protesting against the illegal Israeli settlements.

Morrison is interviewed by Ray Hanania, the managing editor of The Arab Daily News online news site and the author of several books including his most recent “PoweR PR: Ethnic Activist’s Guide to Strategic Communications & challenging the biased Mainstream Media. The book offers “Strategies to overcome bias in the mainstream news media and correct inaccurate perceptions in Western and American societies; for those excluded by the Biased Mainstream News Media, the “Minority Minorities.” PoweR PR is available in Print format for $29.95 and eBook format for $24.95.

Information about JVP is available online on their website at www.JewishVoiceforPeace.org.

Talk of the Town Radio, hosted each Friday at 4 PM CST by Ray Hanania is archived in podcast format at The Arab Daily News podcast website and is available on iTunes for free download.

Seth Morrison has held leadership posts in various local, regional and national Jewish organizations starting in college as a youth leader in Young Judea. He is currently active in Jewish Voice for Peace serving on the Congressional Outreach Committee.

In 2011 Mr. Morrison resigned from the Washington DC Board of the Jewish National Fund in protest over repeated evictions of Palestinians from their homes in East Jerusalem. He chaired the Washington DC Metro Chapter of J Street in 2013 before becoming active in the BDS Movement. His op-eds supporting Palestinian and Bedouin rights have been published in The Forward, The Jerusalem Post and +972 Magazine. 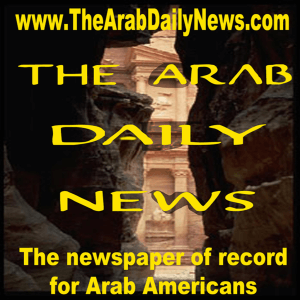 Mr. Morrison is also active in LGBTQ organizations and local politics in Northern Virginia. Professionally he is a consultant specializing in marketing and strategic planning for both for and non-profit organizations. Previously he was the SVP & General Manager of CTAM, a trade association serving the cable television industry. As a marketer, he has been responsible for major local and national marketing, PR and social media campaigns for the cable television industry and non-profit organizations.

Morrison will be among speakers on a panel hosted by the Holy Land Ecumenical Foundation on Saturday at the Washington DC Marriott Hotel at 3:30 pm entitled “Giving Palestinian-Israeli Peace a Chance.”

Recently renewed U.S. diplomatic effort to resolve the Palestinian-Israeli conflict had reached an impasse before another conflict erupted between Israel and Gaza  in July. It is clear that past approaches are ineffective.  This session will examine what must happen on the ground in Israel and Palestine and what policies US  constituents should be advocating for in order for peace negotiations to resume and succeed.

For information on the Holy Land Ecumenical Foundation visit www.HCEF.org.

To listen to the Podcast on this webpage, use the podcast player below. Or, visit http://RayHanania.podbean.com

The State of American Souls, Must See TV and Trumpism Bloggers