On Saturday Vanunu tweeted: “Here I am waiting out side the educational Bookshop in Salah Adin St. East Jerusalem…

Mordechai is his first name but most call him by his last: Vanunu. On Saturday Israel’s infamous nuclear whistle blower tweeted:

31 years ago this month, this story started,giving all my inf’ and photos about Dimona israel nuclear secrete center.1986-2017.!…now after 31 yeasr the israel security people claiming I still have more secrets, who can believe such stupid spies idea,there is no more any secrets,all the world now know very well all israel Atomic weapons secrets.they are cheating their own people and their own judges,But I survive all this 31 years cruelty.and will survive until they will let me leave,to start my life, far away from israel. Here I am waiting out side the educational Bookshop in Salah Adin St’ ,East Jerusalem.Freedom must come.End this case now !1986-2017.! 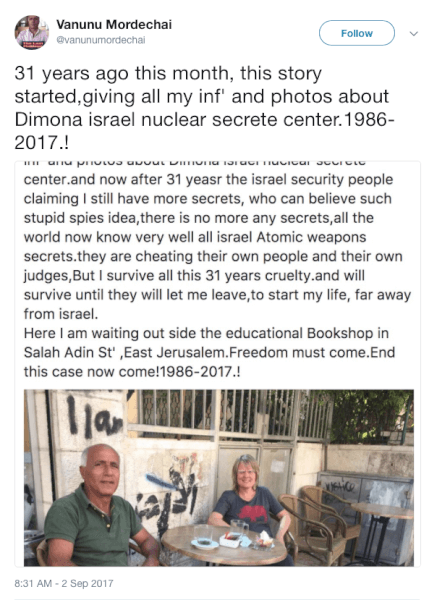 The following is a copy and paste of a Google Translate of an August 30th Norwegian article which begins with a video clip from Norwegian TV 2 titled:

When the couple applied for family reunification via the Norwegian Embassy in Tel Aviv on October 15, 2015, they stated that the treatment time was four months. Today it’s down for three months.

However, the Immigration Directorate (UDI) has still not responded to the application.

“I never thought it would take so long,” said one reported Kristin Joachimsen to TV 2.

UDI has also not informed why the couple can not answer the application for family reunification or when a decision can be expected.

“Here all aspects of good governance are broken, and the immigration authorities have operated in violation of all basic administrative law,” says Arild Humlen, lawyer.=

The married couple initially did not want media attention about the application, and Joachimsen did not share anything with the press. But after repeated attempts to receive a reply from the UDI, Joachmsen has asked lawyer Arild Humlen for assistance and breaks the silence.

“I have contacted UDI many times myself during the two years that have passed, and have not received an answer, so I naturally start to be impatient,” says Joachimsen to TV 2.

– Do you have any hopes that you will finally receive a reply after you contact a lawyer?

“Yes, we must get a response sooner or later, and preferably before,” she says.

“Will love to live together in Norway,” says Joachimsen.

The 48-year-old tells her that she met Mordechai Vanunu by chance at a bookstore in Jerusalem in 2007. The man she fell for and later married with revealed in 1986 Israel’s most guarded secret; Dimona nuclear plant.

It would be quite extraordinary if an executive agency entirely on its own so obviously violates the Public Administration Act
The images Vanunu smuggled out and got the pressure in the British Sunday Times, convinced the world that Israel had acquired nuclear weapons. Vanunu was sentenced to 18 years in prison for betrayal and espionage against Israel, and spent eleven years in isolation.

He was released in 2004 on strict terms of not leaving Israel, or talking to foreigners without permission. Atomic opponents hailed Christian husbands as peace activist, alerts and wholly when he was released.

Joachimsen is a bible researcher, and was appointed professor at the Faculty of Theology of Oslo just prior to marrying in 2015 and fulfilling the condition that she can support her spouse in Norway.

“The tragic side of this is that all conditions for family reunification are fulfilled. The only way immigration authorities can avoid granting a permit in this case is to refrain from processing the application, “said Humlen.

Confirm that the case is with Listhaug

UDI has also given no grounds to the lawyer Humlen on why the matter is so far out of time. He believes the only explanation is that the Ministry of Justice has instructed the UDI to refrain from handling the case,

“It would be quite extraordinary if a governing body entirely on its own so obviously violates the Public Administration Act, so I would think there is an instruction from the Ministry of Justice that prevents the UDI from handling the case.

TV 2 has sent a number of questions to UDI about the application, but it does not receive an answer.

– This is a matter that has been submitted to the Ministry of Justice and Emergency Affairs for consideration, so TV2 must approach you, it is called in an email.

Thus, UDI confirms that the case is not being processed by them. This is strongly contrary to information in an email UDI sent Joachimsen in May when she called for answers, pointing out that the man is in a very vulnerable and postponed position.

“We are aware that your husband’s case is over expected processing time and we understand that this is perceived as difficult. We can assure you that the case is still under active treatment, but unfortunately you can not tell us when it will be completed. We will send you the reply as soon as we have processed the application, “it says in the reply.

The Ministry of Justice now confirms to TV 2 that the case is being processed there and not in the UDI. A word button immigration minister Sylvi Listhaug answers the following questions as to why the application is still not processed after two years.

Vanunu applied for political asylum in Norway right after being detained from prison in 2004. The UDI believed that he had applied for asylum, but then the local minister Erna Solberg instructed the UDI to reject the application. The reason was that it is not possible to apply for asylum when in another country.

When Vanunu satisfied the asylum application in 2008, then Minister of Labor and Social Inclusion, Bjarne Håkon Hanssen, declined the application on the same grounds as Solberg.

It has been completely incomprehensible why we never get any answer

But commitment to getting Vanunu to Norway has been strong.

Learn about Vanunu’s childhood, army service, crisis of conscience, crisis of faith, crisis of identity, USA collusion in Israel’s nuclear deceptions and MEDIA FAILURES which have been rectified HERE

Hypocrisy is the real issue in this election American Arabs