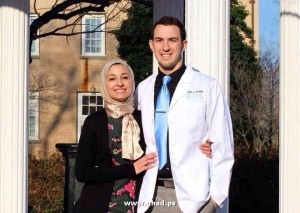 The tragic death of three Muslim American students at the University of North Carolina Chapel Hill is by all accounts one of the most heinous crimes Arabs and Muslims have ever witnessed in decades.

The triple murder of three promising young lives exposes the ugly truth in America that Arabs and Muslims can be picked on, discriminated against, insulted for who they are and as in this case can be murdered in cold blood without raising a national uproar we would have seen if they were not Arabs or Muslims.

This murder comes in a time when America is finally trying to address the historic injustices, murder and institutionalized discrimination against black people. This  as if America  refuses to put this ugly past behind, and instead, blacks  were replaced by Arabs and Muslims as people who must be hated, and discriminated against because of their religious affiliation and the color of their skin

In addition, American news media is treating this coldblooded massacre as regular crime while dedicating more coverage and more TV hours to the murder trial of Chris Kyle the American sniper who is being lionized as romantic hero to feed the latent  American hunger to extract revenge on Arabs and Muslims regardless of who they are and where they are from.

Police quickly identified a suspect in the mass murder as 46 years old being Craig Stephen Hicks .

In America, there is this political and social environment that vilifies Muslims and Arabs by suspecting them of being terrorists, terrorist sympathizers or sleeping cells only because, for the most part, of whom they are collectively as an ethnic and religious group.

Take for example the blockbuster and the most popular movie in America today “ American sniper” which is a movie about an American military sniper, Chris Kyle, who is being glorified  as a romantic hero for killing people Americans love to hate and who happened to be Arabs and Muslims. The larger picture here, however, is not about the legitimacy of his actions, rather about romanticizing and legitimizing the killing of Arabs and Muslims without questioning the morality and the legality of many of his actions during the time he served in Iraq. ” Tyrant” is another Hollywood series that came to fill American homes with anti-Arab hatred and painting all Arabs and Muslims  with broad brush  as evil murderers.

Arabs and Muslims, even before September 11 attacks, are the “evil” Americans love to kill and murder lawfully or unlawfully. This fact, no matter how inconvenient might sound for some Americans; it has become a fact of life on American news networks such as the Fox News that spews hate 24 hours a day particularly against  Muslims.

Another stark example of how a major segment within the American culture that has become so obsessed with hating Arabs and Muslims is the latest statements by the governor of Louisiana Bobby Jindal. Jindal is aspiring to become the president of the United States by way of inciting hatred and anti-Muslim bigotry when he said that Muslims in Europe have no-go zones that others, and he means whites, are afraid to go to.

When he was interviewed on several American mainstream media outlets and asked to clarify his comments, he insisted that he was telling the truth, while no US reporter rigorously challenged his baseless and ridiculous claims. Jindal’s larger message, moreover, is that he can exploits bigotry, hatred of Arabs and Muslims in America as a stepping stone to reach the part of American constituency that agrees with him then amplifies it to send a racist message to the American public. What’s more troubling is that no one outside the Arab and Muslim American circles has really challenged his false assertions. It  should concern all Americans that people like Jindal can say what they said and get away with it  and then seek a national office.

Ali Younes is the Editor of the Arab Daily News. He can be reached at : Aliyounes@theArabdailynews.com