Last Tuesday Israel’s Mossad Chief Yossi Cohen made a rare appearance at a Finance Ministry conference to address ongoing protests in Iran and reassured his audience that Israel “has eyes, ears and even more” in Iran.

ONE woman who had eyes, ears and even more in the White House during The Six Day War was President Lyndon Baines Johnson’s consort: Mathilde Krim.

In 1981, Krim became an AIDS activist soon after the first cases of AIDS were reported.

Cohen also discussed recruiting within the Mossad, and attempts to ensure equal gender representation at all ranks:

“We wondered why only 25% of our commanders were women, even though at entry levels there were 50%. There is no justification for this. We launched a portal showing all available positions and we hold many discussions, including with experts on the subject, to enact a dramatic and important move which will bring about employment diversification for anyone who can serve in leadership roles. The aim is for more women to rise in the ranks.” 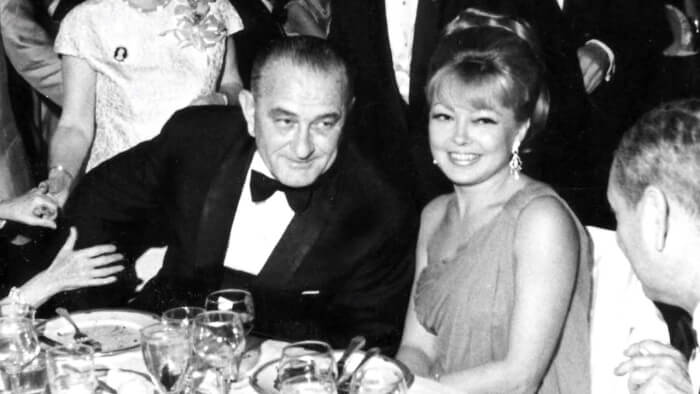 ONE woman who rose in the Israeli ranks during The Six Day War was President Lyndon Baines Johnson’s consort: Mathilde Krim.

In 1981, Mathilde Krim became an AIDS activist soon after the first cases of AIDS were reported. 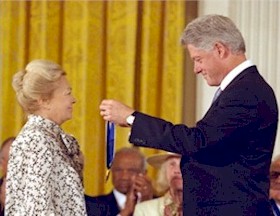 Cheers for the good works out of Krim’s later years but Mossad spies is the reason for this article.

In their later years Donald Pageler a USS LIBERTY survivor of the Six Day War and Captain Robert Kamansky, retired US Army Surgeon and Dentist have devoted years to investigative research of declassified documents, such as the Johnson White House Logs shortly before and during Israel’s June 8 1967 attack on the USS Liberty.

A brief report from Dr. Kamansky follows a brief history regarding Mathilde Krim:

In “GUILT BY ASSOCIATION: How DECEPTION and SELF-DECEIT Took America to WAR” Jeff Gates who served seven years as counsel to the U.S. Committee on Finance, exposed the ‘passionate attachment’ of LBJ and Mathilde Krim, who was twenty years his junior, blonde Italian and a Irgun operative.

The Irgun were the Zionist terrorist network led by Menachem Begin who emerged as Likud Party Prime Minister in 1977. With and without her husband, Mathilde Krim was a frequent guest at the LBJ Ranch having acquired a large Texas estate with heliport next to the Johnson Ranch, as well as the White House.  Johnson was also a frequent guest at the Krim Ranch while Mr. Krim was away or not.

On the night that the Six-Day land grab began, Mathilde was enjoying a sleepover in the Johnson White House. But for that Zionist aggression, would Israel have been able to live peacefully with its neighbors? Israel and its supporters staged an elaborate charade to recast this provocation as defensive. That ruse included the cover-up of an Israeli assault on the U.S.S. Liberty that killed 34 Americans and left 175 wounded and many USS Liberty family lives destroyed.

The White House Logs show that there were 12 messages to Johnson- without a signature- in Mathilde Krim’s handwriting – with a passion pink letterhead – delivered by Walt Rostow National Security Advisor of Committee 303 to Johnson at 6 pm the day before Israel attacked LIBERTY on 8 June 1967.

Mathilde was a Catholic who converted to Judaism when she met Mr. Stern a Bulgarian Jew of the IRGUN and STERN GANG in 1949.

After his death she ‘married’ Mr. Krim, a CEO at United Artists who had a home with a helipad.

He was NOT a delivery boy and why didn’t Krim sign her name on her perfumed pink papered letters to LBJ?

How closely did Walt Rostow know Mathelde?  Were they both MOSSAD?

Mathelde was all over the W.H. logs, as were her eyes and ears in the Lincoln bedroom.

Every letter shows that she wanted Johnson to STOP making neutral comments in any pending war and to COMMITT to supporting Israel.

He did not do this until AFTER the attack.

Mathilde entered the White House many times before and after the attack.

Israel told her to tell Johnson to not send planes to help the Liberty.

And to cover up the truth.  He did just that.

Krim was the wife of a rather insignificant citizen who wielded power over Johnson unlike his own wife.

Now immediately after the USS Liberty attack she told Johnson in his Lincoln bedroom not to use the State Dept. to contact Israel but use her connection to Israel to find out what to do. 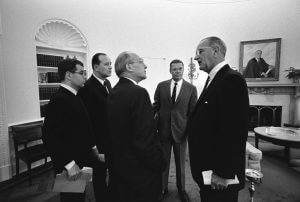 In 1916, Walt Whitman Rostow was born into a Russian Jewish immigrant family in New York City.

He joined the State Department under John F. Kennedy and became Lyndon Johnson’s national security adviser during America’s war on Vietnam, from April 1966 to January 1969.

Rostow was known as a hawk and has been labeled “America’s Rasputin.”

In this photo Walt Rostov is third from the left, speaking to Lyndon Johnson in the Oval Office in 1967.

According to the limited information at Wikipedia regarding Rostow we learn:

Although he supported military and economic assistance to Israel, Rostow believed that increased public alignment between the two states could run counter to US diplomatic and oil interests in the region.

After reviewing the May 1967 report from the Atomic Energy Commission team that had inspected Dimona along with other intelligence, Rostow informed President Johnson that, though the team found no evidence of a nuclear weapons program, “there are enough unanswered questions to make us want to avoid getting locked in too closely with Israel.”

Concerns about Israel’s nuclear program were tabled by the United States during the build-up to the Six-Day War and its aftermath.

Regarding Rostow’s team who “found no evidence of a nuclear weapons program” at Dimona, this American reported in HEROES, MUSES and the Saga of Mordechai Vanunu:

In April 2015, The National Security Archive of George Washington University published documents detailing the discovery of Israel’s nuclear deceptions, debates over Israel’s lack of candor and efforts to pressure the Israelis to answer key questions about the Dimona during the Eisenhower years.

This ‘discovery,’ which came as the presidency of Dwight D. Eisenhower was drawing to a close, caused apprehension in Washington by raising concern about regional stability and nuclear proliferation, and it also produced annoyance because Israeli officials at all levels repeatedly provided less than credible answers to U.S. questions about Dimona…

Read More about that HERE

Next Chapter in this series: President LBJ and the Rise of Christian Zionism

Will soon be published HERE

Ban the Hate in America Not Just Its Symbols American Arabs