Chicago Mayor Richard M. Daley declared November Arab American Heritage Month in 1991, kicking off an annual commemoration of the contributions made by American Arabs to this country, the state of Illinois and to the City of Chicago. Mayor Rahm Emanuel killed the event but American Arab leaders are hopeful he may correct his actions and recognize the rights of American Arabs

Chicago Mayor Richard M. Daley launched Arab American Heritage Month for Chicagoland’s Arabs in 1991, declaring the month of November as a period to recognize the contributions that American Arabs have made to this country, the State of Illinois and to the City of Chicago.

Daley set an example that was quickly copied in states and cities around the nation, although there is no national heritage month celebration.

Former Illinois Gov. Jim Edgar extended the commemorations throughout the State of Illinois in 1998.

The month usually involves American Arabs showcasing their contributions through historical and cultural events, photo displays, musical performances, lectures and speeches, and through coordination with mayors in cities throughout the State of Illinois.

Officials of politically motivated American Jewish organizations including the Jewish Federation of Chicago and the Jewish United Fund have constantly opposed many of the events, especially those which highlighted the achievements and contributions of Palestinian Americans, who are the majority of Arabs in the Chicagoland area. In 2007, they vigorously protested Palestinian heritage images at the first annual Arabesque Festival.

The next largest Arab population in Illinois is in Peoria, which is predominantly Lebanese.

Officials of the Jewish Federation and Jewish United Fund have lobbied to prevent displays that showcased Palestinian American heritage in part mainly because the State of Israel has refused to recognize Palestinian rights or the right of a Palestinian State to exist. Many Israelis deny that Palestinians even exist till this day because of anti-Arab racism and anti-Palestinian hate. The leadership lobbied Mayor Rahm Emanuel, who has refused to speak about the efforts, and even intimidated the mainstream news media and its reporters into not covering Arab Heritage events. In 2011, the Arabesque Festival was terminated.

In 1999, two Federation officials protested a photographic display that I created called “Faces of Chicagoland’s Arab Community” demanding that two of 36 enlarged photos showing Arab Americans in everyday life, which portrayed Palestinians celebrating their heritage waving the Palestinian flag and protesting against bigotry at the Chicago Sun-Times, be removed.

The photos were removed without allowing me to challenge the lies asserted by the Jewish Federation.

Federation officials also lobbied Mayor Daley and Mayor Emanuel and within days of Emanuel’s election, he gutted the Arab Advisory Commission in 2011 and contacts with American Arabs was cut-off.

Click here to listen to a podcast on the anti-Arab efforts or pro-Israel organizations in Chicago to block Arab heritage celebrations.

Click here to view the Jewish Star Newspaper archives story in July 2007 on protests by Jewish organizations against the Arabesque Festival which was the cornerstone of that year’s Arab Heritage celebrations.

Click here to view the Jewish Star Newspaper archives story in August 2007 on protests by Jewish organizations against the Arabesque Festival which was the cornerstone of that year’s Arab Heritage celebrations.

Jewish activists were enraged that attendees distributed flyers criticizng the racist bias of the Chicago Sun-Times, which was owned by vicious anti-Arab racist Conrad Black. The newspaper also had no Arab or Arab Muslim reporters or columnists and refused to cover the Arab community,e xcept when the stories portrayed American Arabs in a negative light.

Many American Arabs have urged that Mayor Emanuel meet to discuss this history of problems, but so far there ha sbeen no response from Mayor Emanuel.

During a brief meeting I had with Mayor Rahm Emanuel at an Iftar hosted by his office for Muslims, he was very respectful and gracious, but he didn’t address the problems. The majority of the 300 Muslims at the Iftar were non-Arab. Only about eight were of Arab heritage and had been invited by Muslim Activist Salman Aftab who said he hoped that the Arab community could come together and support Mayor Emanuel.

Hopefully, that can still happen.

In 2005, I authored the only book that address the history of Arabs in America called “Arabs of Chicagoland.” The book was published by Arcadia Publishing. Click here to order a copy. 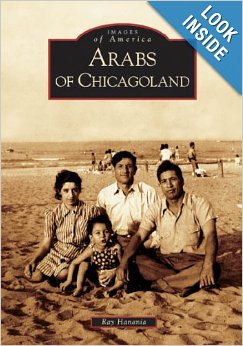