The Abrahamic Reunion joined musician James Twyman for peace in Syria at the border of Israel on Monday.

The Abrahamic Reunion is a group of spiritual leaders–Jews, Christians, Muslims, and Druze who have been working together for over a decade promoting inter religious harmony in the Holy Land.

On February 1st James Twyman and the Abrahamic Reunion united millions of ‘instruments of peace’ who meditated world-wide while over 100 had ‘boots on the ground’ meters away from ISIS, Nusra Front and Hizballah controlled territory on the Golan Heights border of southern Syria as the visible witness of the largest synchronized peace vigil in history.

The vigil ‘occupied’ the same areas tourists to the Golan Heights have gone to “war-watch” the fighting in Syria with binoculars, chips and beer.

On this week’s “Real Time with Bill Maher” he raised awareness of James Twyman’s “concert” for Syria but neglected to enlighten his audience that the “folksinger and idiot…the nut who calls himself a Peace Troubadour,” has been invited by many world leaders and peace organizations to perform concerts in countries at war and he is also a New York Times bestselling author of 15 books.

#AllLiesMatter and so do omissions.

This reporter is one of the four million viewers of “Real Time with Bill Maher” who is NOT an atheist, agnostic or religious;

But a spiritually driven political peace activist who applauds James Twyman and the members of The Abrahamic Reunion who have been proving that Israelis and Palestinians can live together in peace and cooperation. 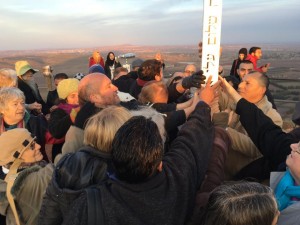 James Twyman reported: The Rainbow, the Battle and the Wolves

Today millions of people joined together to claim the reality of peace for all those suffering in Syria, especially the children. Three amazing things happened that I want to share with you, miracles that show us the power of our shared, focused energy and prayers.

As we drove to the overlook, someone on the bus said “Look at the sky.” We looked out the window and saw a brilliant rainbow that completely circled the sun. It felt like a sign of what was to come. In an hour millions of people would join us energetically, sending their light into the situation in Syria, without judgment. The rainbow meant we were not alone.

Hours before we arrived a battle raged just beneath where we stood. Bombs exploded and guns fired at the bottom of the hill just beyond the security fence. It seemed that we were up against more than we anticipated, but then something incredible happened. It was as if the war stopped while we joined together as one. The battle simply ceased, and remained that way through the entire meditation.

Over 100 people from many spiritual paths sat in silence as we were joined by you and so many others. We held that space for 15 minutes, and when I looked at the clock to end the silence, before I said a word, the sound of a single wolf howling just below us echoed through the air, then more until there were dozens of wolves that howled for exactly one minute, and then stopped. It was one of the most incredible things we ever heard.

This is just the beginning…

While in Jerusalem in December 2005, Eliyahu informed this reporter why he is a Rodef Shalom: a Pursuer of Peace and promoter of the indigenous Palestinian Reconciliation technique known as Sulha.

Sulha is also a group of Israelis and Palestinians who meet regularly to encounter the other in our full humanity. Together, we demonstrate that we, the children of Abraham/Ibrahim, share a common destiny…at the height of the El Aksa intifada, when Israel and Palestine were locked into terror of the other side, the Sulha Peace Project was born. As coffee shops exploded and soldiers fired into crowds of youths, we brought Israelis and Palestinians together in a human encounter and, through wholehearted listening; we explored and strengthened the bonds that link us with each other. We’ve been doing it ever since.

Sulha wisdom is manifested over a cup of coffee; in the offering and accepting.

Eliyahu explained that it begins when one of two tribes who have been feuding for generations, or even a divorcing couple with one desiring to reconcile, offers the other a cup of coffee.

Acceptance of the coffee fulfills all obligation; but the war or bad feelings continue on.

A second cup is offered and if accepted this goes beyond what is required.

The third cup begins as does the bargaining process.

It may take many pots of coffee but in the end a physical embrace or handshake confirms the reconciliation.

Then a Hafla: a celebration; a three day party is thrown by the stronger one who offers hospitality.

When I asked Eliyahu to define his spirituality he stated: “I am a Flexadox Jew, I am flexible and open, but remain orthodox.”

Eliyahu is grounded in the Torah and open to the wisdom of all faith paths, in particular Sufi, Eastern philosophy and what Jesus really said. 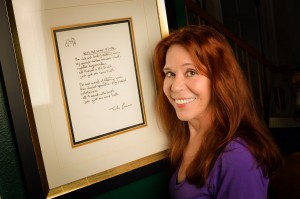 Give me some truth and The Beatitudes

Safety is Our Common Responsibly, can’t be ignored Bloggers