At a luncheon they hosted in Saturday at Fattoush Restaurant in Chicago’s Southwest Suburbs, the heart of Chicagoland’s Arab American community, the David’s presented their community news and information website to a gathering of 40 of the community’s most influential leaders.

Warren David offered a powerpoint presentation following the light meal to detail the many assets that the new website ArabAmerica.com offers to the Arab American community including a national calendar, an aggregation of news stories about American Arabs and Muslims from around the country, and the invitation to join Arab American on a “Community Board” that would discuss ways to empower the community.

“We need to come together under the Arab identity,” Warren David told the gathering. “Our goal is to empower the community.”

David noted that he and his wife Amal launched ArabDetroit.com in 2007 and then expanded it to ArabAmerican.com this past year.

The site sends out an email with information about feature stories, news and videos every Wednesday to more than 100,000 email recipients, a record set this month.

In response to questions, Warren David said that ArabAmerica.com is also a base that can be used by the community to network. he said he is not seeking funds and that the venture has been funded out of his own pocket and with some generous donations from several supporters.

“I have no agenda. My name is Warren David and I am an Arab,” Warren David said. “Our agenda is an Arab American agenda.”

David most recently served as the National President of the American Arab Anti-Discrimination Committee, which entered its 4th decade in turmoil and under attack from extremists. After David left, ADC’s national board failed to push back against the extremists and allowed the organization to since fall apart amidst the rubble of other national organizations based in Washing DC that long ago lost their influence and constituencies.

But David said he wasn’t discouraged and today ArabAmerica.com is based in Washington DC playing a major role in publicizing community outreach, activities and events. 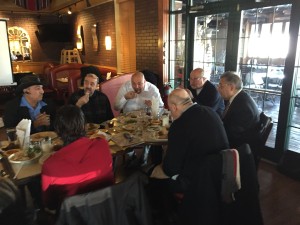 David also announced that the website will expand its broadcast services which include online radio and music to include video broadcasts, creating a virtual Arab American TV Channel, online at TV.ArabAmerica.com.

The reaction was positive.

“I was encouraged by the leadership that was able to come together for this. It shows that there is a need for the community to get together,” said Mansour Tadros, publisher of Chicago’s leading Arab American newspaper The Future News.

“I am encouraged by what they are trying to do. The important thing is to make that link with the community and more importantly to have them provide a foundation for the many organizations that attended. I was impressed and I think if they deliver, it will be a benefit.”

Tadros said that not enough is being done to reach the community “as Arabs,” especially the younger Arab Americans.

“I have never seen an event with the people who attended this meeting come together. If we can do this more often, we can move Chicago and strengthen the Arab community,” Mansour Tadros said.

Warren David stressed that the key is answering the question, “What does the Arab community get from our platform? And when they see the possibilities, I think we will see our community strengthen.”

President and CEO of David Communications, Warren David epitomizes the entrepreneur who turns visions into thriving enterprises. His career comprises several organizations that he created and developed that have given him a solid track record in the field of communications and a sterling reputation for quality service, spirited management, and high personal and professional integrity.

Mr. David always brings a special flare to projects and events, often serving as program coordinator, moderator, and/or master of ceremonies. Well-rounded in his career and commitment to community and culture, Warren David has mastered the art of making visions real and instilling hope and optimism in his associates and friends. 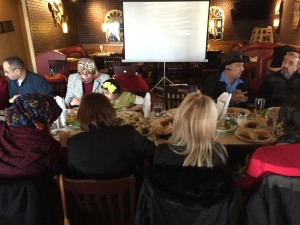 More than as an entrepreneur, Mr. David excels in mass media communications, community activism and civic responsibility. His enthusiasm for multi-cultural projects is contagious, and his ability to attract people to them is unparalleled.

As Marketing and Sales Director for ANA Radio & Television Network from 1994 to 1996, Mr. David directed, trained, and motivated a national sales force in several major U.S. markets. He increased sales revenue in the Detroit region over 100 percent in less than 12 months.

As Executive Producer of “Arabesque: Insights into Arab Culture” for WDET-FM, he won a Gold Medal from the International Radio Festival of New York. NPR distributed his program to more than 50 affiliates nationwide. For “Arabesque,” he produced compelling programs on all aspects of Arab life and culture.

Mr. David served as Executive Producer for “Our Life in Detroit”, a radio program for Arab-Net/ANA Radio Network. He has produced and directed several video programs that focused on Arab culture. “From A to Z: Arab Contributions to the World” has been shown several times on Public Television in Detroit and at many educational institutions throughout the U.S.

Always mindful of the value of giving back to one’s community, Mr. David enthusiastically and tirelessly participates in a variety of organizations. He currently serves as a board member of the American Syrian Arab Cultural Association of Michigan (ASACA), on the Advisory Board of the Center for Arab American Studies at the University of Michigan-Dearborn and as an executive board member of St. Andrew’s House.

Mr. David is a graduate of Ohio University’s School of Communications in Athens. He and his wife, Dr. Amal Khalil David, have two daughters, Zayna and Ameera.