Muslim prisoner Mohamedou Ould Slahi offers a poignant story of an innocent man who faces  torture by American soldiers at Gitmo with an inspiring sense of humor. His book “Guantanamo Diary” is a must read for Americans, Muslims, Christians and Jews.

Most Americans are familiar with the story of Anne Frank, the Jewish girl who hid with her family in the attic of an Amsterdam business during the Nazi occupation.

After Anne’s sister was ordered to report to the Nazis in June 1942, the Frank family went into hiding, only to be discovered two years later. The eight family members were sent to Nazi death camps.

As a young student, I was required to read the Nazi-era memoir, “Anne Frank: The Diary of a Young Girl.” It was a devastating story, even though I am Palestinian and relatives and friends of my parents were brutalized by Jews in Israel less than six years later.

Nonetheless, despite the anguish caused by Israel against my people, I felt compassion for Anne Frank and her family. It wasn’t about her being Jewish or me being Palestinian. Her diary was that of a young girl recording the horrors of Nazi oppression.

Only Frank’s father, Otto, lived. The rest of the family was killed. Anne died of Typhus at Bergen-Belsen, tragically weeks before the concentration camp’s liberation in 1945, a war my father and uncle fought in against the Nazis.

Last week, I began reading the 21st century version of Anne Frank’s frightening diary. But this diary is written by a Muslim, Mohamedou Ould Slahi (Salahi) who was falsely accused of participating in terror plots against the United States.

Slahi’s story begins on Nov. 20, 2001 when he voluntarily turned himself in to his government in Mauritania to prove his innocence.

What was Slahi’s crime? He was trained in Afghanistan by Americans and the Mujahedin in the 1990s against the Soviet Communists. There, he met several people who later became terrorists, like Ramzi bin al-Shibh, and his ex-wife’s brother who later became a spiritual adviser to Osama Bin Laden.

Slahi was never charged with a crime because he never did anything wrong.

Once it was clear Slahi was not involved in any terror planning, wouldn’t you think that he would be released so that our “investigators” can hunt down the real terrorists?

That’s not what happened.

American officials ordered Mauritanian authorities to arrest Slahi and then send him to Jordan, where he was brutally tortured by King Abdullah II’s Secret Police, the mukhabarat.

His torture was continued at Guantanamo Bay (Gitmo) where most of his book details take place.

Slahi was sexually abused by American female military interrogators and prison guards. He was beaten by American soldiers. He was shackled in chains, and forced to live in filth in freezing conditions without food and clothing, without bathing, and without being allowed to use the toilet. His religion was constantly libeled, and he was threatened that if he didn’t confess, he would be killed.

Every night he could hear the screams and cries of others who were tortured. Many were killed but the U.S. has done everything to keep the facts of their torture program from being fully exposed.

Ironically, despite the torture, Slahi maintains his sense of humor in his diary. The torture didn’t produce one fact that could help the torturers from protecting the American people from other impending or planned terrorist attacks.

In 2005, as his case became known through the efforts of his worried family, lawyers demanded to see Slahi and he was able to get his diary to them. It took 10 years but “Guantanamo Diary” was just published.

Slahi’s book is heavily “redacted.” Large sections of his writing have been blacked out. And that makes the book even more frightening. What isn’t blacked out is horrific and unconscionable. What is in the blacked out portions? 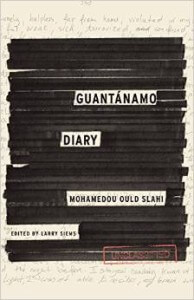 Slahi’s story is not just about torture. It is about the failure of the American war on terrorism. We spent more time using torture to force confessions instead of using professional anti-crime strategies to find evidence and expose the real terrorists. Maybe that’s why ISIS has been so successful against us. Because we, Americans, have failed.

What America is doing to Slahi is shameful. It’s so un-American. Injustice. Oppression. Torture terrorism.

Slahi needs to be released immediately.

I doubt American schools will require that young children read his story. It’s too shameful. We expect the Nazis to be animals. But American soldiers? Both men and women? Every American should read his book. It’s not too late to save this country from becoming filled with the monsters that terrorized Anne Frank.

What the Nazis did to Anne Frank is horrible. But what America is doing to Mohamedou Ould Slahi is worse. He deserves to be free.