On Tuesday Amnesty International emailed this update and action request in support of a free Mordechai Vanunu:

Once again, the Israel High Court of Justice (HCJ) has rejected Vanunu’s petition against restrictions on his freedom of movement, association and expression, in their decision dated 25 January 2015.

In summary, the judges basically accepted the State’s position that the three orders are still justified and that there is no reason to cancel or amend them further (with one minor exception – see below). The orders remain valid until 31 May 2015.

Vanunu’s lawyer told us that there was a small shift in the Court’s attitude to the case and that the judges expressed some dissatisfaction at the length of time the restrictions have been imposed upon Vanunu. Thus, they requested the State to consider some changes.

Vanunu’s lawyer argued that the prohibition on communications with non-Israelis has no security purpose and is meant only to drive Vanunu to “technical” violations of the orders. The Court was concerned about this and in an ex parte hearing suggested some amendments.

In response the State relaxed this aspect of the restrictions so that (according to the decision issued on 25 January 2015) “… the petitioner may – even without prior permission – have an occasional conversation orally with foreign nationals or foreign residents, provided this conversation is a one-off event, takes place in person, is not planned in advance, and takes place in a public place, for a period of not more than 30 minutes. It should be emphasized, for the avoidance of doubt, that such conversations with foreigners are not to be conducted in writing or any form of media, including the internet.”

The State argued that this was “significant relief”.

Vanunu’s defence rejected this move as being merely “cosmetic” and argued that the limitations should be lifted completely but the Court ruled that for the time being this relaxation on the restrictions should suffice and that if Vanunu does comply, then, with time, more changes should be introduced.

Please continue to call for the restrictions on Mordechai Vanunu’, which Amnesty International considers arbitrary, to be lifted.

Finally, please remember that one of the primary targets – the Minister of Interior – is no longer Gideon Sa’ar who is replaced by: Gilad Erdan. 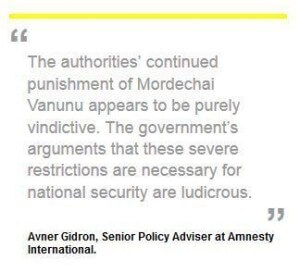 My email to Israel’s Prime Minister and Ministers of Interior, Foreign Affairs and Defense:

RE: The States decision issued on 25 January 2015 allowing Vanunu to have conversations with foreign nationals for no longer than 30 minutes.

In March 2006, a few weeks after Vanunu’s FREEDOM of SPEECH Trial began for speaking to foreigners who were media, we taped “30 Minutes with Vanunu” which is freely streaming at YouTube.

Petition to World Media and Israel: We are not free, until Vanunu is free!

Comment (1) on “Amnesty International Calls for Action to Free Vanunu”