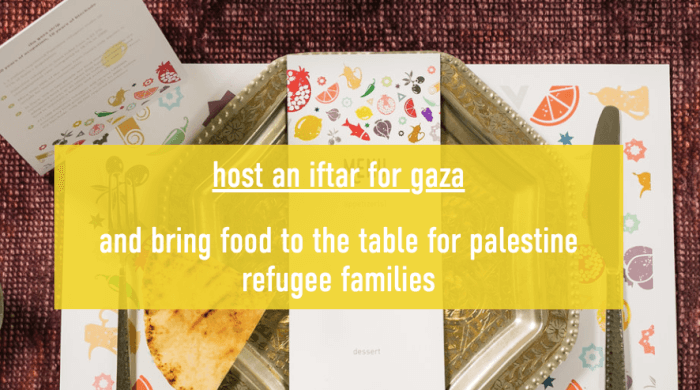 The United Nations Relief and Works Agency is organizing worldwide support for Palestinian refugees living in the Israeli besieged Gaza Strip this Ramadan. You can help, too, by hosting an “Iftar for Gaza” event and donating proceeds to support the Palestinians living in the Gaza Strip.

This is especially important because the United States has cut back financial support to the Palestinian refugees and they need your help today!

Last year we cooked up a way for you to help put food on the table for Palestine refugees in the Gaza Strip. After a successful run last year, we’re bringing Iftar for Gaza back and you can sign up to host starting today!

The concept is simple: organize a gathering during Ramadan (mid-May through mid-June 2018) that will feed more than just the guests around your table.

With less than 30 days until Ramadan begins, now is the time to: