My family and I took a quick trip to Palestine in August. I was fortunate enough to meet with a doctor in Jerusalem, who was given permission to go into Gaza during the ceasefire that held for 5 days before the fighting resumed ending with the permanent ceasefire agreement. I asked the doctor to try to find out about the Gaza sisters, Hala and Fatimah. The instant I gave her their family name, she winced and said in not so many words that the news would most likely not be good. That family was hit hard, the doctor explained.

And so, I waited. 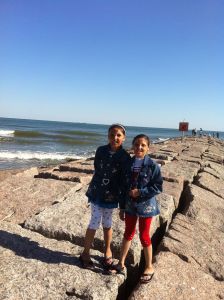 I went through the rest of my tour in Palestine and left without hearing a word from the doctor. The instant I landed in the airport coming back home, I received this very short email:

“The news is good, they had evacuated their home but they are fine and are now back in their home apparently, I got this through the coordinator who was responsible for them form PCRF.”

A sigh of relief, and a quick prayer for this favorable outcome carried me through the rest of my day. And then I looked at the date: August 19st. The fighting had resumed.

Two days later, on the morning of August 21st, I got another email from the doctor:

“Hope we will get to see you again, the situation is Gaza is pretty dire today.”

That was the last I heard. I keep waiting for more news. Nothing so far!

(Lilas Taha is the author of “Shadows of Damascus”, a contemporary novel inspired by current events, and can be reached through her website at  http://lilastaha.com)