If you are a business trying to reach American Arabs and American Muslims, those kinds of publications, no matter how large their traffic, will not help you much.

We spoke with Ray Hanania, the managing editor of the Arab Daily News online to understand the strategy being used to make this important distinction. He and co-editor Ali Younes oversee the website at www.TheArabDailyNews.com and work with a staff of freellance bloggers and professional journalists to produce the content.

“We immediately recognized that many very important stories about American Arabs were not being written. In a lot of instances, these stories are being reported in a very narrow tunnel vision that doesn’t appeal to American Arabs or Muslims, when they have everything to do with American Arabs and Muslims,” Hanania explained in an interview Friday.

“A great example is the story of Steve Jobs and the US Post Office. The Post Office announced that they ere considering the issuance of a new postage stamp sometime this year that would include an array of well known individuals and celebrities. They included the late rock guitarist Jimi Hendrix, Michael Jackson, James Brown and Steve Jobs, the founder of Apple and the man who almost singlehandedly changed the way the world thinks about and uses computers.”

Thousands of mainstream news media reported that story, Hanania said, but only one explored the one aspect of the story that was most pertinent to American Arabs and Muslims. Steve Jobs was adopted as an infant by an American couple. His father was a Syrian student. Steve Jobs is an Arab American!

“Now, the fact that he is of Arab heritage may not interest others, but it does interest American Arabs and American Muslims. And when you explore that aspect of this huge story, because the announcement that Steve Jobs might be honored on a postage stamp, failing to explore the Arab heritage aspect of it means you will be missing a major audience,” explained Hanania who worked for more than 35 years as a professional journalist, including 17 years covering Chicago City Hall for the Chicago Sun-Times.

“There are more than 7 million Muslims in the United States, including Arab Muslims, and more than 3 million Christian Arabs. That’s 10 million people who probably lives in concentrations in five major urban areas including Los Angeles, Chicago, Detroit, Houston and New York/New Jersey. How do you write a story and not try to appeal to that audience constituency? If you are a business, you want to reach them. News stories are like horses. They carry the consumer to your product as a business. If your story is not carrying everyone, your are missing out.”

Hanania said that The Arab Daily News online newspaper does what most other publications fail to do, “Serve as the transportation, the camels, carrying your valuable advertising dollars to a significant consumer audience that is high end. The American Arab and American Muslim community are mostly professionals. Their average income wages are in excess of $200,000 a year. They are a driven ethnic minority, involved in small and large businesses and in some of the most lucrative professions including medicine, law, architecture and more. If your advertising dollars are not including media vehicles that are targeting them, you are losing out.”

Hanania said that the heart of this monied constituency speaks English, not Arabic, and reads mainstream publications. They are active on the Internet. And for most of them, the Middle East conflict is little more than that, a conflict.

“The majority of American Arabs and American Muslims are educated about the Middle East conflict but that’s not what drives their lives. They are driven by the same things that drive every public constituency. They want to read stories about themselves. Stories about their successes. Stories about their achievements. Stories that intersect with success in American society and their cultural interests. The Arab Daily News is all about that.,” he said.

Hanania said that The Arab Daily News provides a wide range of information. He built the newspaper using his experience as a professional mainstream American journalist and professional communicator. Hanania is President/CEO of Urban Strategies Group which provides and has provided media and communications strategy services to more than 100 elected officials, governments and major corporations.

“We have opinion commentary. We have news and analysis on the Middle East conflict and events taking place in the Middle East. But the difference that sets us apart from everyone else, is that we also have a majority of content that focuses on Americans who happen to be Arab and who happen to be Muslim. They have the same interests in a new postage stamp and Steve Jobs, just like every other American. But they also have an interest in themselves, as Arabs and Muslims. That’s why the Steve Jobs story we published was so effective in reaching American Arabs and American Muslims far more effectively than anyone else,” Hanania said.

Click here to read how the Arab Daily News reported on the Steve Jobs/Postage Stamp story. 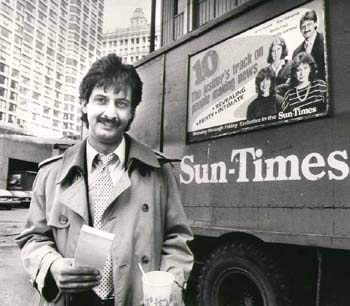 “If you want to reach American Arabs and American Muslims, you have to be smart. You can’t just advertise on website based in the Middle East that are predominantly in the Arabic language, or websites that almost entirely regurgitate the same old stories about why Arabs lost the war in 1948 in Palestine. You have to reach beyond that community of Middle East Arabs,” Hanania said.

“More than 85 percent of the visitors to the website at www.TheArabDailyNews.com came from the United States,” Hanania said. “That’s because the majority of our stories are about American Arabs and American Muslims. We are writing stories that most other mainstream American news media are completely ignoring or are missing. And, we are writing stories that the vast majority of American Arab and Muslim publications don’t put much priority on because they are concentrating on publishing opinions on the Middle East, covering Middle East news and writing about conflicts overseas. We give our readers a healthy mix of Middle East stories, but we also serve up a product that is unique, original and honestly rare with a focus on Americans who happen to be Arab and who happen to be Muslim, and, who happen to be looking for businesses that recognize them for the value that they offer,” Hanania said.

A search of Google News showed that The Arab Daily News was the only media to cover the Steve Jobs story as a “local” story for American Arabs. The story connected and in fact is one of the highest read stories at the website, during the past three months.

“If you produce quality and compelling content that an audience wants to read, that audience will come to you and that’s what they are doing,” Hanania said.

“Not everyone understands that simple premise. It is about the audience. It’s not just about traffic. You need to give the audience what it wants. If you do, then the advertisers you are carrying and who sponsor your site will benefit far more there than they will anyplace else.”

(Thabet al-Arabi is a freelance writer based in Boston. Reach him at ThabetalArabi1948@yahoo.com)