Joseph R. Haiek immigrated to the United States right after the 1967 Arab-Israeli war after his city, Jerusalem, was occupied by Israeli forces.

But no American Arab has done more to embrace his newfound nation of America more than Joe Haiek, who in 2011 was recognized with the Ellis Island Medal of Honor for his distinction as a proud American who has never forgotten his roots.

Born in 1932 in Jerusalem, Haiek came to America with his family and his wife, Teresa who passed away last year. Teresa Haiek was Armenian and she spoke several languages, including Arabic, English, Armenian and Italian.

“She was my inspiration always pushing me to do what I could to help our community,” Haiek said about his late wife. “She always supported me in my efforts to tell our story not just to Americans but to American Arabs, too.”

Haiek said he has no regrets about not becoming a doctor or a lawyer. Instead, his first job was in an advertising agency in Los Angeles, where his family settled in the 1960s. Haiek said he was always surprised at how little Americans knew about Arabs, so he rolled up his sleeves and started working on telling the Arab story.

“I found work at an advertising agency, starting in the mail room. Eventually, they promoted me into accounting.”

Haiek said he was impressed with the professional of communications, advertising and journalism and in June 1972, while still working at the advertising agency during the day, spent his nights and weekends putting together the first issue of the News Circle Magazine, which focused on American Arabs and the history of Arabs in America.

In 1974, Haiek took it one step further, publishing the first edition of the must-read Arab American Almanac which was only 96 pages. In 1978, Haiek founded the Arab American Historical Foundation to support the Almanac. In 1992, the Almanac grew to 448 pages. And it has continued to grow ever since.

In 2011, Haiek published the 6th edition of the Arab American Almanac, which grew to more than 608 pages of detailed information of the history of Arab settlement in America, pictures from American Arab communities and people, and profiles and biographies of famous Arabs in America.

“It never failed from the day I lived her until now, Americans will come up to me and ask, ‘Did Arab serve in the military to defend America?’ I would say of course we did. Do you not know John Abizaid, who was the former head of the U.S. Central Command during the war in Iraq?” Haeik said still amazed at how little Americans know about Arab history in this country.

Haiek can recite name and instance of many great Americans and was proud to remind the public that Arabs have been active in the American military going back many generations. There is Korean War hero, U.S. Air Force Col. James Jabara. World War II Army officer Maj. Gen. Fred Safay who fought alongside Gen. George S. Patton. There was Brig. Gen. Elias Stevens who served on the staff of Gen. Dwight D. Eisenhower, who later became a U.S. President. In 1944, one of our Navy’s ships, the destroyer escort USS Naifeh, was named in honor of an Arab American hero Navy Lt. Alfred Naifeh from Oklahoma.

In May 2011, Haiek received the Ellis Island Medal of Honor for his contributions to his community and the nation. The prestigious honor is recognized by the U.S. Senate and House of Representatives and recipients are listed in the U.S. Congressional Record. The medal was established in 1986 by the National Ethnic Coalition of Organizations, whose mission is to foster respect and understanding among religious and ethnic groups and to honor and preserve the cultural diversity that makes the United States a strong nation.

“Arab Americans are independent,” Haiek said at the awards ceremony. “They are proud of being Americans — and one of them is me.”

“It was a lot of work to start a news magazine. We started with heavy distribution in the Los Angeles area and then we slowly started to expand to Washington D.C, then Chicago and then to other cities. We received lots of encouragement from people from around the country, but it was very hard to get support,” Haiek concedes.

“The failure of the community is that they can never come together as one strong voice. I lived with it all my life. They just don’t care. They could come together and be a very strong community.”

Haiek said he dealt with the rivalries and divisions throughout his life.

“I remember one day a doctor came to me and asked why I put his photo below the photo of another Arab American. They were on the same page but he didn’t care. He wanted to be above the other person. That was the mentality of our community that we faced then and we face today. We focus on insignificant things instead of what’s important,” Haiek observes. 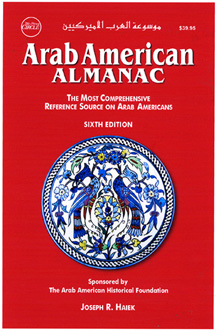 Haiek says he is most perplexed by the divisions that exist between Arab Muslims and Arab Christians, and the lack of recognition of Christian Arabs throughout.

“So many Americans come up to me and ask if I am Christian, or am I Muslim? I said I am Christian. They say, why are you saying you come from Palestine if you are Christian? That is a Muslim country. I tell them Jesus is from Palestine,” Haiek says with a sardonic laugh.

“People would come up to me and asked me why I have a cross on the door of my home? I said, because we are Christian. We are the original Christians. Christianity came before Islam and they adopted Arabic to print their Quran. As a Christian we love Muslims. Muslims and Christians work together. We have made great contributions to each other. Yet, we don’t always work together.”

Haiek praised Muslims and said Muslims and Christians can do a better job of coming together to promote Arab heritage, culture and issues.

“We can be so much stronger if we would all work together and if we didn’t get so upset about silly issues that separate us. We have so much that brings us together, yet the little differences are what sometimes keep us apart,” he says.

Haiek says he continues even in his late retirement to distribute the Arab American Almanac which showcases the great success stories of Arabs, Muslims and Christians in our community.

“The most important issue that I am concerned about is to distribute the Arab American Almanac. We still have some copies in stock and I would like to get them out to our community so that our community knows its history. Many in our community don’t even really know who we are or who they are themselves,” he says.

“I never regret becoming a journalist. I am proud of what I have done and I served the community with the little means we had. I wish the community would recognize how powerful we could be if we did a better job publishing our views and stories.”

Haiek acknowledges that many Arabs fail to recognize the power that exists in being involved in the news media and in supporting the Arab American news media.

He helped found the Arab American Press Guild in Los Angeles in 1985 and the group continues to meet on the last Thursday of every month.

“We bring speakers and host events but so many in our community don’t even know we exist and don’t participate,” Haiek says.

“The largest concentration of Arab American press is right here in Los Angeles but they don’t work together. In our community, people won’t support a good cause because someone they don’t like is involved or at the event or publishing a newspaper. We don’t have a television show and we don’t have radio but we have six or seven newspapers. We don’t support each other. We divide each other. We don’t come together.”

Lebanon on a failure track for the near future American Arabs