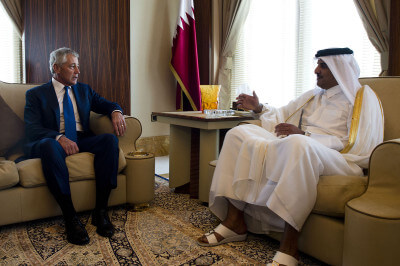 In an unprecedented diplomatic row between conservative Arab Gulf monarchies, Saudi Arabia, UAE and Bahrain have withdrawn their ambassadors from Qatar in protest of what they deemed as an “ interferences” by Qatar in their internal affairs. The move followed a stormy meeting last Tuesday between the Gulf Cooperation Council, GCC, foreign ministers where Qatar was asked among other things, to “stop its support for the Muslim Brotherhood group in Egypt” and rein in Al Jazeera’s “ slanted coverage” of the Arab uprisings across the Arab world.

“Saudi Arabia, UAE and Bahrain regret to announce that they will take what they deem to be the appropriate steps to protect the security and stability of their nations by withdrawing their ambassadors from Qatar,” A statement by the Saudi foreign ministry said last Wednesday. The statement added that the rare decision was taken after Qatar failed to honor its agreements and responsibilities with the GCC countries.

The GCC was established in 1981 to unify the foreign and defense policies of the member states which also include Oman and Kuwait. The latest row is seen a case in point of how divergent and different GCC countries are when it comes to their foreign and regional policies .

Qatar is one the richest Arab states and in the World, has played a key role in supporting Arab uprisings in Egypt, Tunisia , Libya and in Syria, but last year’s coup in Egypt that toppled the Muslim Brotherhood government of Mohammad Morsi, is seen as set back to Qatar’s ambitious and activist foreign policy.

Unlike its conservative neighbors and partners in the GCC countries, Qatar leads the Arab world in an activist foreign policy that is the hallmark of the father of the current Emir, Sheikh Hamad Bin Khalifah Al Thani which explains the recent diplomatic setback for the young Emir, Sheikh Tamim who took over the leadership of his country last year.

According to Paris-based Gulf analyst Nidal Shoukeir, Qatar has had three foreign policy approaches in its recent history . The First “ was the quietest conservative policy of the grandfather of the current Emir that avoided troubles with its big neighbors Iran and Saudi Arabia. Second , is the initial policy of crisis management or mediations between states and groups which put Qatar on the regional and international map as a hub for the regional and international efforts to manage and resolve crisis . The third one is second policy approach by the father which took an activist or a strong-player role in shaping events and political outcomes in the region.”

Obviously the activist foreign policy approach has made Qatar a lot of enemies in the region and it does not look like it’s working. “The current Qatari leadership[ therefore] will have to choose whether it should continue to play an activist role or go back to crisis-management policy that made her more friends than enemies.” Said Shoukeir  who is one of the Arab World’s prominnat Gulf experts . In the meantime, official Qatari statement published on the government News Agency stated that the government of Qatar “ regrets and is surprised by the decision and said it would not reciprocate with the same move ”It also added that it would remain committed to “preserving and protecting the security and stability” of the GCC countries.

Saudi Arabia and the UAE have supported the military takeover of power in Egypt and poured $ 12 billion to help the ailing Egyptian economy which stood in direct contrast to Qatar’s position that gave shelter and support to the deposed Muslim Brotherhood group.

A key figure that stands out in this diplomatic tug of war is Egyptian clerk Yousef Al Qaradawi whose fiery sermons against the Egyptian military leaders and criticism of Gulf States policies have ruffled many feathers in the Gulf and in Egypt.  Government sources in Gulf  told the Arab Daily News that silencing and removing Al Qaradawi from Qatar is a key demand by Saudi and UAE officials. But it is unlikely that Qatar will move soon enough to repair the damage with its neighbors especially when it comes to Al Qaradawi who holds a duel Qatari and Egyptian nationalities.

That said, however, and while it appears that the latest row might deal a mortal blow to the GCC alliance, giving  Saudi Arabia’s attempts  last year to transform it into a “Union” failed after Oman threatened to withdraw from it if,  Shoukeir, however,  thinks  otherwise.  He said that a resolution to the current crises is already in the offing due to mediations efforts by other GCC states that are already taken place.” The common and shared interests of the GCC countries are greater than its disagreements, therefore I am optimistic of a near resolution to the crisis.”

Fighting Islamic State: Getting Down To Root Causes Arab World