“Blood in the Water: How the US and Israel Conspired to Ambush the USS Liberty” details the USA-Israeli collusion of the attack on the USS LIBERTY during the Six-Day War and is the definitive work to end the over fifty-year long cover-up.

In the Synopsis of  “Blood in the Water: How the US and Israel Conspired to Ambush the USS Liberty”, author Joan Mellen explains:

In 2014 I was completing a book exposing dark truths about President Lyndon Johnson that had been suppressed by Johnson’s official biographers whose goal in recent years was to provide cover for an official whose actions not infrequently bordered on the criminal. One day I received an email from a fellow researcher who offered a challenging question: will you be including Johnson’s role in the attack on the USS Liberty? I had never heard of the USS Liberty. When I learned of the ambush of this unarmed USS Intelligence ship, and of Johnson’s role in planning it and then covering it up, I was at once committed to a course that resulted in a new book, “Blood in the Water,” whose subtitle is “How the US and Israel Conspired in the Ambush of the USS Liberty” devoted entirely to the events surrounding the LIBERTY. My goal was to discover who had planned the attack and what was their motive. 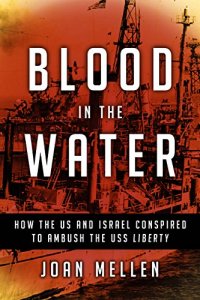 Temple University Professor Mellen has published 24 books and researched voraciously regarding the USS Liberty. However “none of the books or articles” she read could answer WHY Israel would attack an American ship and a few hours later admit that they had been behind the attack, but that it was an “accident.”

Mellen asserts that the virtually unarmed USS Liberty was brutally attacked with the intent to send that spy “ship and everyone on it to the bottom of the sea, because the perpetrators were determined to unseat the premier of Egypt, Gamal Abel Nasser by blaming him for the attack. Nasser was highly influential among powers in the Middle East as a neutral, a thorn in the side of the U.S. and Israel. The motive was to so discredit Nasser that he would fall easily from power, leaving his adversaries to maintain political control over the region.”

Mellen credits Commander David Edwin Lewis, who had been the chief intelligence officer on LIBERTY for providing “the most astonishing piece of evidence in the Liberty story: that Lyndon Johnson, defying the military code to leave no man behind, had abandoned the wounded sailors on the Liberty by cancelling the air support the Admirals had dispatched to the ship once they received an SOS: Johnson’s explanation was that: he did not want to “embarrass an ally.”

Mellen writes “Dave Lewis turned out to be humble, modest, brilliant, and yet at the same time forceful and determined that the truth be told about the USS Liberty. He felt personally responsible for two of the 34 who died because they had applied for retirement only for Dave to urge them to participate in one last mission, one that cost them their lives. Over the next four years, with Dave’s help, I was initiated into the intricacies of Navy protocols… I figured out what had happened, and why it had to be covered up by Johnson and all the presidents who succeeded him. The planning of the attack on these young sailors – by rockets, torpedoes, napalm and machine gun fire – would remain a secret from history and from the American public, and even from the surviving sailors themselves.”

Mellen’s “Blood In The Water” begins at the American Embassy in Tel Aviv, on the top floor presided over by the CIA chief of station John Hadden. Despite this American’s over eleven years of research regarding the USS Liberty cover-up, I had not been aware of the deep CIA connections beginning with John Hadden who Mellon ‘discovered’ when she uncovered a memorandum of a meeting between Hadden and Meir Amit, chief of Mossad, the Israeli intelligence services.

One of Hadden’s mantras was “never trust anyone” and the chapter introducing the then chief of CIA counterintelligence, James Jesus Angelton titled “Treason At The Top” exemplifies WHY Hadden’s mantra is also a warning for today. By 1954, James Jesus Angelton was the only person authorized to talk to Israeli intelligence and he began helping Israel build its atomic bomb soon thereafter.

Mellen writes that during the 1960’s “Angleton handled the Israeli desk always within the Cold War anti-Soviet ideology that was his stock in trade. It was Angleton who would view Israel’s instigation of the Six Day War as necessary to protect Israel’s nuclear reactor at Dimona from a ‘grand Soviet design’ that included a nuclear attack on the United States.”

Mellen uncovered the fact that it was Angelton who “sabotaged John F. Kennedy’s policy to send international inspectors to Dimona, where false walls were erected, elevators hidden, and dummy installations built to conceal evidence of the nuclear weapons program” just as nuclear whistle blower Mordechai Vanunu informed me a few weeks after his under-reported freedom of speech trial began in 2006:

As this American read Mellen’s chilling historical insights, which continue to fuel USA foreign policies in the Middle East, I was reminded of George Washington’s warning:

“Observe good faith and justice towards all nations; cultivate peace and harmony with all…and passionate attachments for others, should be excluded; and that, in place of them, just and amicable feelings towards all should be cultivated. The nation which indulges towards another a habitual hatred or a habitual fondness is in some degree a slave…a passionate attachment of one nation for another produces a variety of evils.”-George Washington’s Farewell Address – 1796

“BLOOD IN THE WATER” proves one can speak and write honestly regarding Israel without being anti-Israel or anti-Semitic; and its release after the Brett Favre furor was right on time yet recalls Pogo from the 1960’s: We have seen the enemy and he is US!

Kathy Griffin and the real US extremism American Arabs