This week another fact emerged regarding Israel’s nuclear weapons and their attack on the USS Liberty, America’s premier surveillance ship during the Six-Day War

In October 2007, this American began to learn about the USA Government cover-up of Israel’s 8 June 1967 attack on the USS Liberty while navigating in international waters during The Six Day War.

In June 2005, I learned about Israel’s WMD directly from nuclear whistleblower Mordechai Vanunu.

The answer was provided to me very unexpectedly on Sunday, March 25, 2007 when I happen to mention this question to retired Army Colonel and chaplain, Ryder Stevens at the Hilton Long Beach (California) when several of us had dinner with him following his church lecture, titled “Peace and Reconciliation Through Prayer!” I had helped organize sponsorship of his lecture by three local churches.

Ryder Stevens served 23 years of active duty.  Mr. Stevens said to me that while serving as a US Army officer at the Pentagon, he had access to read classified/top secret documents, communications and reports, etc., including those regarding Israel’s attack on the USS Liberty.

He indicated to me that based on evidence and classified documents he had read, that the Israel government/military deliberately and knowingly attacked the USS Liberty (intelligence ship) on June 8, 1967 because at that time the Israelis did not want the Americans to know they (the Israelis) were preparing to possibly use nuclear weapons, if necessary, during the Six Day War when Israel was losing one or more battles when there was a possibility that Israel could/might lose the war; that if Israel were to possibly be losing the war with its use of only conventional weapons, they (the Israeli government/military) were preparing for the clandestine possibility of using nuclear weapons and did not want the USS Liberty crew to find out and alert Washington because the Israelis knew that US government leaders would likely object and possibly prevent Israel’s potential first-use of nuclear weapons.

When I asked Col. Stevens if I could mention his name when sharing this important information, he objected.  As such and in the interest of disclosing and sharing the truth to hopefully help prevent future wars, I waited to share this for publication until after learning of his passing.  USS Liberty veterans, their families and the American people deserve to finally know the truth!  Instead of covering up the truth by failing to carry out its long overdue duty to conduct a Congressional investigation, Congress must do so ASAP! – N.D.

In 2005 I learned from Israel’s nuclear whistle blower Mordechai Vanunu: 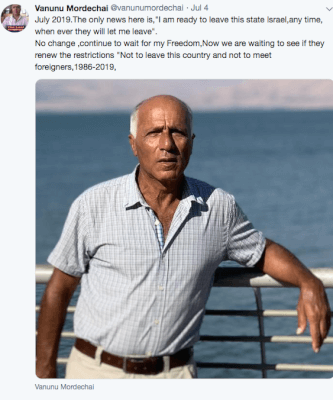 In April 2015, The National Security Archive of George Washington University published documents corroborating much of what Mordechai Vanunu said over three decades ago.

The Mainstream Media still has not reported on these documents that detail the discovery of Israel’s nuclear deceptions, debates over Israel’s lack of candor, and efforts to pressure the Israelis to answer key questions about the Dimona during the Eisenhower years; BUT this American has:

The USS Liberty’s struggle to end the USA government cover-up of Israel’s attack on Americans continues at the USS Liberty Veterans Association website.