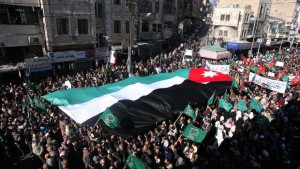 As the Jordanian Muslim Brotherhood organization (MB) is getting ready to hold a celebration in Amman this coming Friday for the 70 years anniversary of its founding in Jordan, a new confrontation between the group and the Jordanian government is looming on the horizon.

Ever since the group announced that it will hold the gathering of its members and supporters to celebrate its anniversary, the Jordanian Ministry of Interior is still debating, according to Jordanian press reports, between preventing the expected massive turnout on the false grounds that the group is “illegal” and thus having the risk of creating unnecessary confrontation and instability in the country or to let the group hold its celebration while at the same time trying to reduce its size by creating logistical obstacles against it.

The Jordanian political system view the Jordanian Muslim Brotherhood as a threat to its absolute hold on power, because in the absence of any real political parties in the country and considering that the governing elite deliberately weakened civic capital represented in labor unions, political parties, professional syndicates, the MB, therefore, stands as the only politically-religious organization that can muster a strong opposition to the government policies and programs. Currently, the MB is the only organized group where the urban and educated middle class can see in it a vehicle for political reform. Although it is clear that the Jordanian government is taking advantage of the destruction of the MB group in Egypt at the hands of its military regime, but Jordan would be making a strategic miscalculations if it follows in the same footsteps as Egypt which is a predatory state that suffers from deeply entrenched political, economic and social decay and practically on its deathbed.

While Islamic parties should in principle view the religious identity above all others, the new group projects itself as wholly Trans-Jordanian group with anti-Palestinian sentiments. Al Arab Al Youm newspaper reported in Arabic that one of the leaders of the new group, strange as it sounds, accused a leading member of the mother organization of “supporting Palestine”

The new group which was officially founded only few weeks ago and headed by former leader Abdel Majid Thnaibat, is trying to fend off charges from the public and leaders from the main group that it was constituted by the Jordanian intelligence, known in Arabic as the “Mukhabarat”. It is highly plausible that the new group was founded by the Mukhabarat in order to divide the main organization as it was reported by columnist Mohammad dawudiyeh in his Al Arab Al Youm column back in February.

Driving a wedge between political groups along the Palestinian-Jordanian lines has been a staple of the Jordanian Mukhabarat since the 1950s starting with Arab nationalists, socialists and communists and lately among Salafist-Jihadist groups and finally the Muslim brotherhood organization. It is divide and conquer policy par excellence.

While Jordan is a constitutional,stable and liberal monarchy with a strong and able military,but as all other Arab countries,is a weak and breakable state. This is because it lacks strong institutions as it has no independent judiciary,no free and independent strong media,and no accountability or rule of law and above all it has no social capital that in national crises can step in and glue the state together.

It is, moreover, totally dependent on foreign aid for its survival which creates a free-rider political culture that sees no incentive or desire to develop real economic system or to create a strong political and civic infrastructure. In addition, the Jordanian governing political model is dependent on tribal alliances, military elites and predatory capitalists, a governing model that cannot sustain its long term existence.

From a logical point of view, meanwhile, the government efforts to undermine the MB should not make any sense because it is a fight that goes in the same direction that will eventually lead to undermine the Jordanian state itself,not just the MB as an entity.

But as it has done before, the Jordanian state’s strategy has always worked to undermine the development of social capital or strong political culture which in its view would constitute a threat to the benefactors of its current governing political model. In other words, the Jordanian governing model sees the short term interests of its governing elites over and above the long term existence of the country itself.

Ali Younes is the Editor of the Arab Daily News. He can be reached at: aliyounes@thearabdailynews.com, and on twitter @clearaliyounes