Arab News columnist Ray Hanania explores the ethical, legal and moral hypocrisies of Israel’s government’s efforts to evict non-Jews from their homes in the East Jerusalem neighborhood of Sheikh Jarrah.

In his column, Hanania argues that if Israel’s government asserts that homes and lands owned by Jews in the West Bank and East Jerusalem taken from them prior to the 1948 war should be returned to them, then surely the homes and lands owned by non-Jews in Israel prior to 1948 that were taken from them should be returned to them, too.

Israel is seeking to evict dozens of non-Jewish families from homes that Jewish organizations assert were owned by Jews whose ownership has been given to them. The Israel Supreme Court, the cornerstone of Apartheid racism, has refused to recognize the rights of the non-Jews living in those homes saying only that the properties belong to Jews and that the non-Jews should pay the Jewish organizations rent to live in them, at least for now.

The court adjourned without taking any definitive action in a large part because of the intense news media focus from he Arab World on Israel’s abusive policies in Sheikh Jarrah. Israel Defense Force soldiers have been used to evict some of the non-Jewish homeowners and protesters seeking to defend non-Jewish rights have been assaulted, injured and even killed by IDF soldiers and racist settler goons. 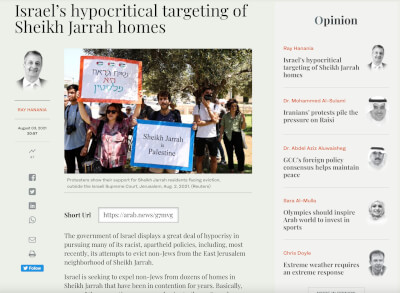