David Von Drehle began The Washington Post Global Opinion piece stating “Hollywood loves heroic journalists” then contended, “The case of Khashoggi should be an object lesson for every young person contemplating a journalism career. A reporter has no powers or privileges beyond those of every free human being; indeed, if you intend to do it right and play straight with the facts, you will have less latitude than those who feel free to spin and lie.”

Von Drehle concluded:
“Somewhere between caped superheroes and enemies of the people are the ordinary human beings who try their imperfect best to find and tell the truth to an audience that doesn’t always want to hear it. We have only the powers to question, to learn and to bear witness — though it might not change anything…”

On 1 October 2019, Vanunu tweeted: Oct’ 2019:Born to be Free!this is me in oct’2019 waiting for my freedom ,the 34 years since the kidnapping in 1986 started now,and they did not end this case yet.the stupid spy continue to play their games and cheating other stupid spy,Born to be free for ever.Freedom must come!. 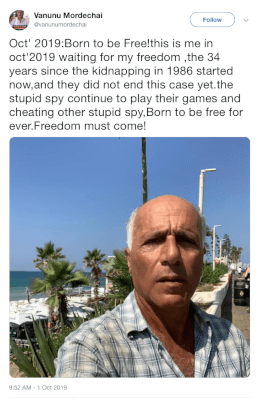 This American’s childhood dream was to be a reporter and it came true while I was in Jerusalem in 2005 after a serendipitous encounter with nuclear whistle blower Mordechai Vanunu; and so I commented as follows at the Washington Post

“Somewhere between caped superheroes and enemies of the people are the ordinary human beings who try their imperfect best to find and tell the truth to an audience that doesn’t always want to hear it” and this once upon a time comfortably numb American is a case in point!

The events of 9/11 was the catalyst and because The Media was NOT asking my questions I began to research and travel to the Middle East where I realized my childhood dream of being a reporter.

It happened in June 2005 after a sertendipitous encounter in Jerusalem with Israeli nuclear whistle blower Mordechai Vanunu who had been released from 18 years behind bars the year prior under restrictions NOT to speak to foreigners.

Vanunu told me stories beginning with his childhood and concluded with:

“Nixon stopped the inspections and agreed to ignore the situation. As a result, Israel increased production. In 1986, there were over two hundred bombs. Today, they may have enough plutonium for ten bombs a year…”
https://www.amazon.com/Eileen-Fleming/e/B00IZA7460/ref=dp_byline_cont_ebooks_1

I also wrote a screenplay based on my experiences, interviews and research regarding Vanunu and Israel’s nuclear facility at Dimona tilted “This American and Israel’s Nuclear Whistleblower VANUNU Mordechai” which was entered—and then featured by LA Festival Feature Script:

Have the Lebanese weathered the storm just in time? Arab World