UN independent experts have called on Israel to immediately release Salah Hammouri, an arbitrarily detained French-Palestinian human rights defender and lawyer, who has just ended a 19 day hunger strike in objection to the systematic policy of administrative detention.

“We are concerned by Israel’s pervasive misuse of administrative and criminal law proceedings and use of secret information against Palestinians, including human rights defenders such as Mr. Hammouri. This is a deliberate measure designed to silence human rights defenders, which has a profound chilling effect on all Palestinian and Israeli civil society actors,” said the experts.

“The detention practices Mr. Hammouri is being subjected to are not just unlawful: they are sadistic.”

The experts said Israeli authorities have targeted Mr. Hammouri during the past 20 years with harassment, arbitrary arrest and detention, and other forms of abuse. Acts of retaliation against him intensified after he became a human rights defender and lawyer defending and advocating for prisoners’ rights with Addameer Prisoner Support and Human Rights Association, one of the six Palestinian civil society organisations that Israel has designated as “terrorist”. Most recently, he has been placed under administrative detention since 7 March 2022, without charge or trial, based on “secret information”. 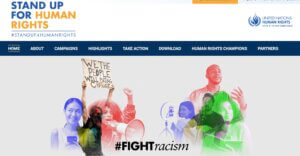 Mr. Hammouri, as a French citizen, had appealed on 14 July to French President Emmanuel Macron to apply pressure on Israel to end his arbitrary detention. Following his appeal, Israeli authorities reportedly classified him as “a prisoner of high risk” and forcibly transferred him to a high security prison in Hadarim in the Sharon region of central Israel; a transfer journey that involved inhumane treatment, according to Mr. Hammouri’s testimony.

“France should not turn a blind eye to these unacceptable acts of retaliation and reprisal against a French citizen and his administrative detention, which is arguably an arbitrary form of detention per se,” said the experts, noting that Mr. Hammouri’s previous administrative detention in 2018 was found to be arbitrary by the Working Group on Arbitrary Detention. They urged France to exercise all possible diplomatic and other efforts to ensure Mr. Hammouri’s release.

According to the latest information, the Israeli authorities placed Mr. Hammouri in abysmal and inhumane conditions, as punishment for having started a hunger strike together with other 29 detainees under administrative detention without charges. He was reportedly detained in a filthy and pest-infested isolation cell of four-square meters in Hadarim prison, without open air or light for 15 days, and deprived of any contact with the outside world. According to his defense, he was subject to pressure by Israeli prison officials, telling him that if he would leave his hometown Jerusalem and go to France this harassment would end.

The experts also noted that Mr. Hammouri’s permanent residency in Jerusalem had been revoked last year, based on “secret information” and allegations of his involvement in “terrorist activities” and “breach of allegiance to the Israeli State”.

“Israel’s acts of forcibly deporting protected persons from the occupied territory and forcing their allegiance to the occupying power, would constitute grave breaches of international humanitarian law, and may amount to a war crime: it is about time such widespread practices are investigated by the International Criminal Court.”

The experts have called on Israel to immediately and unconditionally release Mr. Hammouri and other detainees under administrative detention, and to maintain Mr. Hammouri’s permanent residency in his hometown, Jerusalem, where he has the right to live freely with his family.

The experts note with concern that according to the latest official figures of the Israeli Prison Service, Israel is holding 798 persons in administrative detention without charges – the highest number in over a decade.

The experts have not received any response from the Government of Israel to concerns expressed in 2020, 2021and 2022.

WalletHub lists Most and Least Diverse cities in America Culture