Arab political leader Raja Eghbaria was released to house arrest this afternoon, Monday, 15 October 2018, after the Haifa Magistrates’ Court denied the Israeli police’s request to keep him in detention until the conclusion of court proceedings against him.

Eghbaria, a member of the High Follow-Up Committee for Palestinian Arab citizens of Israel and leader of the Abnaa al-Balad political movement was released to house arrest after more than a month in jail under terms that ban him from using the internet and telephone. He is also required to post a 10,000 shekel bond.

Israeli police arrested Eghbaria on 11 September 2018 and interrogated him for seven hours about Facebook status updates that he posted over the past 12 months. He was kept in jail on suspicion of online incitement to violence and support of a terror organization.

The court accepted the defense team’s position that the police’s delay in arresting Eghbaria – months after he published the concerned Facebook posts and the commencement of their investigation – confirms that he does not pose a threat justifying actual detention.

“We have proven to the court that there is no legal basis for keeping Eghbaria in jail until his trial is over. The indictment itself is faulty due to proven problems with the state’s Hebrew translation of the Facebook posts that alter their wording from the original Arabic. We further proved that none of our client’s Facebook posts actually included any call to violence. So there isn’t really evidence against him justifying an indictment.”

Jabareen also emphasized the blatant discrimination between Palestinian and Jewish citizens of Israel in such cases, and said the defense team will raise this point in upcoming hearings.

Jabareen was referring to discrimination that was revealed during an earlier hearing on Eghbaria’s detention in which the Israeli prosecutor informed the court that the state has only ever sought detention until the end of court proceedings for Arab suspects in online incitement to terror cases – but never for Jewish suspects. 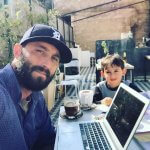