Mordechai Vanunu Israeli Nuclear Whistle Blower announced at Twitter on Tuesday that his July 4th indictment will continue on 22 December: 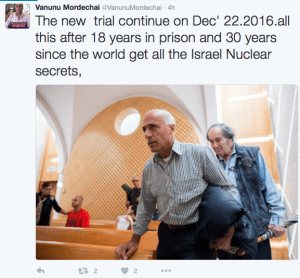 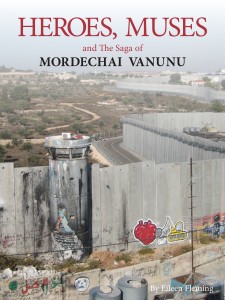 In my 6th book, Heroes, Muses and the Saga of Mordechai Vanunu, I wrote:

In my third book, I wrote in reference to my first interview with Mordechai Vanunu, Israel’s nuclear Whistle Blower:

“THIS is why you should never meet your heroes; they can be jerks like anyone else!”

As Bob Dylan sang, “I’ve already confessed – no need to confess again” so to learn why I wrote that ten years ago you will have to read, “BEYOND NUCLEAR: Mordechai Vanunu’s FREEDOM of SPEECH Trial and My Life as a Muckraker 2005-2010” available at KINDLE.

I began documenting the saga of Mordechai Vanunu during that meeting and the stories he told me about his childhood through 18 years in prison, crisis of faith and from my being electronically present to his crisis of identity at the culmination of his under reported freedom of speech trial are also included in that book………

In mythology, the Muses were nine goddesses who symbolized the arts and sciences. The story goes that the Muses were the daughter of Zeus the God of the Sky and Mnemosyne the personification of memory.
If you muse about something, you’re giving it serious thought and you may muse on certain ideas for years………

Hi. You can continue to act and do for my freedom as much as you can-no one can stop you. Freedom NOW!!! vmjc.

On 9 January 2014, the British based New Statesman, published an article by Mehdi Hasan who asked:

“The left lionizes Edward Snowden, but who will speak up for Israel’s Mordechai Vanunu?”

Hasan also claimed Vanunu “has been ignored and forgotten.”

Forgotten never: because everything is on the Internet!

When I last saw Vanunu in November 2013, he told me a reporter from CNN had recently asked him for an interview but Vanunu told him:

No, everything is already on the Internet….

When Vanunu deactivated his Facebook and Causes connections in 2012, I became the lone Administrator of TNT/Telling Nuclear and Truths, and established the Facebook Wall: Free Mordechai Vanunu: Public Figure.

I saw Vanunu for the last time in November 2013; but I kept him and SECURITY informed of my actions and articles regarding Vanunu and Israel’s WMD via email.

I never received a reply from Vanunu nor did he contact me until 22 March 2015. In an email to a few of his friends and me, Vanunu wrote:

Mordechai Vanunu sued Yedioth Ahronoth [Israel’s largest newspaper by way of sales and circulation] over a front-page lead article it published in November 1999 [while Vanunu was in his 13th year behind bars for telling London’s SUNDAY TIMES everything he knew as a mid-level technician within Israel’s WMD Facility at Dimona.]

The article was never verified and neither the reporter nor Yedioth Ahronoth asked Vanunu for his response to the claim of the Shin Bet.

The reporter of the piece was Ben Yishai who admitted the information he received came from Ami Ayalon, a head of the Shin Bet security services who spread the story to a group of nearly a dozen journalists at the end of 1999.

Five months after that meeting Ben Yishai published the only article furthering the fabrication which coincided with Vanunu’s request for an early release from 18-years behind bars.

Not only was Vanunu denied an early release from prison, the restrictions denying him the right to leave Israel have been renewed annually with the latest to expire in May 2016.

In his March 22nd email, Vanunu explained that his Lawyer Avigdor Feldman and the Lawyer for the Newspaper agreed to reduce the amount Vanunu ‘owed’ to 10,000 USA dollars!

Vanunu also wrote, “So now I have to pay this amount before any future leaving Israel, any help from you are very welcome.”

I emailed Vanunu to ask permission to publish his email and he wrote back, “You can publish it with this indiegogo…

…..A brief background of a few unfortunate facts:

On 29 March 2015, Vanunu reactivated his Facebook and Causes connections and immediately deleted me as an Administrator.

Vanunu also blocked me from posting at Free Mordechai Vanunu at Facebook and he renamed TNT/Telling Nuclear Truths after himself, deleted my five years of work at the Cause which also destroyed his opportunity to reach the over 21,000 supporters with a new campaign…

A Look Back at the U.S.-Saudi Friendship Arab World