A hostage is understood to be a person taken by force to secure the taker’s demands; or one that is involuntarily controlled by an outside influence. 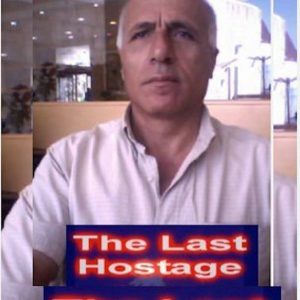 Mordechai Vanunu Israel’s Nuclear Whistleblower responded to Israel’s July 4 indictment against him by publishing the icon above at his Facebook, Twitter and YouTube Channels titled “The Last Hostage”

On 4 July 2016, Vanunu reported at Facebook that “after 30 years in Israel prison the new trial started today. From the big trial of exposing Israel Atomic weapons secrets to new charges about moving apartment without reporting, for meeting foreigners, and for speaking to Israel media about Dimona Nuclear secrets. So the trial started and will continue in next months.”

On 27 July 2016, MSN.com ran a five-page spread titled “Notorious kidnappings and how they ended” and published this text:

Israeli whistleblower Mordechai Vanunu was abducted by Mossad agents in Rome in 1986. Vanunu, who worked as a nuclear technician at Israel’s secret nuclear weapons facility at Dimona from 1976 to 1985, was in Britain at the time, exposing the country’s nuclear capabilities.

Mossad wanted him captured on espionage charges, but didn’t want a confrontation with British intelligence or harm their country’s relation with Margaret Thatcher.

Thus, the officials lured Vanunu out of Britain and into Rome where he was kidnapped, drugged and smuggled out to Israel. Vanunu served an 18-year sentence after his conviction.

This reporter submitted the following response to MSN via their FEEDBACK page:

Regarding article “Notorious kidnappings and how they ended” and Mordechai Vanunu who indeed was kidnapped by Mossad in 1986 and released from jail in 2004.

However the Vanunu saga has continued is documented in “Beyond Nuclear: Mordechai Vanunu’s FREEDOM of SPEECH Trial and My Life as a Muckraker 2005-2010” and in the 2015 release of “Heroes, Muses and The Saga of Mordechai Vanunu”
Will MSN report on Vanunu’s 12 yr HUMAN RIGHTS struggle to leave Israel?

NO RESPONSE yet from MSN.com

Instead of contacting Mordechai Vanunu for his side of the story [Vanunu’s email, snail mail and phone number were published on his site at that time] the NBC reporters repeated the “fact” that the reason Israel’s “honey trap” worked to lure the nuclear technician from London to Rome, was because “he expected an assignation with a woman”.

In 2006, after this reporter had run out of tape -but not questions- in the interview known as “30 Minutes with Vanunu” which was taped a few weeks after Vanunu’s Freedom of Speech Trial began, I asked Vanunu what was he thinking when he flew from London to Rome with who he thought was an American beautician on holiday.

Vanunu looked me in the eye and readily replied:

It wasn’t like THAT-when Maxwell’s paper published my photo without ever talking to me and some of the stolen Dimona photos with a very bad story against me, I knew the Mossad was after me. Cindy said she had a sister in Rome and I thought I would be safe there until I could return to London.

We went to movies and art galleries, I trusted her. But, as soon as I got into the apartment, I was hit on the head and drugged. When I woke up and they took me for interrogation, they threw the Times article on the table and said, ‘Look, what you did.’

What Vanunu did was shoot two rolls of film from Top Secret locations within Israel’s 7-story underground WMD facility at Dimona.

What London’s Sunday Times did was publish a front-page photo of the Dimona reactor and a story that spread over three pages revealing Israel’s arsenal of upwards of 200 nuclear warheads on Oct. 5, 1986-five days after the Mossad kidnapped Vanunu. 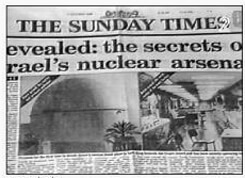 While Cheryl deceived Vanunu with a Judas Kiss, she was also deceiving her sister-in-law Cindy, whose Passport and identity she was traveling under.

Cheryl grew up in Pennsylvania and Orlando in a Jewish family that owed its affluence to tires. I moved to Orlando in the mid 1970’s and still can recall her father, Stanley Hanin, the founder and pitchman for the Allied Discount Tires chain stores, self-produced cheesy TV commercials with the refrain, “Tires ain’t pretty, but you gotta have them!”

As her parents went through an acrimonious divorce, Cheryl embarked upon a long love affair with the Zionist State. In 1977, she spent a semester in Israel, studied Hebrew and Jewish history and threw herself into her academic and religious studies in a three-month residential course funded by the World Zionist Organization.

In 1985, Cheryl Hanin married Ofer Ben Tov, six years her senior and soon after she attracted the attention of the Mossad.

In 1996, The St. Petersburg Times reported that Cheryl continues to work for the Mossad.

It is illegal under American-Israeli diplomatic protocols for the Mossad to operate in America.

Beginning in 1951, the Mossad has ranked as one of the world’s most skilled and lethal intelligence agencies.

Gordon Thomas wrote in Gideon’s Spies: The Secret History of the Mossad, “that Cheryl was sent on practice missions – breaking into an occupied hotel room, stealing documents from an office…She was roused from her bed in the dead of night and dispatched on more exercises: picking up a tourist in a nightclub, then disengaging herself outside his hotel. Every move she made was observed by her tutors.”

Mordechai Vanunu was hired as a technician trainee in 1976 and began a crash course in nuclear physics. All employees were required to sign the Official Secrets Act, which forbid disclosure of sensitive material. Because he was a good worker, Vanunu was cross-trained in many areas and spent nine years on the night shift at the center.

In the daytime, Vanunu graduated with a degree in Philosophy and Geography at Ben-Gurion University, where he also became active in politics and supported Palestinian human rights causes. Vanunu was repeatedly warned by officials at Dimona to halt his political activities, but he ignored them.

In 1985, Vanunu was told he would be transferred or laid off, instead he quit after photographing models of different types of bombs from Top Secret locations after a supervisor carelessly left the keys in the shower room.

After a few intense hours and nearly being caught, Vanunu returned the keys and stashed the film and camera back in his locker. A few days later he smuggled out the film and then the camera in his backpack, which was checked by Dimona Security both before entering and departing the nuclear facility.

Vanunu quit the Dimona in October 1985 and left Israel in early 1986 with the still undeveloped film. He traveled through Europe and wound up in Sydney, Australia, where he worked as a taxi driver and began to attend a social justice Anglican Church. Vanunu was born into an Orthodox Zionist home, but had become an atheist in early adolescence. The welcoming he received from parishioners who were already engaged in the struggle to get the Church to oppose nuclear weapons opened Vanunu up to tell his story about Israel’s WMD Facility at Dimona.

Among Vanunu’s new friends was Oscar Guerrero, a flamboyant Colombian who had been painting the church. Guerrero, realizing an expose of Israel’s nuclear program could be a gold mine, told Vanunu he was an “international journalist” who could help get the story published. At the Colombian’s urging, Vanunu developed his film, and Guerrero shopped the story to news organizations. All rejected him until he approached London’s Sunday Times in August 1986. Investigative reporter, Peter Hounam was assigned to determine if Vanunu’s story was credible.

Guerrero was dismissed but Hounam traveled to Australia to interview Vanunu who described a far more extensive weapons production program than anyone had imagined. Hounam wrote, “These were weapons that could obliterate a major city – they had no sensible battlefield application. I was utterly absorbed in the wealth of detail he was able to supply.”

The Sunday Times would not and did not pay for any information, but they did offer Vanunu $100,000 for a book deal and serialization in a German magazine.

However Vanunu never had a chance to sign that contract before being kidnapped by Mossad.

On 5 October 1986, London’s Sunday Times ran a front-page photo of the Dimona reactor and a three-page spread revealing Israel had an arsenal of 200 nuclear warheads. Israel did not deny the story and refused to say anything about Vanunu.

The Press was denied access to Vanunu, but he reached them without speaking a sound!

Vanunu’s inspired move was then caught on film as he pressed his palm to the car window and Hounam was able to piece together the story of Vanunu’s kidnapping which led to a confrontation with Ben Tov who had purchased the business-class tickets on British Airways Flight 504 flight to Rome.

Vanunu told this reporter that the moment he entered the apartment he was hit and pinned to the ground, drugged, clubbed, bound and flung onto a small yacht or a disguised Israeli navy ship.

Vanunu endured a closed-door trial and was denied the right to speak in his own defense. His lawyer argued he didn’t commit treason because he did not share information with a hostile foreign government but went to The Media in a case of the public’s right to know.

Hounam tracked Ben Tov to Netanya, a city on Israel’s Mediterranean coast and asked her if she was Cindy?

“I deny it, I deny everything,” she shouted as Hounam snapped a few photos of her. By that night, the house was deserted.

In 1997, another Sunday Times reporter found Cheryl Hanin Ben Tov back in Orlando, living in a secluded villa. Her only concern was that any story about her should not “harm her position in America.”

According to the paper, the Ben Tov’s also had a villa in Israel in an area that is home to many security officials.

Cheryl “continues to work for Mossad, according to her Israeli neighbors” the Sunday Times said. She and her husband, they believe “have rented out their house, while she is engaged in an overseas assignment, and are expected some day to return.”

Florida state records had also once showed Cheryl “had an active real estate sales license and was employed by CFI Sales & Marketing of Orlando.”
However CFI, whose Westgate Resorts is one of the world’s largest timeshare companies, said Ben Tov was terminated in 1997, the same year the Sunday Times found her in Orlando.

After the St. Petersburg Times began looking into Hanin’s background, state records were changed to show her license as inactive and without any reference to CFI.

Officials could not say who requested the change. CFI says it did not.

It is illegal under American-Israeli diplomatic protocols for the Mossad to operate in America, but it does not make it impossible.

What could is a Media that investigates for the public’s right to know instead of being controlled by an outside influence.

Eileen Fleming can be contacted HERE

The Hypocrisy of the anti-Trump haters American Arabs