At noon on June 8 at the Volusia County Administration Center the second annual USS Liberty Remembrance Day Petition Drive precedes a screening of the BBC film “Dead in the Water” at 6 PM.

At 7:30, Author and USS LIBERTY survivor, Ernest Gallo will command the stage and “tell you the truth”

In May 2010, this reporter attended one of Gallo’s talks and he delivered on his promised intention:

My intent is to tell you the truth and if I do a good job, you will leave here tonight with heart burn.

He did and I did!

Some of the Liberty survivors think the Lord wants us to tell this story.

My focus is on our government, who abandoned the crew when Israel targeted the USS Liberty and murdered 34 servicemen and injured 174 on June 8, 1967. Ever since, we have been chastised and dishonored by our government. 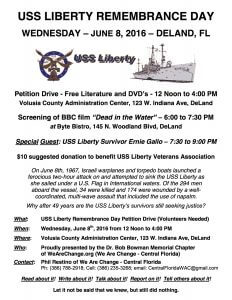 Gallo is still waiting for a reply to his following Letter:

In 1943 the Germans discovered mass graves of some 22,000 Polish nationals in the Katyn Forest of Russia near the border with Poland.  Although Stalin claimed that the victims had been murdered by the Nazis in 1941, President Roosevelt and Prime Minister Churchill knew that the Russians were responsible.  In 1990, fifty years after the massacre, Mikhail Gorbachev acknowledged and condemned the perpetration of the killings by the Soviet Secret Police (NKVD), as well as the subsequent cover-up by the Soviet government.

On June 8, 1967, Israeli air and naval forces attacked USS LIBERTY (AGTR-5) killing 32 Americans and wounding 171 others.  While the Israeli and U.S. governments reported that the attack was “the result of an error,” indisputable evidence exists to prove that the attack was intentional and that both governments have been engaged in a cover up now for almost 50 years.

The most tragic part of this cover up has been the tremendous harm that has been done to the survivors and families of the dead and surviving crew members.  No monetary compensation can heal the pain and suffering we have endured.  The Congressional Medal of Honor unceremoniously bestowed upon the Commanding Officer in the Navy Yard, along with the 2 Navy Crosses, 12 Silver Stars, 20 Bronze Stars, 9 Navy Commendation Medals, 208 Purple Heart Medals, and 294 Combat Action Ribbons awarded to the crew are meaningless to most of us survivors who were told we could not discuss the war crime we suffered less we face court martial or imprisonment.  Considering the intensity and duration of the air and sea attacks that left the Liberty drenched in blood with a forty square foot hole in her hull and smoking from napalm that incinerated anything and anyone topside, it’s a miracle that any of us survived.

When the late Admiral Thomas Moorer who served as Chairman of the Joint Chiefs of Staff (1970-1974) presented findings in 2003 that proved that the attack was not an accident and Congress chose not act upon the war crimes evidence, he could only conclude: “A danger to our national security exists whenever our elected officials are willing to subordinate American interests to those of any foreign nation.”

In April of 2010, President Vladamir Putin invited his Polish counterpart, Prime Minister Donald Tusk, to attend a Katyn Memorial Service commemorating the 1940 massacre.  On behalf of the Liberty Veterans Association, I am writing to request that you invite Prime Minister Benjamin Netanyahu to attend a Memorial Service in Arlington National Cemetery at noon on June 8, 2016 commemorating the 1967 attack. We believe the time for confessing, forgiving, and healing is long overdue.

Thank you for your kind consideration given to our request.

Tipping and Bargaining in Egypt: Bakhshesh or Sadaqa Abdennour Toumi