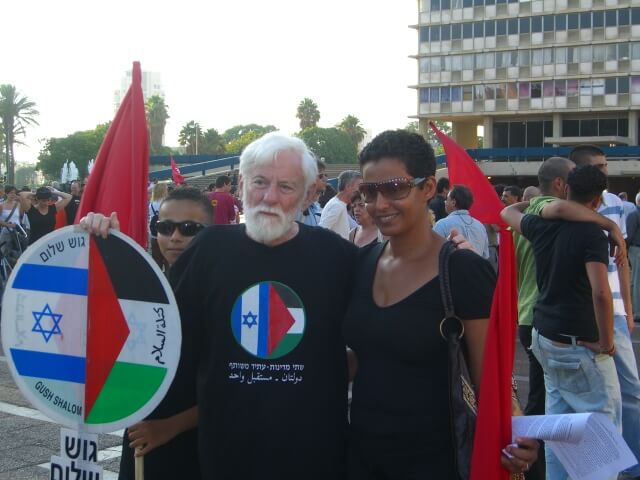 Uri Avnery was an Israeli who fought for peace and justice, defending the rights of Jews and non-Jews in Israel, in the occupied territories and who advocated for a peaceful, just settlement of the Palestinian-Israeli conflict in his writings. Avnery died early on Monday August 20, 2018 after collapsing while preparing to attend the massive public peace rally at Rabin Square to oppose the racist “Nation State” law

Uri Avnery, a longtime Israeli Jewish peace activist and the founder of Gush-Shalom, the peace movement in Israel, died on Sunday August 20, 2018. Avnery was taken to a hospital last week after collapsing during the massive pro-peace rally in Rabin Square protesting against the racist “Nation State” law.

Avnery was originally a teenage member of the Jewish terrorist organization, the Irgun Tzvi Leuhmi, which was founded by terrorist killer Menachem Begin, an immigrant from Poland who orchestrated the killings of hundreds of Arabs and British soldiers in Palestine during and after World War II. Begin later became an Israeli Prime Minister who negotiated a peace agreement with Egypt to thwart peace with the Palestinians, while Avnery distanced himself from his violent roots to embrace peace activism and reconciliation. Avnery broke with the Irgun in 1942 over their violent tactics.

Avnery was elected to the Israeli Knesset in the 1970s and 1980s and went on to become an accomplished writer and advocate for reconciliation and supported of the Two-State Solution, one Israel and one Palestine. 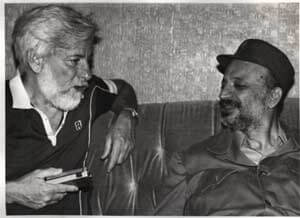 Uri Avnery with Yasser Arafat in 1982. Photo courtesy of Wikipedia.

Avnery was also the first Israeli to publcily meet with Yasser Arafat, the Palestinian hero who forced the world to recognize the rights of Palestinians and who sought a peace accord with Israel that was thwarted by political agendas promoted by the beleaguered American President Bill Clinton. Clinton, who tried to impose one-sided Israeli demands on Arafat, later falsely blamed Arafat for the failure of peace, a blame that was embraced by the racist, anti-Arab mainstream American news media that today continues to shield Israel from criticism of its brutal policies.

Avnery was also one of the loudest voices denouncing the Israeli government and military policy of using snipers to shoot and kill civilians who were protesting on the Palestinian side of the Gaza-Israel border.

Uri Avnery at a Hadash protest in Israel against the Lebanon war 2006. Photo courtesy of Wikipedia.

Gush Shalom grieves and mourns the passing of its founder, Uri Avnery. Until the last moment he continued the way he had traveled all his life. On Saturday, two weeks ago, he collapsed in his home when he was about to leave for the Rabin Square and attend a demonstration against the “Nation State Law”, a few hours after he wrote a sharp article against that law.

Avnery devoted himself entirely to the struggle to achieve peace between the State of Israel and the Palestinian people in their independent state, as well as between Israel and the Arab and Muslim World. He did not get to the end of the road, did not live to see peace come about. We – the members of Gush Shalom as well as very many other people who were directly and indirectly influenced by him – will continue his mission and honor his memory.

On the day of the passing of Uri Avnery, the most rightwing government in the history of Israel is engaged in negotiations with Hamas. Ironically, the same demagoguery accusations which were hurled at Uri Avnery throughout his life are now made against Defense Minister Avigdor Lieberman.

In the history of the State of Israel, Uri Avnery will be inscribed as a far-seeing visionary who pointed to a way which others failed to see. It is the fate and future of the State of Israel to reach peace with its neighbors and to integrate into the geographical and political region in which it is located. Avnery’s greatest opponents will ultimately have to follow in his footsteps – because the State of Israel has no other real choice.

(Ray Hanania is an award winning former Chicago City Hall reporter, and syndicated columnist with the ArabNews.com. Email him at rghanania@gmail.com.)