CNN‘s Chris Cuomo said, “That Israel has an active nuclear program…seems to me the message is we know this already” during Tuesday’s interview with Prime Minister Benjamin Netanyahu.

The term ‘Freudian slip’ is a slip of the tongue in which a word that the speaker was subconsciously thinking about is substituted for the one that he or she meant to say.

At the 1.48 minute mark in the following video Chris Cuomo states, “That Israel has an active nuclear program…seems to me the message is we know this already.”

“Does Israel have nuclear capabilities and nuclear weapons, yes or no?”

Netanyahu repeated, “we’ve always been the first to say we wouldn’t introduce it so we haven’t introduced it.”

Cuomo pressed for a “yes or no answer,” and Netanyahu replied, “That’s as good an answer as you’re going to get.” 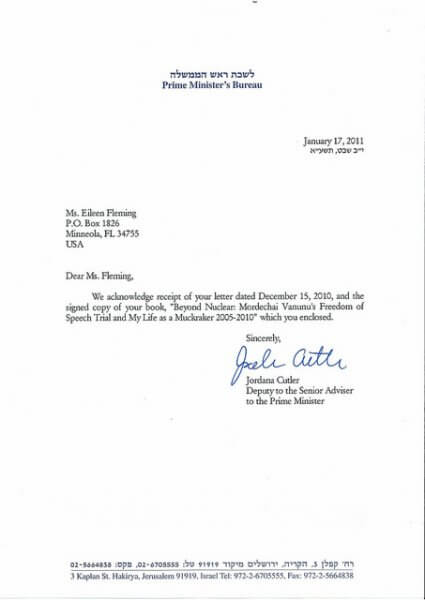 On Tuesday, this American emailed the following Letter to the Editor of The New York Times at 3:08 PM in response to their April 30 publication of “Israel Says Secret Files Detail Iran’s Nuclear Subterfuge”

As I read the “Ha, ha, ha,” from the University of Tehran professor who said that Israel had “fabricated evidence” before and might have again, I wondered again when will the media ask Mr. Netanyahu about Israel’s nuclear weapons and their whistle blower Mordechai Vanunu’s ongoing court battles seeking to end the restrictions that keep him in Israel, despite being freed from 18 years behind bars in 2004 and being granted asylum by Norway so that he can join his wife of three years.

In June 2005, I was in Jerusalem researching for my first historical fiction when a serendipitous encounter with Mordechai Vanunu led to a series of interviews and the realization of my childhood dream of being a reporter when Vanunu tells me:

Did you know that President Kennedy tried to stop Israel from building atomic weapons? In 1963, he forced Prime Minister Ben Guirion to admit the Dimona was not a textile plant, as the sign outside proclaimed, but a nuclear plant…When Johnson became president, he made an agreement with Israel that two senators would come every year to inspect. Before the senators would visit, the Israelis would build a wall to block the underground elevators and stairways. From 1963 to ’69, the senators came, but they never knew about the wall that hid the rest of the Dimona from them. Nixon stopped the inspections and agreed to ignore the situation.

Thank you for any consideration,

Even Israeli terrorism is not justification for Palestinian violence American Arabs