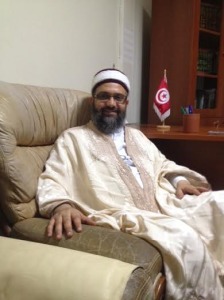 Speaking to Sheikh Farid al Baji on the eve of the Parliamentary elections in Tunisia due to take place this coming Sunday was full of surprises. Al Baji, 46, who spoke to me at his office in the Tunisian capital, Tunis, is outspoken and is perceived as controversial about his political positions on Islamic law, and on political Islam. He told me with a big smile on his face  that “Terrorism is the biggest problem facing Arab and Muslim societies today and in order to combat it, Muslims should stand united against Political Islam.” He also heads an anti- terrorism center in cooperation and affiliation withe Tunisian law enforcement agencies and is very proud about that. He sees his efforts in this direction as his religious and patriotic duty toward his country.

The Shaikh;s work can only be understood in the contest of political Islam that has been sweeping the region and is a very sensitive topic in Tunisia since Islamist party Ennahda is poised to win big in the upcoming elections this Sunday.

Ennahda has a majority of seats in the current parliament and has formed the previous government with two other center left parties. Al Baji , however, has urged his followers to vote against Ennahda because he considers the group as a “ Salafist” organization at its core and that it supports and cooperate with terrorist Jihadist- salafist group in Tunisia called “ Ansar Al Sharia” or the supporters of Islamic law.

Al Baji who heads “ Dar al Hadith al Zaytouniya” an organization dedicated to the preservation and implementation of Prophetic tradition through the lenses of Tunisian Al Zaytounah university stands, doctrinally, in the opposite direction of the Islamic salafist traditions with all of its colors and diversity which include the Muslim brotherhood, Wahabist groups and terrorist organizations like ISIS or ISIL and in Tunisia, Ansar Al Sharia group. Al Baji commands large following among the Tunisian society especially those who oppose using Islamic ideology as their platform, and has made a lot of enemies as well as allies within and outside the Tunisian government.

While Ennahda which is headed by its long time leader, Rashid Ghannouchi , does not say that it seeks to implement Islamic law in Tunisia as the law of the land, but for al Baji, this is not enough. He claimed that the majority of the group supporters and its rank and file members are “extremist Salafists” and thus he warns against voting for it.

But Ennahda’s official Samir Diyalo denied such accusations to me during a meeting in his office last week, and said that his party is in line with the Tunisian Islamic culture that it emphasizes a moderate Islamic laws and tolerance towards others. He also accused al Baji of having his own agendas.

Al Baji, moreover, accuses all Wahabist organizations, Ennahda included of wanting to force Islamic law “The Sharia” on the Tunisian society, and that for him, these groups have bred terrorism and extremism in the Islamic and Arab world.

In his view, Sharia, or  an all encompassing Islamic law should not be a priority for the Tunisian Muslims and, given the current circumstances, in fact, it can be suspended indefinitely. “Tunisian national unity is more important than Sharia.” He told me at his office which is located in a poor section of the capital. As far as the penal code embedded within Islamic law which is stereotyped in the form decapitations and cutting off limbs especially in the current political environment, these laws should also be suspended.

“According to the Maliki legal doctrine, Islamic penal codes especially the ones that deal with capital punishment should be suspended for the betterment and cohesiveness of society.” he added that Islamic law cannot be even implemented in modern life, because, in doing so, it will ensure the destruction of Muslim societies.

As far as Jihad, Shiekh al Baji stated his opposition to the way other Islamic groups interpret the concept of Jihad and its implementation in modern Islamic societies. For him, Jihad is not a literalistic military concept, and it’s not about fighting, rather, is about calling onto others to accept Islam through morality and religious goodness.

His views on Jihad stands in sharp contrast to Wahabist and Salafist traditions which considers Jihad a purely military form and a religiously expansionist  tool to advance political agendas. Thus, al Baji considers many Islamic political traditions, as a harbingers of terrorism and violence.

Al Baji is vocal about his views and stresses that the Tunisian society is different than other Arab or Muslim societies because of its deep tradition in Islamic moderation, its Sufi traditions, tolerance and acceptance of others.

Ali Younes is the Editor of the Arab Daily News. He can be reached at : aliyounes@thearabdailynews.com, and on twitter @clearali