LifeRun Releases a Wireless Technology Medical Alert System that allows the user to speak and listen through a pendant, giving way for round-the-clock senior safety and supervision.

LifeRun’s new, innovative technology has come to light just in time for the vastly growing senior citizen population. We are here to speak with seniors and send help in the event of a fall, providing at home and around home assistance, or to just lend a hand in normal day-to-day tasks.

The interactive two-way wireless technology allows seniors to remain living independently in their own home rather than moving into an assisted living community or moving in with family members.

The medical alert system is a multi-facet emergency system that includes a talking wireless pendant that allows two-way communication with our 24/7 UL accredited emergency monitoring center.

Life Run Medical Alert Systems has released state of the art technology designed to protect senior citizens in their homes in the event of an emergency or any situation.

Contrary to other devices, which will always automatically send an ambulance when activated, regardless of the situation, LifeRun will allow you to automatically communicate with an associate and hear exactly what your need is. With LifeRun, it is as simple as pushing a button and speaking one on one with an associate who is there to listen to your concern, no matter how big or small. All this talking and listening is done through the tiny pendant.

Sometimes all a senior needs is to have a neighbor or family member come assist them with a chore or a task: not every need is a life threatening emergency. Depending on your state, the average cost of an ambulance ride can be $1,000, or more. 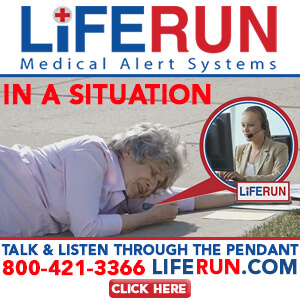 The full cost may not always be covered by your insurance, Medicare or Medicaid. That is what sets LifeRun apart from the average senior devices, which will send an ambulance right away. We take time to listen to your needs right through the pendant and will send an ambulance to your home if it is requested for a life threatening emergency and you require immediate assistance. With LifeRun, a simple, helping hand can be made possible with the touch of a button. Our device is small, easy to wear and comfortable. It is waterproof and can be worn as a necklace or wristband.

There is a small, base unit that easily connects to a traditional phone line (wall jack), or to a modem. When the pendant is pressed, it communicates directly to a certified emergency operator who monitors calls 24 hours a day. The great thing about LifeRun is that you can speak and listen through the little button, even from outdoors or in your own garden! LifeRun can help in ANY situation.

LifeRun Mobile also allows for security and assurance, regardless of where you are. With LifeRun Mobile, assistance can be provided anywhere you go, at the mall, in a grocery store or while you are enjoying a golf outing with friends, LifeRun is there all the way. When a person with a medical alert system falls unexpectedly or has an emergency, such as an adverse reaction to medications, burglary, fire, heart attack, seizures, severe dizziness, strokes, it may be nearly impossible to reach a phone.

With the simple push of a button, the pendant connects with the monitoring center and within minutes help arrives to their home. Most importantly, both emergency personnel and family are notified within seconds after the emergency occurs.

In addition, LifeRun is noted as one of the pioneers in home security by helping older citizens enjoy a renewed sense of independence while their children and loved ones find peace of mind with around the clock emergency monitoring.

The device is simple to use, as simple as 1, 2, 3. Press the button Tell us what you need Immediate assistance comes to you And of course if you can’t speak to us…just press your button and we send immediate medical help.

It’s as simple as that!

If you are unable to speak to us, just push the button on your LifeRun pendant and we will send immediate assistance. LifeRun Alert systems provides consultation, technical support and customer service. We keep 24/7 medical monitoring completely separate from our day to day business operations to ensure that all calls are rapidly responded to immediately.

If you have a medical emergency, please push your help button and a professionally-trained operator is there, instantly. Most importantly, proper and complete care of a loved one should only include the latest technology, such as a two-way, talking pendant, a service that is not featured on your average medical alert systems.

Your loved one should be able to speak directly to assistance with the simple push of a button, no matter where they are, in and around their home or their backyard. If your medical alert system does not do that for you, you need to make LifeRun your choice.