On Tuesday Jane Fonda wrote at her official site

We were told there were as many as 750,000 people. It felt like it. I can’t prove it but when I stood on the stage to speak there were masses of people as far as the eye could see and that didn’t even include the masses who filled all the side streets and were out of sight. It was awesome to be among so many people, all supporting each other, no pushing or negativity and the signs and banners were diving and original. Don’t let anyone write this off as some liberal elite event. There were significant marches in all 50 states, and on every continent! Millions came together in peace, and pledging solidarity….

As of this writing Jane Fonda concluded the thread in capital letters:

WHEN IT COMES TO STOPPING THE NORTH DAKOTA PIPELINE WHICH THIS PRESIDENT JUST ISSUED AN EXECUTIVE ORDER TO MOVE AHEAD ON IMMEDIATELY (AS HE ALSO DID FOR THE KEYSTONE XL PIPELINE) THE BEST THING IS TO GO TO #BANKEXIT AND DEFUNDDAPL.ORG. BUT KEEP MARCHING AND PROTESTING AND STAY IN TOUCH. XX 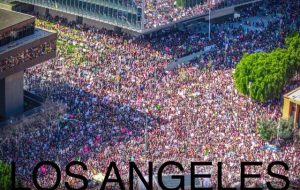 A reporter in the Oval Office asked, “Mr. Trump, any comment to the Standing Rock community and the protesters out there?”

Mr. Trump put his head down, puckered up his lips and looked in the opposite direction.

Mr. Trump then responded to a question about when he expected to make a Supreme Court nomination.

The protests at Standing Rock united Americans of many ethniticities with members of 200 tribes from across the U.S. and Canada who are united against the $3.8 billion pipeline’s construction route.

Standing Rock will define the Era of Trump

What side of history are you standing on?

US Veterans to Deploy to Standing Rock

What Arab Americans Need to Know about Standing Rock

THIS AMERICAN is a work in progress