The Combatting BDS Act of 2016 seeks to encourage and authorize state legislation to divest state funds from companies that boycott Israel.

On Tuesday in Colorado human rights activists seized their First Amendment rights to enlighten their elected officials regarding Israel and the BDS/Boycott, Divestment and Sanctions movement.

In 2005 Palestinian civil society called on the international community to use the tools of economic pressure to hold Israel accountable for their obligations under international law, to end the military occupation of the indigenous Palestinians, for full equality for Palestinians citizens of Israel and the right of return for refugees.

Modeled on the global solidarity movement to end apartheid in South Africa, BDS’ intent is to leverage grassroots power to put pressure on governments and corporations that uphold an unjust political system. The right to boycott is a constitutionally protected form of political speech with a legacy of bringing about social change.

On March 16, 2015, PM Netanyahu said there will be no Palestinian state on his watch.

The purpose of BDS is to pressure the current Israeli government to become a good neighbor in the Arab World by ending its denial of basic civil rights and inalienable human rights to its non-Jewish residents. 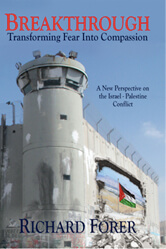 Among the concerned Americans who addressed the Colorado State Legislature regarding the anti-BDS bill, was author Richard Forer.

In 2006, Richard experienced a crisis of identity and a profound spiritual awakening which he details in Breakthrough: Transforming Fear into Compassion – A New Perspective on the Israel-Palestine Conflict.

A former member of AIPAC (American-Israel Public Affairs Committee) with relatives living in Jewish-only settlements in the West Bank, Forer journeyed to the West Bank of Palestine in 2010 and 2012 and to Gaza in 2012.

In his speaking engagements Richard addresses the deepest roots of suffering and conflict and the subconscious thought patterns that lead good people who believe in justice to support indecency and injustice.

On February 23, 2016, Richard Forer testified before the Colorado state legislature regarding the proposed pro-Zionist and anti-BDS bill, HB 1284 stating:

My name is Richard Forer and I am the author of Breakthrough: Transforming Fear into Compassion –A New Perspective on the Israel-Palestine Conflict.

Growing up on the east coast, from ages five to fourteen I attended religious services weekly as well as Saturday and Sunday school and spent my summers at the Jewish Community Center. I am a former member of AIPAC and have orthodox relatives living in settlements in the West Bank.

For 45 years, my identical twin has been a member of a Hasidic sect of Judaism that believes the Arab population must be ethnically cleansed.

Their ranks include members of the Knesset, the Israeli cabinet and rabbis that wield tremendous influence over all of Israeli society.

Until 2006 I assumed, along with virtually every Jew I grew up with, that Israel had always wanted to make peace with the Palestinians but the Palestinians were so irrational they were willing to sacrifice their own people in order to push the Jews into the sea.
A series of circumstances compelled me to begin an investigation into the history of Israel-Palestine.

For the past decade I have studied the history daily with an emphasis on Israeli state and Central Zionist archives, reports of Israeli ministries of Defense and Internal Security and the writings of Israel’s prime ministers and chiefs of staff.

I learned that there is not a single argument, and I know them all, I ever made or heard in defense of Israel that was not factually inaccurate or taken out of context in order to blame the Palestinians and vindicate the Israelis.

I discovered that all my life I had closed my heart to the cries of the Palestinian people.

These human beings were suffering profoundly from my ignorance.

BDS does not seek to harm Israel. It seeks to prevent Israel from harming Palestinians.

Calling on Israel to comply with international law is not anti-Semitic.

Nor is compassion for the unnecessary suffering of the Palestinian people. If it were, all Palestinians would, ipso facto, be anti-Semites.

Jews are chosen to rectify injustice and bring blessing to the world.

This is how the world is made into a dwelling place for the Divine.

Defending injustice perverts the very nature of Judaism and delegitimizes the Jewish state.

The truth is that with its cruel and inhumane occupation, no one incites anti-Semitism more effectively than Israel.

BDS’s goal is to transform this inhumanity into basic rights for all people, not some people.

A vote to suppress free speech, especially speech intended to end inhumanity, is a vote for endless turbulence not just in Israel but throughout the region.

I am willing to share with anyone my knowledge and my insights into how we humans create a world of suffering for ourselves and for those whose humanity we so carelessly deny.

Richard Forer can be contacted through his website HERE. 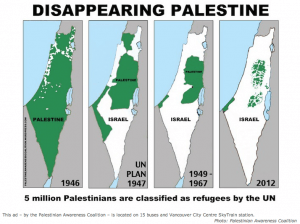 What American’s need to know:

Israel is a signatory to the Fourth Geneva Convention, which explicitly prohibits an occupying power from transferring “parts of its own population into the territories it occupies.”

It has been more than 20 years since the Oslo Accords. “Bilateral negotiations” have proven not to be a solution. Israel has used these years to seize more Palestinian land, doubling the number of settlers in the West Bank.

The state has no right to tell companies who they can or cannot do business with.

Legislation against BDS violates the right to free speech and that is unconstitutional!