Edward Stack, the 63-year-old chief executive of Dick’s Sporting Goods makes it clear that the company’s new gun policy was a direct response to the Parkland Florida shooting.

After reading Edward W. Stack, Chairman & CEO of DICK’S Sporting Goods Media Statement, this American visited her local Dick’s -for the first time. I spent some money and will return when ever I need to shop for my family of hunters, fishermen and athletes.

There were lots of guns but no AR-15’s. The young salesman told me there had never been any AR-15’s on the shelf of that store.

He and a customer who stood nearby told me they were members of the NRA but neither would speak on or off the record.

My husband is a lifetime member of the NRA, has hunted turkey and deer since adolescence, and owns rifles and a handgun that he keeps locked behind two doors.

My husband agrees that NOBODY needs an AR-15 or any military weapon of mass destruction.

We have grandchildren who attend a Florida public school in an affluent neighborhood.

For the first time in my life, I watched CNN for three hours straight the evening they broadcast the Parkland Town Hall. 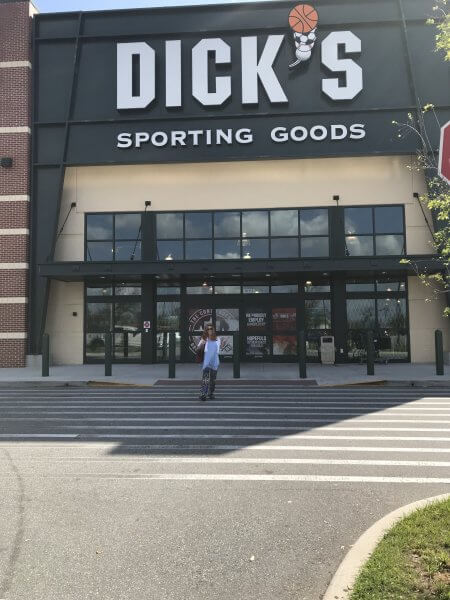 Listening to the students’ pleas energized me to do something beyond signing petitions to Senators Rubio and Nelson, and so it begins with publishing the complete:

We at DICK’S Sporting Goods are deeply disturbed and saddened by the tragic events in Parkland. Our thoughts and prayers are with all of the victims and their loved ones.

But thoughts and prayers are not enough.

We have tremendous respect and admiration for the students organizing and making their voices heard regarding gun violence in schools and elsewhere in our country.

We support and respect the Second Amendment, and we recognize and appreciate that the vast majority of gun owners in this country are responsible, law-abiding citizens. But we have to help solve the problem that’s in front of us. Gun violence is an epidemic that’s taking the lives of too many people, including the brightest hope for the future of America – our kids.

Following all of the rules and laws, we sold a shotgun to the Parkland shooter in November of 2017. It was not the gun, nor type of gun, he used in the shooting. But it could have been.

Clearly this indicates on so many levels that the systems in place are not effective to protect our kids and our citizens.

We believe it’s time to do something about it.

Beginning today, DICK’S Sporting Goods is committed to the following:

At the same time, we implore our elected officials to enact common sense gun reform and pass the following regulations:

We hope others join us in this effort to let our kids know that their pleas are being taken seriously.

Some will say these steps can’t guarantee tragedies like Parkland will never happen again. They may be correct – but if common sense reform is enacted and even one life is saved, it will have been worth it.

We deeply believe that this country’s most precious gift is our children. They are our future. We must keep them safe.