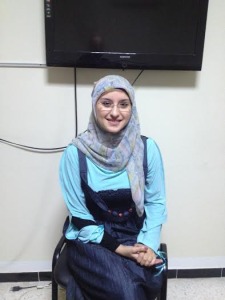 The Tunisian Parliamentary elections are entering its last day before Tunisians go to the polls to cast their votes in highly contested and very polarized elections. But for Dhauha Cherif, this election is a special one because she might be making history not only in Tunisia but also in the Arab World as the youngest female candidate for the seat in the parliament representing a reformist Islamist party.

The 26 years old Cherif is still working on her Master’s degree and very active in the political scene in Tunisia as the head of the Parliamentary list of “ Al Aman Party” which is closely associated with outspoken Shaikh Farid Al Baji who supports her party and strongly opposes the Islamist Ennahda party.

Cherif told me during an interview with her in the capital Tunis last week that her party, although small, is not just offering the citizens a chance of a protest vote against Ennahda and others, but rather a strategic alternative to it.

The young candidate and leader is a protégé of the charismatic religious scholar Al Baji who is urging his followers and other Tunisians, mostly the disenfranchised poor to vote for Al Aman party and to support “his student” candidacy as he describes her. While Cherif did not say that she is against political Islam like her mentor, al Baji, a term that have come to mean in the Arab world’s current political discourse as the Muslim Brotherhood, she is however casting herself and her party as an alternative form of political Islam. A softer and gentler form.

Tunisia’s problem today is not just with the Muslim brotherhood and its Tunisian version, Ennahda; it has to do, rather, more with the Salafist-Jihadist proliferation in the region which has destabilized Muslim societies across the entire Muslim world. Tunisians are worried that Salafist and Jihadist groups will wreak havoc in their country should Ennahda wins a majority in the parliament and thus enable such extremist groups of taking hold within the Tunisian polity.

The collapse of neighboring Libyan state and civil war between Islamists and their secularists’ opponents has heightened fears in Tunisia that an Islamist takeover of the country will bring about chaos and instability.

For Cherif, and Al Baji, Tunisia, is unlike Egypt or Libya or any other Arab or Muslim country in many ways, Cherif argues that the temperament and the sensibility of the Tunisian people is historically linked to a softer Islam that is traditionally sufi and that it emphasizes love and tolerance. Al Baji and his protégé Cherif, meanwhile, accuses Ennahda and its alleged allies in the Wahabist-salafist movements of trying to instill a harsh form of Islam that is alien to the Tunisian social and religious environment.“ We as Tunisians are tolerant and more moderate and open toward others and even to those who have no religion at all.” She said. In other words, the struggle in Tunisia is between the different traditions of Islam and is about who should represent the soul of Tunis with its different secular and religious traditions.

Ali Younes is the Editor of the Arab Daily News. He can be reached at : aliyounes@thearabdailynews.com, and on twitter @clearali