Aaron Hanania will sign copies of his new book at an event on Thursday, October 25, 2018, at the Oak Lawn Library from 6 pm until 8 pm, and discuss how young students can become better students through disciplined writing and storytelling.

A writing project that ended up in his first published novel has become the cornerstone of a suburban Chicagoland high school seniors’ campaign to encourage other students to see writing as a means to achieve their educational goals.

Hanania, 17, who this Fall began his senior year at Sandburg High school in suburban Chicago Orland Park, has maintained a straight A average since 5th Grade, in a large part, he says, because he recognized the importance of telling a story over the process of writing.

“Writing should be about telling a story, an accurate story when non-fiction and a compelling story when fiction. Too often we focus only on the mechanics of writing and that holds us back,” said Hanania, 17, whose father covered Chicago City Hall in the 1970s through the 1990s.

“My dad encouraged me to write in a journal using pen and paper rather than keyboards and technology. That helped me focus on the substance of the story I was writing rather than on the mechanics of the process of writing. I think young people spend too much time worrying about how to write rather than what to write, and instead of exploring their creative side end up struggling to write.”

Once you define the story and the content, the writing becomes easier and technology becomes an asset.

This past summer, Hanania penned two novels, one that he published earlier this year, a Science Fiction mystery thriller called “The King’s Pawn.” He wrote both of the manuscripts using his iPhone 6. 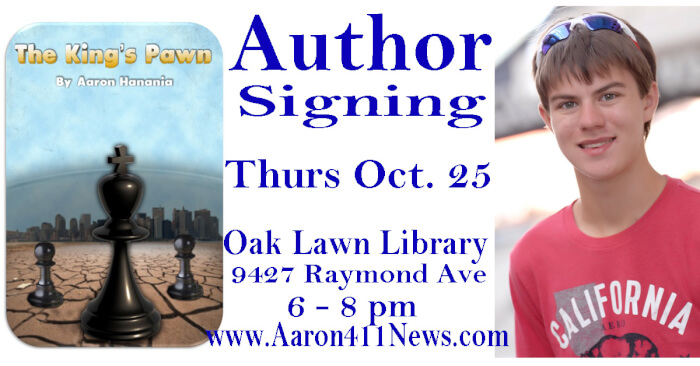 “The King’s Pawn” takes readers into a world in which the norms of human dignity and life breach the extremes of life.

A scientist creates a revolutionary experiment, The King’s Pawn, in which the participants are unaware of the roles that they play in what is expected to be a literally “perfect world.” The scientist soon discovers her “methodically controlled society” creates unforeseen tensions and ominous uncertainty for the unknowing participants, but brings the scientist unimaginable profits, fame and power.

But what the scientist doesn’t expect is that the power of human curiosity can overcome any barrier, experimental boundaries or expectations. Two children in “The King’s Pawn” play a critical role after discovering that they have unrestricted control over the experiment’s outcome.

The future of this unusual experiment rests in their hands, creating thrilling and unexpected consequences.

“Once I started writing and focused on the story content rather than on the structure, the story just poured out,” said the first-time novelist. “It forced me to read and reread the story over and over again as I went back and corrected grammar, typos, sentence structure.”

Hanania maintains a blog at www.Aaron411News.com and like many young people today also has a Youtube channel where he takes writing beyond the written word to a visual presentation at www.Aaron411.com.

Aaron is the son of award-winning Palestinian American columnist and author Ray Hanania.

Copies of the book will be available for purchase