Continues its 2013-14 Season with Macbeth by Shakespeare 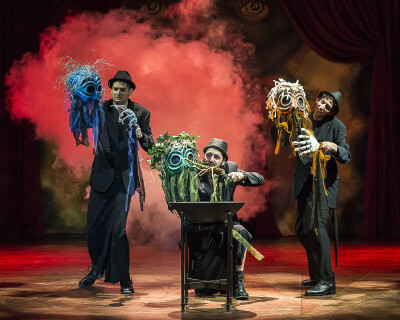 A Noise Within (ANW), the acclaimed classical repertory theatre company, continues its 2013-14 season with Macbeth by Shakespeare, to open on Saturday, March 15 and run through Sunday, May 11, 2014. Directed by Tony Award nominee Larry Carpenter, this marks the first time in eleven years that the company has presented The Bard’s timeless dark tragedy), which portrays the violent ambition of Macbeth and his wife, whose ascension to the Scottish throne through bloody means, ultimately causes their own demise.

Single ticket prices for Macbeth start at $34. Contact the A Noise Within box office in person, via phone at 626-356-3100, or online at www.ANoiseWithin.org for updated pricing and seat availability.

Larry Carpenter talks about his vision:  “I’ve directed a lot of Shakespeare, but this play is the one I keep returning to: fantastically well constructed, it contains some of the Bard’s absolute best poetry.  Macbeth is a present tense event where the characters dance with evil forces, and my staging includes the audience as participants. I am struck by the counterpoints of barrenness (which allows evil in) and fertility (that safeguards the future of the kingdom), and by Macbeth’s driving egoism.  In many ways, his narcissism and grandiosity–coupled with an unwavering ambition for power and notoriety—mirror aspects of our current American condition and character.”

Considered one of Shakespeare’s darkest and most powerful tragedies, the play dramatizes the corrosive psychological and political effects that result when evil is chosen as a means of appropriating political and personal power.  Written between 1603 and 1607, Macbeth tells the story of a brave Scottish general who hears witches prophesy that one day he will become King.  Consumed by ambition and spurred to action by his wife, Macbeth murders King Duncan and seizes the throne. Wracked with guilt and paranoia, he soon becomes a tyrannical ruler as he commits ever more murders to protect himself and his reign. The bloodbath and consequent civil war that ensue swiftly sweep Macbeth and Lady Macbeth into a chasm of arrogance, madness, and death.

The cast features Elijah Alexander* and Jules Willcox* as Macbeth and Lady Macbeth. Alexander, best known for his role in the film Mr. and Mrs. Smith, brings extensive Shakespearean background that includes performances at the Oregon Shakespeare Festival, Utah Shakespeare Festival and California Shakespeare Festival.  This is the second time he has portrayed Macbeth.  Jules Willcox was seen in last fall’s Pericles as Marina at A Noise Within and can be seen in the new CBS series Friends with Better Lives and the 2012 independent film Deadline.

This engagement of Macbeth includes a symposium with noted scholar Miranda Johnson-Haddad, who will discuss the play on Wednesday March 12 at 8PM prior to that evening’s performance, conversations after the performance with the artists of Macbeth on Friday, April 11 at 8pm, Sunday, April 27 at 2pm and Friday, May 9 at 8pm, and an ASL-interpreted performance on Friday may 9 at 8PM. Pay What You Will performance is Thursday, March 13 at 8PM.

Macbeth is generously supported by James and Travessa Terrile.

A Noise Within is located on the corner of Foothill Boulevard and Sierra Madre Villa Avenue at 3352 East Foothill Blvd., Pasadena, CA 91107.

About A Noise Within

A Noise Within performs and promotes classical theatre as an essential means for our community to confront the universal human experience, expand personal awareness and challenge individual perspectives.  A Noise Within’s mission is to produce world-class performances of the great works of drama in rotating repertory with a resident company; to educate and inspire the public through programs that foster an understanding and appreciation of history’s great plays and playwrights; and to train the next generation of classical theatre artists.

A Noise Within was founded in 1991. Operating out of a former Masonic Temple in Glendale, they staged a production of Hamlet that was accessible and relevant at a time when classic theatre was not widely performed in Los Angeles. The twenty-year evolution from a small neighborhood theatre to the current acclaimed repertory company has been marked by constantly raising the bar on what great classical theatre can be. The move to a new, permanent home provides A Noise Within with expanded artistic possibilities, a greater scope of educational opportunities, and the capacity to meet demand and reach its full potential.

A Noise Within Producing Artistic Directors Geoff Elliott and Julia Rodriguez-Elliott both hold a Bachelor of Fine Arts from the University of Florida and a Master of Fine Arts from San Francisco’s American Conservatory Theatre. In 1991, with a mere $3,000 from their personal savings account, they set an ambitious vision for ANW: to establish a home for the classics that would present a challenging repertory, take artistic risks, and ensure accessibility to diverse audiences. Through its founders’ and company’s passion and persistence, the theatre now ranks as the leading presenter of great world drama in Southern California.

Friday, May 9 at 8pm- ASL/Conversations

Pay What You Can Performance:  Thursday, March 13 at 7:30pm. Pay What You Can tickets go on sale at the box office window the day of the performance, starting at 2pm, and are sold on a cash-only basis based on availability; limit of two tickets per person.

Why American Arabs and Muslims need their own news blog Activism