April 4, 2016 (Washington) With more than 60 million people forcibly displaced in every region of the world, the Arab American Institute Foundation (AAIF) is proud to shine a light on those working on the frontlines to assist and empower refugees. UNHCR, the UN Refugee Agency and Unite Lebanon Youth Project (ULYP) will both receive awards for their outstanding work during AAIF’s annual Khalil Gibran Spirit of Humanity Awards on April 19. 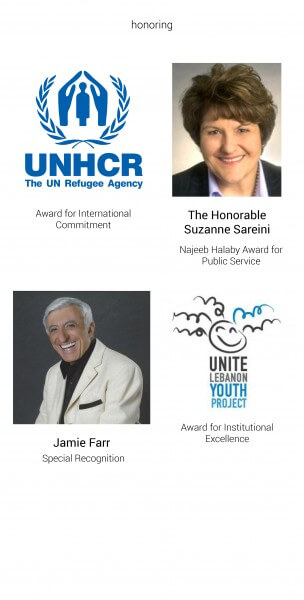 Highlighting the critical contributions refugees and former refugees can make to the world, supermodel, activist and former refugee Alek Wek will present UNHCR with its Gibran Award. Wek, who talks openly about her own harrowing journey fleeing Sudan’s civil war, works to bring awareness to the plight of refugees, especially the needs of women and children as a UNHCR Goodwill Ambassador.

Syrian refugee and violin virtuoso, Mariela Shaker, will also perform during the gala evening. Shaker fled her native Aleppo in 2013 to continue her music studies in the U.S. She’s been recognized by the White House as a Champion of Change and regularly confronts the negative rhetoric around the refugee situation by reminding her audiences of the very real humanitarian crisis facing millions of Syrians. Her dream is to open a music school for Syrian refugee children.

Globally, UNHCR is operating in 125 countries serving not only millions of refugees and stateless persons, but also millions of internally displaced people. The conditions are difficult and often dangerous as they work to provide for the most basic needs of those fleeing conflict, disaster and violence. Although some of its largest operations are in Afghanistan, Colombia, Democratic Republic of the Congo, Mali, Pakistan, Syria, Jordan, Lebanon, Turkey and Iraq they are also supporting those at risk in the Central African Republic, El Salvador, Honduras, Libya, Myanmar, South Sudan, Ukraine and Yemen among many other places. Whether the help provided comes in the form of a tent, blanket, or clean water, it ultimately means doing what is necessary to protect those most vulnerable. And, with so many children among the world’s refugee and displaced populations, it also means working to provide educational resources. In short, their mission is never ending.

In Lebanon, the Unite Lebanon Youth Project began as a project to help Palestinian refugees escape the physical and mental confines of the refugee camps, and has grown to include poor Lebanese youth and more recently, Syrian refugees. At their campus outside Beirut, ULYP gives these young people a chance to befriend one another, work together and ultimately create a better future for themselves and Lebanon. Through preschool classes, summer camps, scholarship programs and SAT tutoring, ULYP seeks to reach the most vulnerable with high quality, comprehensive education programs.

“With the refugee crisis at its highest level in 20 years, the Arab American Institute Foundation believes we all must do whatever possible to support, elevate and acknowledge the work of those empowering the world’s most vulnerable populations. That is why we’ve chosen UNHCR and the United Lebanon Youth Project as recipients of our 18th annual Kahlil Gibran Spirit of Humanity Awards,” said AAIF Executive Director Maya Berry.

The Kahlil Gibran “Spirit of Humanity” Awards was launched in 1999 to recognize individuals, corporations, organizations and communities whose work, commitment and support make a difference in promoting coexistence and inclusion in all walks of life. The awards are named for the author of The Prophet, whose message of human endurance and triumph was so evident in his life and work. The awards further symbolize Gibran’s pride in his Arab heritage, respect for the freedom he found in the United States and his universal love of humanity.

About AAIF: The Arab American Institute Foundation’s goal is to encourage, recognize, and celebrate Arab American participation in American civic life, and to cultivate and mobilize a strong, educated, empowered Arab American community that can play a meaningful role in developing and improving U.S. policies. A not-for-profit affiliate of the Arab American Institute (AAI), the Foundation supports programs that promote greater awareness of Arab Americans in the United States, demographic research and international outreach. The AAIF serves as the primary national resource on the Arab American experience for the media, academia, government agencies and the private sector. Through its numerous outreach programs, the AAIF builds leadership skills among students and young professionals and informs the American public, government agencies and organizations about the contributions and concerns of Americans of Arab descent.