Despite promising to release everything in President John F. Kennedy’s Assassination file on 26 April 2018, Mr. Trump did NOT.

The National Archives have so far released 19,045 JFK assassination files. The 25-year deadline established by the 1992 JFK Records Collection Act to release the remaining files expired last week, yet we the people remain in the dark with no guarantee we will ever read what the Feds have.

Last Thursday Mr. Trump announced that the public must wait another three or more years before seeing the files because of “national security reasons” despite the passage of more than five decades since Kennedy was killed in Dallas, Texas.

Researches at The Mary Ferrell Foundation have also discovered an additional 21,890 documents that are being withheld in full or in part.

Millions of pages were made public during the mid-1990s but several thousand more are held back despite their scheduled release last October, on the 25th anniversary of the law’s passage when 2,800 files about the 1963 murder were made public including files regarding the Soviet spy agency KGB’s belief that Vice President Lyndon Johnson may have conspired to assassinate Kennedy.

Last October Trump yielded to objections from the CIA and FBI, to withhold several thousand of the files for an additional six months, which ended on 26 April 2018.

Mr. Trump said the potential harm to U.S. national security, law enforcement or foreign affairs is “of such gravity that it outweighs the public interest in immediate disclosure.”

Mr. Trump ordered the CIA and other agencies to take yet another look at each blacked-out section of the documents over the next three years to see what more can be released- or remain withheld from we the people.

In 1992, Congress passed the JFK Assassination Records Collection Act, which were to keep the files sealed until 2029.

However Oliver Stone’s 1991 film, JFK, caused a public uproar and elected officials were contacted en masse by constituents calling for the case to be reexamined.

Congress responded by scheduling a release date of the JFK-era documents hoping that the Act would quell the growing tide of conspiracy theories that were weaving the mob, Fidel Castro, Russia and the CIA into a plot to kill Kennedy.

On April 26 Mr. Trump failed to release all the JFK assassination files as promised at twitter on 21 October 2017.

In response Cynthia McKinney tweeted “…why we the people can’t see ALL of the JFK documents? I heard Mordechai Vanunu on this matter!” 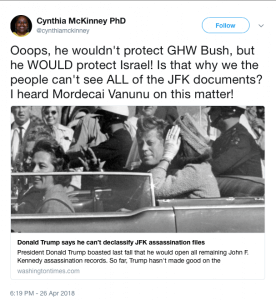 I do not know what McKinney heard Vanunu say, but I can report:

In 2004, in the Arabic supplement Al-Wassat, an interview was published quoting Vanunu stating that according to “near-certain indications”, Kennedy was assassinated due to “pressure he exerted on then head of government, David Ben-Gurion, to shed light on Dimona’s nuclear reactor. We do not know which irresponsible Israeli prime minister will take office and decide to use nuclear weapons in the struggle against neighboring Arab countries. What has already been exposed about the weapons Israel is holding can destroy the region and kill millions.”

Did you know that President Kennedy tried to stop Israel from building atomic weapons? In 1963, he forced Prime Minister Ben Guirion to admit the Dimona was not a textile plant, as the sign outside proclaimed, but a nuclear plant. The Prime Minister said, ‘The nuclear reactor is only for peace.’ Kennedy insisted on an open internal inspection. He wrote letters demanding that Ben Guirion open up the Dimona for inspection.

When Johnson became president, he made an agreement with Israel that two senators would come every year to inspect. Before the senators would visit, the Israelis would build a wall to block the underground elevators and stairways. From 1963 to ’69, the senators came, but they never knew about the wall that hid the rest of the Dimona from them. Nixon stopped the inspections and agreed to ignore the situation. As a result, Israel increased production. In 1986, there were over two hundred bombs. Today, they may have enough plutonium for ten bombs a year.

In this American’s UNCENSORED “30 Minutes with Vanunu” interview, Israel’s WMD whistle blower doesn’t talk about JFK, but he does speak about state torture via solitary confinement, the “real wailing wall-the apartheid wall” and he sends a message to every American with special attention to “all the Christians.”

Jesus was a Palestinian, and many Palestinians were Jews Bloggers
Cairo Institute condemns crackdown on Palestinian activists Arab World